Home Music Bands The Dead Tremors: Our Future Lies In The Past – EP review 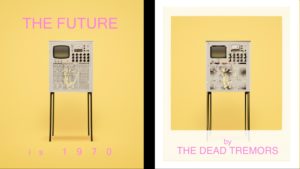 The Dead Tremors – Our Future Lies In The Past

Louder than War’s Ioan Humphreys has the first listen to Dan McRae’s latest output as The Dead Tremors.

The Dead Tremors is the latest guise of Dan McRae aka Thin Films whom I’ve followed for the last couple of years. He describes The Dead Tremors as a ‘retro wave project’ that will be released on his own Thin Recordings label.

The two track EP, Our Future Lies In The Past, starts with the title track and starts with an eerie slow intro that leads into atmospheric percussion, an insistent string accompaniment until it suddenly erupts into a full on euphoric dance track replete with almost military style drumming. It’s very reminiscent of Blanck Mass’s recent output.

Follow up track, The Future Is 1970, has a slow build up to an eventual sublime retro electronica sound with a very danceable beat and is very Kraftwerk in its influences. The retro synth sounds and sound effects that The Dead Tremors use are just sublime and take one back to the days of early Dr Who,  The Quartermass Experiment and Day of the Triffids.

They are a beautiful homage to the forgotten sounds and effects that a certain generation grew up with. They are a celebration of the afore-mentioned programmes, however this two track EP is by no means a backward step. These sounds are as relevant as they ever have been and need to be heard for the next generation and are often criminally underrepresented and/or ignored. The Dead Tremors are actually providing a public service! Have a listen and enjoy.

The Dead Tremors and other Thin Films related music can be found on their Soundcloud.