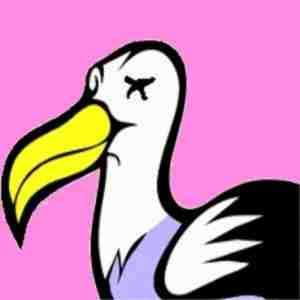 Tonight, in a special radio show broadcast live on his Kamikaze Reel Rebel’s Radio show, Paul Ackroyd will be counting down to the winner of the 2015 Dead Albatross Prize. Details regarding how to tune in – and more – can be found below.

A couple of weeks ago we rounded up what had been going on over at Dead Albatross Prize HQ – the home to the only UK wide annual music prize that matters. Now we have details of how to find out who the winner is LIVE and another roundup of links to more essential reading and listening matter pertinent to the amazing albums the prize has chosen for its shortlist.

The Dead Albatross Prize finale show kicks off at 830 tonight on reel rebels (reelrebelsradio.com/listen). During the show there’ll be a rundown through the shortlist before the final countdown of the top 5 albums (which’ll be at the end – in time honoured fashion). Listen live and / or  jump into the chatroom and / or hit the prize up on twitter @funfairbonanza where the hashtag’s #deadalbatross.

Meanwhile, there have been radio shows going online about all the nominated albums which have all been collected together on Mixcloud – and there have been blogs on the prizes website over here..

On top of all the above there’s loads of other bonus material up there including:

“An interview with jazzman about the ‘a new life’ compilation, a mix of the outer reaches of night school records, a stunningly beautiful mix from annabel (lee), a muslimgauze documentary, a mix from front & follow records, a radio show with the audacious art experiment, a laura cannell mix, a mix from michael valentine west, and a mix from liberez.”

So what are you waiting for? Go check out all that amazing stuff asap, while also remembering to tune your trannies (or computers, even) into reelrebelsradio.com at 8:30 tonight!