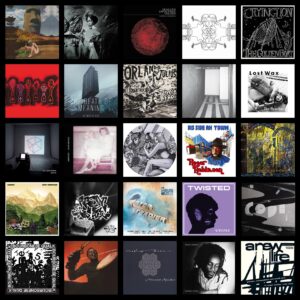 The Dead Albatross Prize – formerly known as a Mercury Music Prize alternative – has just announced its shortlist – and a mighty fine collection of albums it is too. Check them out below, where you’ll also find a Mixcloud stream which offers to help you “meet the shortlist” properly – via music.

Tip: click on the image to the right to see it full size. (It’s the cover art of all twenty-five albums if you hadn’t already figured that out!)

“Twenty-five albums?” you say “But we thought the winner was traditionally chosen from just twenty albums. What on earth gives?” Good question. This year the regular prize is being supplemented with one for the best reissue | archive  | compilation | retrospective album, so five of the albums fall into that category. As you’ll see below.

We recently ran a blog on Louder Than War about this year’s prize, please visit this link if you’d like more information.

Remember, these are the two requirements each album must make to be considered eligible for the prize…

Votes from the judging panel (which now numbers over 100) need to be in by Sunday 25th October, with the winner announced via a radio show on reelrebelsradio.com shortly thereafter.

So with no further ado…

For more information about the prize hit up it’s website (which will in time have detailed information about each album) here: deadalbatross.com. And to keep up to date with DAP things, check it out on Facebook and /or twitter: as @funfairbonanza.

Oh – and if you’re interested in having a say on the outcome of the prize go here: deadalbatross.com/p/vote.html.

The mastermind of the prize, one Paul Ackroyd, has recorded a radio show titled “Dead Albatross 2015: Meet The Shortlist” which does pretty much what it says on the tin.

Dead Albatross 2015 : Meet The Shortlist by Kamikaze on Mixcloud