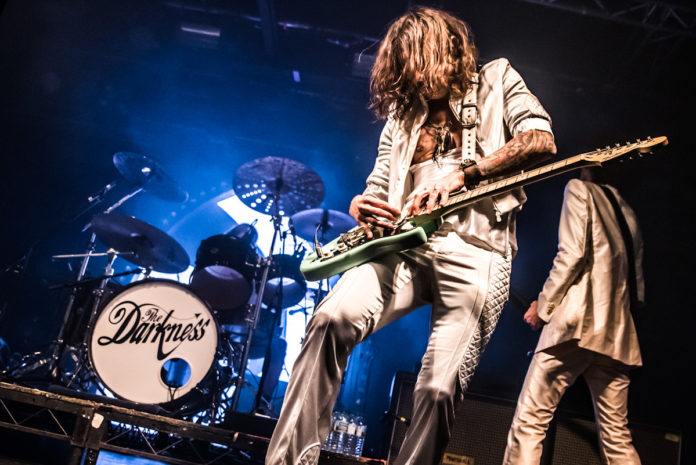 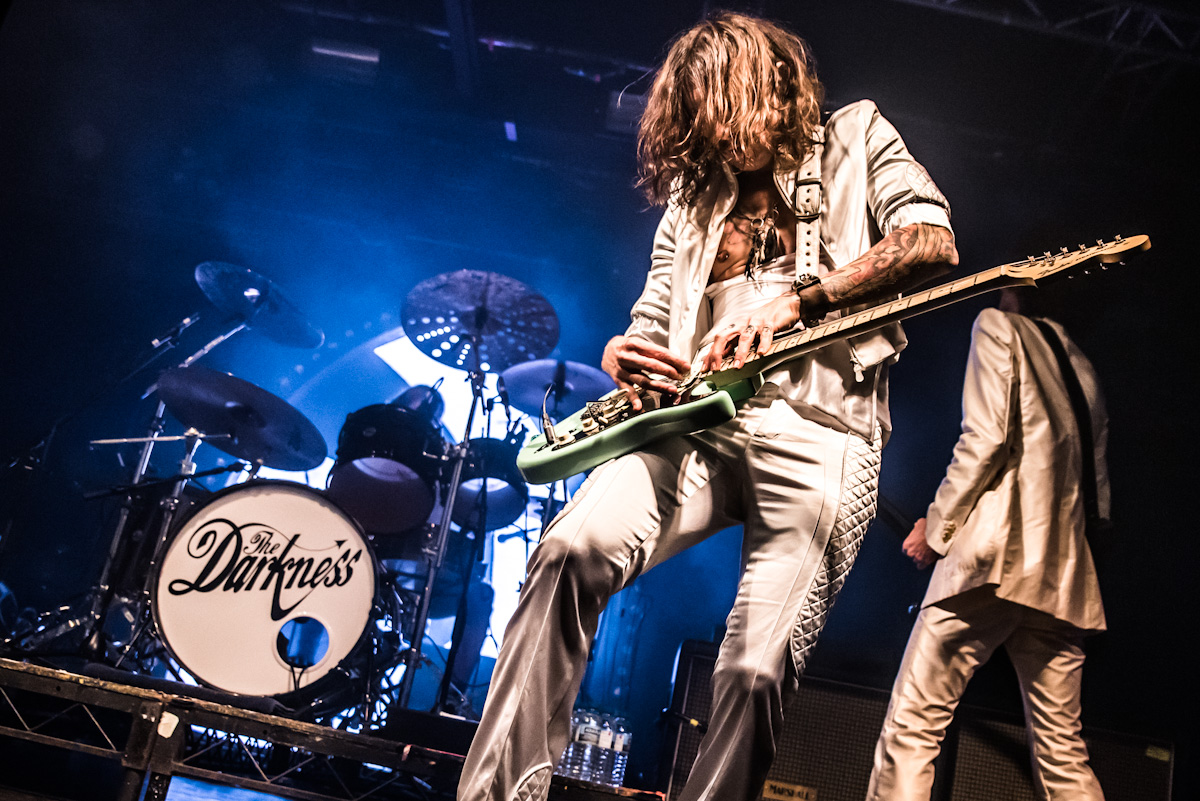 An eye-watering display of guitar wizardry, catsuits, and falsetto screams. The Darkness proves once again what we all knew – the world needs more cowbell.

“Put your phone down, get involved, or fuck off.” Justin screams at audience members too busy filming to stick their hands in the air. It’s the last song of the night, ‘Don’t let the bells end.’ And what an interesting night it’s been at the Manchester Academy. If nothing else, The Darkness have once again solidified themselves as a force to be reckoned over the two juxtaposing sets.

Nothing says ‘The Darkness’ more than putting an audience through an album they barely know just because you can. Tonight’s theatrics kick off with the band playing the entire Easter is Cancelled album from top to bottom. If anyone can pull off that sort of rock n’ roll audacity, it’s this lot. 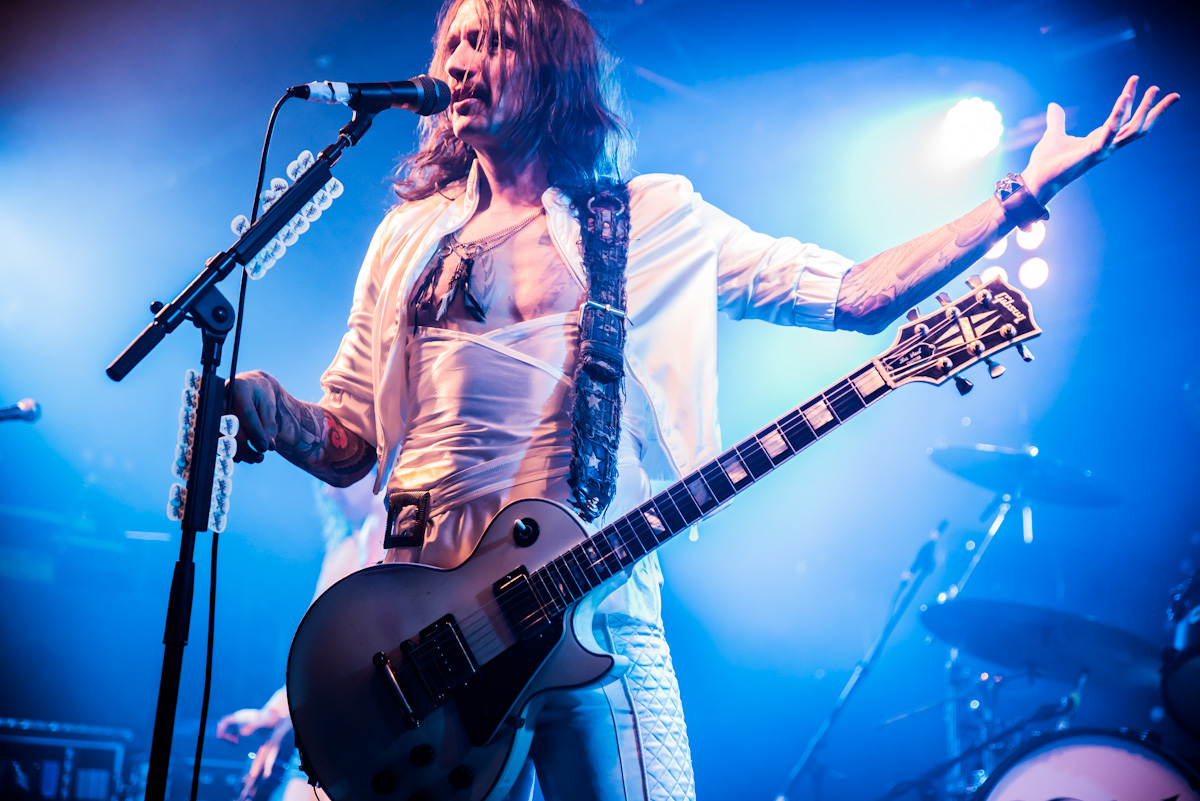 The crowd seem pretty engaged for the most part. The opening track, Rock ‘n Roll Deserves to Die, starts things with a bang as the Hawkins brothers don Fender guitars for the one and only time of the night. Dan bounces (with the help of his guitar tech) from electric to acoustic (and back) about three times during the opener.

Third track Live ‘Til I Die, an ode to the brothers’ family roots, sees a backdrop of old family photos – based around Justin, of course. Deck Chair (a song that, from what I can tell is literally about how much Justin likes being sat in a deck chair) sees Dan taking bass duties and bass player Frankie Poullain taking up the acoustic guitar and synth. Justin closes what feels like quite a serious first set with an acoustic version of We Are the Guitar Men.

The lights go down and a skinny white suit takes the stage. Frankie Poullain and his cowbell approach the mic – they play back and forth with the crowd before counting in for the band to join in for One Way Ticket. The atmosphere, much like Justin’s catsuit, has changed. The seriousness is no longer, the crowd begins to bounce and sing. 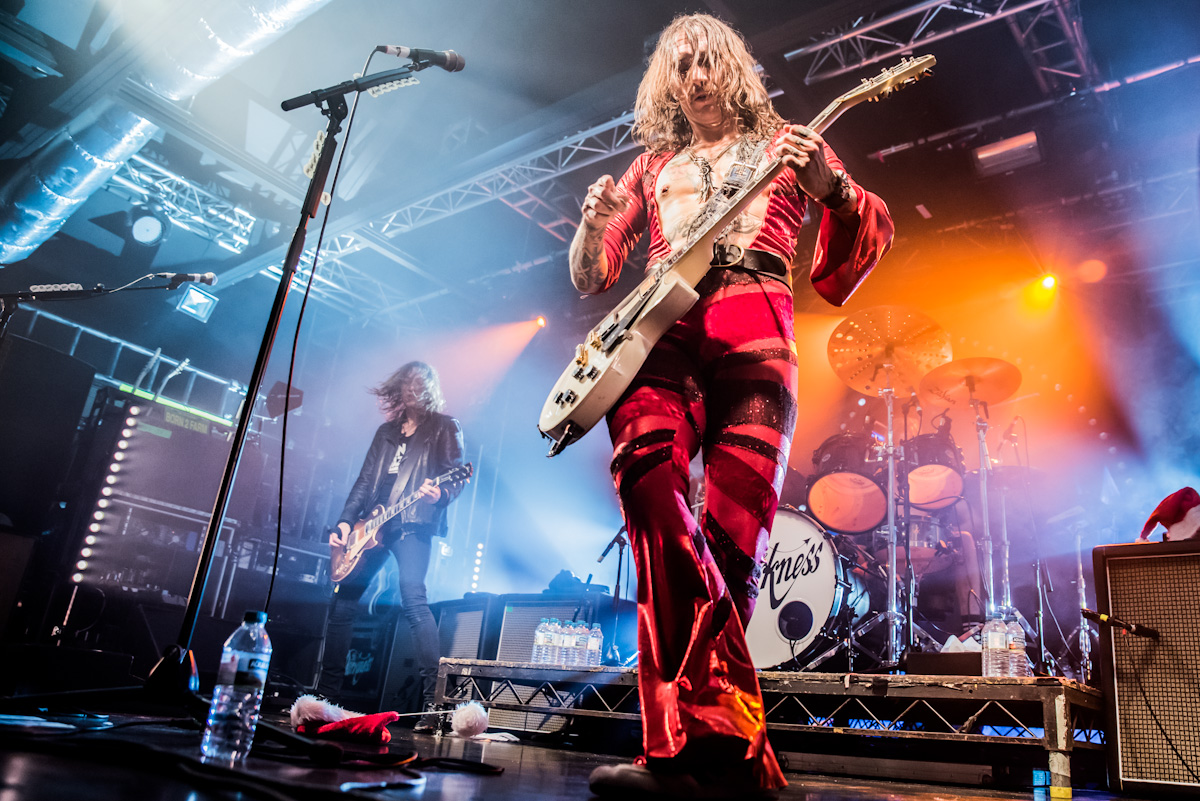 What follows next is the best of the best setlist of rock n’ roll fancy. Songs you’d forgotten were great, songs you always knew were. A sheer fucking masterclass of guitar, bass and drums. This is what The Darkness do best – please.

“You’ve waited for 13 songs to hear something from Permission to Land. Well done!” Justin says before launching into Growing on Me.

This set is every rock n’ roll cliche in the book stuffed into 50 minutes. There are handstands, outfit changes and the sort of pouted lips that belong only on Instagram. But you know what? It’s fucking great.

“You want to come and play with us?” Justin replies to a crowd request. “Yeah? Fuck no!” the frontman laughs as the band take off into their cover of Radiohead’s Street Spirit. The thrash metal rendition ebbs and flows as they mix in lines from The Beatles’ While My Guitar Gently Weeps. 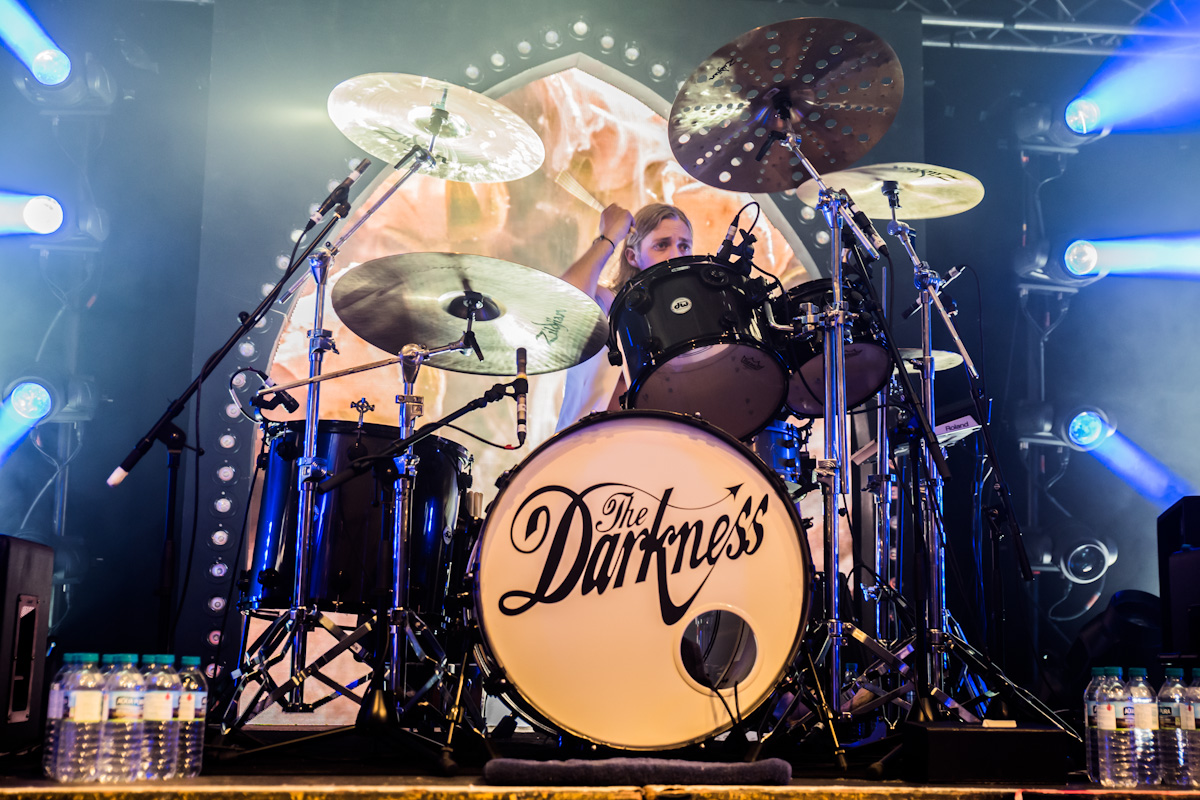 There’s even a nod to the crowd’s homeland during a short rendition of Oasis’s Supersonic. Every leather jacket in the house suddenly pretends they don’t loathe the Mancunian band as they sing along. As one might expect, set closer I Believe in a Thing Called Love gets the most out of the crowd. The middle-aged women in front of me play air guitar and bounce their heads in unison – much to the bemusement and embarrassment of their partners.

Nobody thought these guys would still be here 15 years after Permission to Land. I certainly didn’t. Nobody thought Justin would survive multiple addictions and bulimia – critics wrote them off as a joke or a cliche. Tonight was, if nothing else, a big middle finger to all those that doubted them. They’re still here, still belting out notes that men half their age wouldn’t even dream of, still playing some of the most gobsmacking guitar leads in rock n’ roll.

At a time when rock has become serious, stale and politically correct, The Darkness are a breath of fresh air in an otherwise grey landscape.

Photos are taken at the Liverpool show by Michael Bond. More work by Michael can find on Facebook and Twitter. His photography portfolio can be found here.