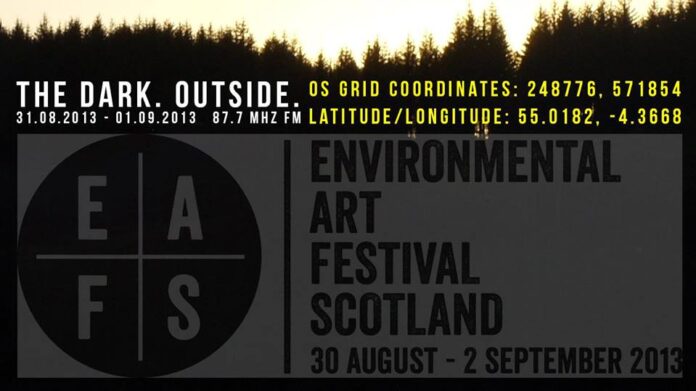 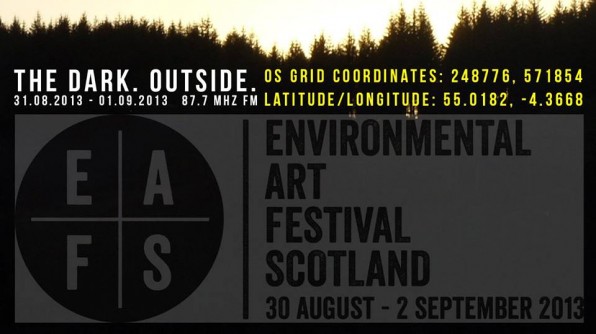 The Dark Outside is the brainchild of one Stuart McLean, aka Frenchbloke, who plays 24 hours of music that nobody has ever heard to the Galloway Forest where nobody might be listening (except goats, red kites, deer, assorted wildlife and any humans who make the pilgrimage of course). This year’s The Dark Outside takes place on the 27th September and you can find more info about this brilliant, unique project below, along with a list of artists already confirmed to play and details regarding how to submit music if you wish to participate.

The original idea for The Dark Outside stemmed from a collaboration back in 2012 between Robbie Coleman and Jo Hodges who were Artists in Residence for the Galloway Forest Dark Skies Park and The Galloway and Southern Ayrshire Biosphere. They hooked up with music producer Frenchbloke who curated a 24 hour radio broadcast of previously unheard sound which was broadcast during August 2012.

“The basic premise for this  goes back to 2012 when I was given free reign over a FM transmitter for 24 hours and came up with the idea of broadcasting music nobody had previously heard in a place where nobody would hear them unless they went into a forest. “

All the pieces of music played are unique, one off creations which artists submit to Frenchbloke to be played once and once only – quite possibly to no human ears. After the performance the music will mainly be destroyed, never to be heard again, although some previous submissions have subsequently made their way onto albums, singles or limited free download.

Everyone is welcome to go up to Scotland to listen and you may do so sat outside, in your car, hiking the hills or however you like. Just remember to bring a radio!

This year’s broadcast is on 27th September and runs from noon until noon the next day. A list of music already confirmed is here:

Keep your eyes peeled on that page as new artists are regularly being confirmed and that list growing. There are no restrictions to music that can be submitted. As Frenchbloke says:

“Although it looks like it’s a more leftfield electronic centric event, there is no overall preference of genre. Everything is welcome and as long as nobody has heard it before (or very few people) then it’s as good as in.”

They will also be using lights and projections as it gets dark and there will be:

“…books to read and take home with you supplied by The Random Book Club in cahoots with The Wigtown Book Festival.”

Artists so far confirmed for 2014 include:

For anyone wanting to take part, all you have to do is :

The obligatory The Dark. Outside. Facebook event page is here – tick going to receive updates. You can also keep up to speed by following the Dark Outside Tumblr. Frenchbloke is also on twitter: @frenchbloke.