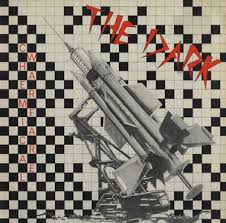 Reissue of the sole LP by ill-fated Islington Punks the Dark with associated single sides….LTW’s Ian Canty looks back on a band that slipped under the radar despite (or perhaps because of?) their links with Hanoi Rocks, Alien Sex Fiend and Menace…

There were quite a few bands like North Londoners the Dark around in the early part of the 1980s, though it might not seem that way today, as they’re almost totally forgotten. Not fitting into either the Oi! or Anarcho Punk templates, they (along a few others, like the Wall, Action Pact, Dead Man’s Shadow, possibly Charge and even Chron Gen to a certain extent) played a more tuneful version of Punk and were not afraid to delve into more accessible New Wave or experimental Post Punk areas at times. The Dark, sometimes in a theatrical fashion akin to the coming “Positive Punk” scene, explored these kind of ideas though not actually qualifying in either sort of genre as bona fide. But by having this slightly freer and more open minded approach meant they could extend into areas not explored by the more “cookie cutter” acts.

Like the Wall, the Dark were a mainstay of the Fresh Records roster, issuing five singles and an album on the imprint which are all included here. Built around the talents of bassist/vocalist Phil Langham and guitarist Andy Riff (though John Flannagan sang on their first single “My Friends”/”John Wayne”, this disc produced by Steve Tannett, beginning the Menace connection), the Dark formed in late 1978 and encouraged by ex-Menace drummer Noel Martin (who became their manager) they had by the time of “Chemical Warfare” built up a decent following and had some success in the Independent charts.

Lead guitarist John Bryson had joined the band by now, he was an ex-member of Small Wonder band Demon Preacher (who also included Nik, soon to lead Alien Sex Fiend and drummer Razzle who would later occupy the Dark’s drum stool) The album itself lurching between heads down, no nonsense Punky Rock with a Gothic edge and a more reflective, experimental side. A re-recording of the flip of their first single, now entitled “The Ballad Of John Wayne”, an atmospheric and foreboding “Masque” and the very New Wave “Pleasure Is Pain” (sung by Bryson) are the highlights here for me, with “Soldier Dolls” being an excellent album closer. Though a perfectly serviceable record, the singles really prove the true worth of the band, a reasonably straight, Dickies style version of the “Hawaii Five-O” theme being the weak link, otherwise “Einstein’s Brain”, “On The Wires”, “The Masque” and their respective b-sides shine.

Soon after the live album on Fall Out in late ’82 “The Living Dead” (by this time Charlie Casey had joined the band, bringing the number of Menace members participating in the Dark’s career to three) the band split up with Razzle going on to join Hanoi Rocks and Phil launching Cherry Red’s Punk off-shoot Anagram and producing Action Pact (who he joined at one point) among others. Both were to die tragically young, bringing the Dark’s story to a sad close.

Though perhaps not quite up there with the best of the bands in that time frame, “Chemical Warfare” is a good listen and the singles tracks retain their considerable charm, particularly “The Masque”. The Dark had talent but for one reason or another could not quite break into the big leagues, though at that point in time to do so they would have needed to have made themselves into a much more straightforward proposition – this kind of move would have also had the negative effect of taking away a large part of their identity. But we should appreciate them for what they were, a more than decent band that took the odd risk in a time when most played it safe.