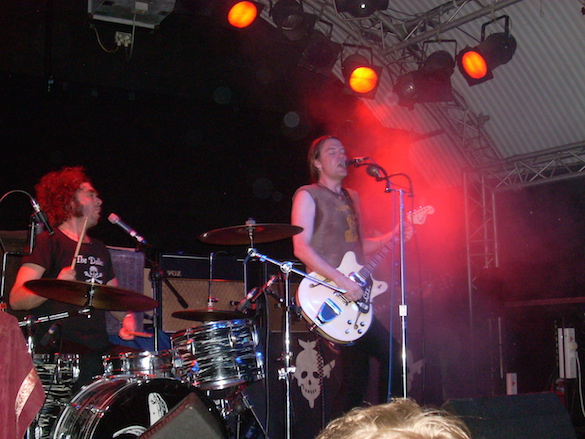 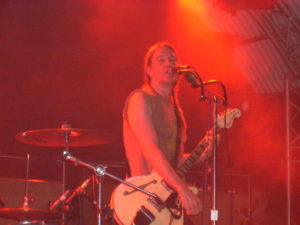 Seminal rock act The Dandy Warhols have been on the road during June / July touring in support of their latest release, a live album titled Thirteen Tales From Urban Bohemia Live At The Wonder. Louder Than War’s Andy Santiago was at the band’s Leeds show.

My first encounter with The Dandy Warhols was around 1998 at the ‘London Calling’ festival in Amsterdam where I found their brand of ‘Psych Rock’ (for want of a better description) perfect for the surroundings, my state of mind and the occasion.

It was the release of the classic “Come Down” album that really did it for me and in the shared house I lived in at that time, it was a pretty constant soundtrack to all manner of late night and very early morning activities.

The Dandy Warhols were a regular fixture on festival stages and consistently toured, so I ended up going to see them live many times and they were always nothing short of excellent, so when I heard about this latest UK tour, I headed off to Leeds to see them again.

Many bands strive to attain the elusive quality known as “cool”, with The Dandy Warhols, it’s completely natural, everything about them can be described as “cool”, and it’s effortless. Their self-assured swagger while at the same time, carefree and laid back attitude all add up to the elusive “cool” and they have it in buckets.

Iggy’s “Lust for Life” smashes through the PA in the inferno-like temperature of a rammed Cockpit in Leeds and The Dandy Warhols amble on stage and plug in. 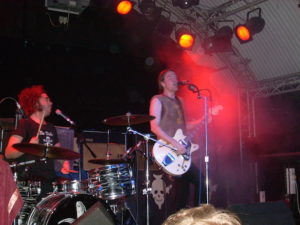 The towering figure of frontman Courtney Taylor Taylor starts to pick out the intro to the superb choice of set opener, “Be In” from the previously mentioned “Come Down” album, the rest of the band join in, creating this unbelievably powerful, tripped out sound that is unique to The Dandy Warhols.

The almost industrial-tinged “We used to be Friends” immediately follows and has the packed crowd jumping from the start.

“Is it just me or is it fucking freezing in here?” asks Courtney as the temperature in the already boiling room goes up another few degrees, before tearing through one of the songs that is most associated with The Dandy Warhols, “Not if you were the last Junkie on Earth” with its ironic “Heroin is so passé” refrain. The crowd getting in on supporting vocals.

It’s clear the band are having a great time with keyboardist, occasional bass player and shaker of various items, Zia, constantly engaging with the front rows with beaming smiles and waves whilst on the opposite side of the stage, guitarist Pete remains aloof and distant whilst pulling some quite outrageously understated rock god moves.

Next up was the pinnacle of the gig for me in the shape of “Ride”. A huge riff-driven wall of psychedelic noise with a wonderful undercurrent of melodic drone. The volume seemed to increase and the relentless strobes only enhanced what was already quite magnificent.

The band have a large back catalogue of quality material so it was always going to be unpredictable as to what would feature in the set. From the Bowie-esque “The Last High” to more recent songs such as “Sad Vacation”, the band covered all areas. 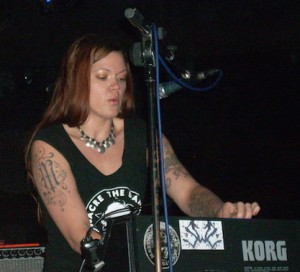 About half way though the gig all the band except Courtney leave the stage for what he described as “A party break” (I wonder what that could mean??) and asks “Do you guys know the words to Everyday should be a Holiday?”. The crowd response signifies we do, so a slower, stripped down version with just him strumming it out and everyone singing along is played. The crowd gets loud and Courtney looks a little overwhelmed. In a cool as ice way, obviously.

It was kind of inevitable that as it was recently the thirteenth anniversary of the absolute classic album “Thirteen Tales From Urban Bohemia” that the set would be quite heavy on that material. This turned out to be the case and from the all-out rock assault of “Horse Pills”, the grooves of “Solid” to the crowd filling in for the trumpet part on “Godless”, the songs sounded as good as they ever did.

“Here’s a song you probably know” said Zia before “Bohemian Like You”. As great a song as it is, it always saddens me slightly that this is THE song associated with The Dandy Warhols, the fact it’s a classic is indisputable, but there’s so much more to them than just this one song.

Anyway, the packed Monday night crowd go suitably ballistic and if the band are tired of playing it, it certainly isn’t apparent and look like they’re having a blast.

A near 2 hour set is drawing to a close, the duo of “Pete International Airport” and a monstrous rendition of “Boys Better” that brings back that wall of sound mentioned earlier ends the night with Pete at the front of the stage, doing his best Townshend, windmilling like crazy. A few words of thanks and all but Zia leave the stage, she makes some twiddly, electro noises with her keyboards for a couple of minutes, thanks us and also leaves.

I was talking to one of my mates earlier yesterday about going to the gig and he said “Oh The Dandy Warhols? I didn’t know they were still going”

Indeed they are and there are two simple reasons for this. Firstly, quality will always be enduring and secondly, put bluntly, they are fucking brilliant. And the huge crowd that turned out on a Monday night in Leeds will testify to that.

The Dandy Warhols can be found at their website and at their Facebook, MySpace and SoundCloud pages.