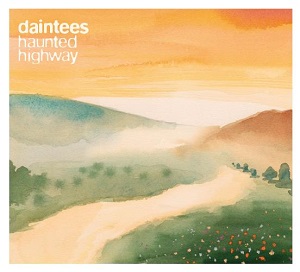 Martin recently claimed that he reckons Haunted Highway is the best Daintees album yet. That’s quite a bold statement from the man who has such a huge back catalogue. Sure, he will say every new album is his best, but he can genuinely say that this new collection is up there. He may be tired of hearing about Boat To Bolivia, but to be fair to everyone that has bought it they will never be bored of its brilliance. If 2012s California Star was one of the highlights of his career then Haunted Highway takes it to new heights.

If you’ve never listened to any of his music then you’ve missed out. The Geordie is one of Britain’s finest songwriters, ever. Again, a bold statement but true. His amazing talent to craft songs of every emotion and almost every style is second to none. He is, my friends, a musical genius.

Officially released in February 2015, it will be available at some of his Xmas shows, and why not make use of sell-out gigs annually held at The Cluny in Newcastle to sell his wares? As album opener, Stansted Ground mentions “I don’t really give a shit” he’s probably a bit of a closet anarchist.

The album opener is pure class in terms of song construction, melody and content. It’s an instant toe-tapper and presumably written about a journey from home via plane to meeting partner Helen McCookerybook. It’s affectionate, it’s pristine and it’s classic Stephenson.

Much of the album is classic Stephenson, second track Wishing Stone sees the tone move from full band to lone acoustic guitar as he wears his lovely heart on his sincere sleeve. Bliss. The first of two instrumentals, Mahina has echoes of Hank Marvin in both style of construction recalling hints of the cowboy West with well-timed drum and guitar breaks.

Hobo Trains is textbook Country. June Cash would have been proud to record this and if you try hard enough, you can almost imagine her singing it with her yelps and whoops. Its rousing chorus is instant and memorable and my six year old daughter went berserk at the drum interlude provided by Martin’s sister Kate. The title track remains with a Country feel too with Martin’s voice sounding as good as it ever has – soft and gentle with every syllable perfectly recited.

And so the album progresses, Black Eyed Rose could have quite easily been a part of Boat To Bolivia. Another love song wrapped around God’s Plan sees the band rock things up with an exciting feel and Johnny Red heads to the return of another Hank induced instrumental.

Rockabilly-a-go-go with Backhouse Tipping slowly brings the deceptively short album to an end with more of the same. One of the many album highlights is the incredible Let Your True Love Show, a simple reggae based track which has some of the most subtle dubs and reverbs you will hear this side of wherever. Maybe akin to Wholly Humble Heart in feel and passion and echoing the dub sections of both that song and Boat To Bolivia. It’s a lesson in simple, classic song writing. A dub album from the man would be something to savour.

Closing with eleventh track Ride you can’t help feeling energised. Haunted Highway is the work of a man at the top of his game after nearly thirty-three years as a recording artist and the perfect album to discover the talents of one of music’s greatest modern day talents before delving into his ample back catalogue.

If all this wasn’t enough, the first three hundred copies of the album come with a twenty track cd, We Are The Llama which features tracks from Barbaraville artists over the years.

The Daintees’ best album yet? Probably.