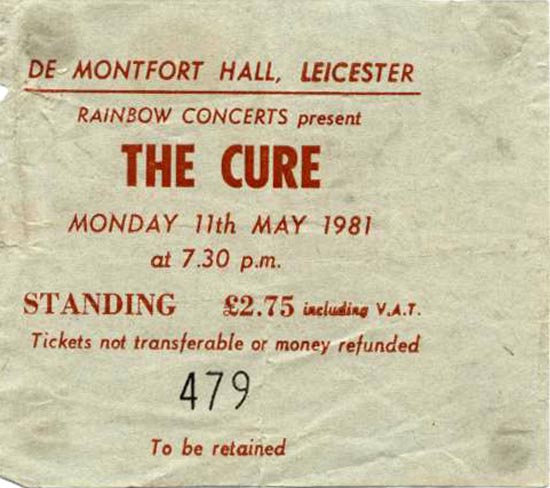 It feels strange that something that once felt so much like the future is now part of an historic past. 40 years ago as post punk began to coalesce The Cure were one of the prime movers accelerating into the future. The band were taking a darker sound deeper and further than anyone else in the post Joy Division world with their new album Faith that had been released four weeks previously.

The second part of the band’s doom trilogy of albums, Faith, was an immersive and brilliant work that confounded the music press but saw the band create a new soundscape and as The Cure rolled into Leicester Montford Hall for the accompanying tour supporting that album it positioned them on the frontline of the new dark.

We had hitch hiked down from Stafford Poly where I was kicking my heals for a year before getting thrown out and went to spend one of those eternal mad weekends of youth with Martin Kelly, the Membranes former keyboard player, who was eking out a degree at Leicester Poly.

Timing it perfectly for the Cure gig that was a week after my 20th birthday we got to the venue early and waited for another aural adventure with one of the best bands of the period and one who were creating signposts for a post punk journey with their stark new mood minimalism.

Things were changing fast since punk had profoundly impacted our lives. In our own micro way we were part of that process as well, fumbling out of the wreckage of post punk and trying to get into tune with the future. The Cure were high profile adventurers in this post punk fallout that had been taking a darker turn since the impact of Joy Division and that iconic Manchester bands mesmerising Martin Hannet produced landscapes that had already had a profound affect on contemporary bands.

The death of Ian Curtis had accentuated this and if, in the tragic singer’s lifetime, the band had been a small but fierce cult playing to audiences of barely a couple of hundred in awe spectators they were now finally being embraced in their absence. Many fellow travellers had been deeply affected by their sensual sensitivity and dark visions and the Cure where part of that world creating their own visionary masterpieces from the new moods that saw them, at the time, seen as the band most likely to go deeper and darker than the Manchester group.

The 17 Seconds album and tour had seen a move to a darker, more linear sound that had not only been affected by the JD’s and but also but their association with the Siouxsie And The Banshees whose powerful influence and ground breaking music with their own first two albums seems to have been neatly expunged from the general narrative. The Cure had been the support band on the fateful Banshees Sept 1979 tour when the ground breaking drummer Kenny Norris and guitar player John Mckay had quit after the first date in Aberdeen and Smith was drafted in to play guitar for the iconic band whose own mystic web of stark, dark psychedelia had imbued his own vision and music and even sartorial style.

The Cure had moved swiftly and and embraced these ground breaking new styles, making them their own and musically and image wise and felt not only part of this new world but a key game changer in it as they took the stage in Leicester all those decades ago.

The three imaginary boys had been restless and creative. Initially a quirky Neo Buzzcocks art rock band who had entered our lives c/o the usual John Peel session they had now morphed into a proto dark matter outfit. In the days before the word Goth was thrust upon anyone daring to explore the melancholy they were a key part of the post punk alternative scene. The debut album had been great – a stripped down affair where every instrument seemed to be in an unexpected place, of course Smith hates the sound of the album now but to the listener it was a intriguing and very modern trip. It was a pop. A new kind of pop. Oddly it felt closer to those new terrains that bands like XTC or Wire were playing with – post punk pop perfectionists who were dislocating guitar bass and drums and putting them back together in a different order and with an added minimalism.

Accelerating out of punk it felt like music was really moving and if, in the future, it would take these bands on very different trajectories, in 1981 they seemed to be toying with the same as yet unnamed space. It didn’t really feel like post punk then. Punk didn’t feel like it was over and its ripples and repercussions were still being felt as the newer bands emerging from the wreckage were looking for their own narratives and daring to play around in the mainstream before everything slid back into the underground and the dour resistance of the next wave of bands who made fine music but whose impact was less than zero.

1981 Cure was a band in-between days so to speak. The Home Counties oxfam chic of the earlier line up was now replaced by a darker sound and look that they had immersed themselves in with the preceding 17 Seconds album. The new minimalism and mood was thrillingly immersive. There was also now a smudged eye linger, teased hair, leather jacket cool. Smith’s flat top was now a well managed bird’s nest on its way to the glorious psychedelic tendrils of his later stylings. There was more than a whiff of darkness to the proceedings and if the preceding 17 Seconds album had taken the band on a different route – Faith was a further trip into this art of darkness that we welcomed.

The 1981 Cure were pushing into a brave new world of pop culture which their live take underlined. Always a great live band their bass driven songs now toyed with stark terrain and space. A space that played with mood and texture with the bass guitar now the spine and key like in much post punk. The profound affect of the Stranglers JJ Burnel was being felt across many bands and the final piece in the Cure jigsaw, Simon Gallup who had joined for the preceding album, was one of the many acolytes of the black belt bass style of the loose cannon Strangler and even had some of his slinky moves that somehow saw the bass itself not only cranked up to a shuddering lead role but also become somehow a physical part of the player’s body.

The Cure, though, had found their own space and the semi hit of A Forest was already an alternative club staple and key part of their live set. They were dealing in an introspection and gloom but creating hypnotic and powerful gigs that pulled you in mentally and physically. Setting the scene they were supported by an art rock assemblage film created by Gallup’s brother called Carnage Visors that was soundtracked by the band themselves. This was very 1981 and part of the deconstruction of trad rock and trying out new ways to create gig space and pull away from the tried and tested. As the film flickered away the tension and expectation built in the room. The audience was a mixture of fanzine heads, proto goths, alternatives and art punks and students out on the piss.

Smith was, as ever, taciturn as the band rattled through their set with his singing voice defining melancholy and making him the pin up boy for the dispossessed dark set . They quickly laid their cards on the table with the intro song from the new album, The Holy Hour, driven by the chorus laden bass creating the then futuristic swirling sound of the pedal and hanging in the air taking full advantage of the song’s skeletal future sound and structure. The music created an introspective and dank atmosphere that drew you into its cobweb matrix of shadowy sound. The set list culled from the first three album was leaning heavily on the new dark and the older songs like 10.15 Saturday Night seemed to have new shadows in their mix and new darker avenues that hadn’t seemed to exist before.

The material from the Faith album may not have been designed for live mosh pit action but the spectral shivers  on Other Voices or the Funeral Party were powerful enough to hold the room in a dark trance. A Forest may have felt like the end of the set when it was dealt as the penultimate song but the band ended with the title track of the new album – a shivering slice of minimalism that underlined a band that was certainly not dealing in the bombast and volume of rock but creating this neo-soundtrack, pulsating, atmospheric sound where the texture was the key.

These were shape shifting atmospheres flickering away against the robotic drum machine like pulse of Lol Tolhurst’s distinctive drum patterns and the bass providing many of the melody lines and Smith’s heartbreak vocals creating spells. The title track flickered in the night sounding like a church service for the post punk dispossessed and was a brave ending for a set in time when bombast still ruled the dinosaur world of rock.

Holding the audience in their spell this far the band returned for the encores of Boys Don’t Cry and Jumping On Someone Else’s Train and Another Journey By train – ribald pieces that fitted closer to new wave templates that saw the beer flying in the pit and as close to a party as 1981 was going to allow.

The 17 Seconds tour had already seemed like a darker turn but the new Cure were immersed in the dystopian shivers of their new sound. At the time it felt like a trip even deeper into this mood than even Joy Division. The years after and the adventures into pop and the band’s enveloping into stadium hugeness have blurred the memories but in 1981 it felt like it was The Cure who were staring deepest into the abyss and returning dressed like proto Goth biker jacket droogs to report back with stunning immersive gigs like this that toyed with rock music and created new moods and magic.

Where would the band go next? It felt like each step was getting darker and heavier. At the time we had no idea that the iconic Pornography,  with its crumbling black heart dystopia psychedelia was just around the corner…a cornerstone album for a culture and a serious game changer with another accompanying tour…

In 1981 The Cure were as dark and dangerous as it got. They were the new game changers and the new standard and their albums were pushing the boundaries. The Faith tour was the frontier beyond Joy Division and the soundtrack for an age yet to come.