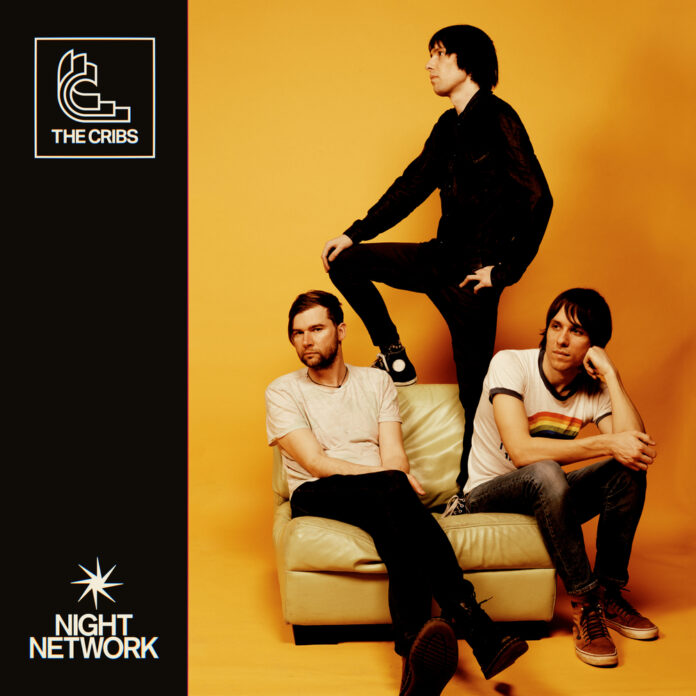 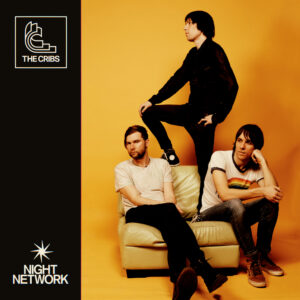 The Cribs emerge from the wilderness with their first album in 3 years, Night Network. Long-time fan and indie enthusiast Andy Brown reviews the album for Louder Than War.

For a minute there it looked like we had nearly lost Wakefield’s finest export, The Cribs, to what Gary Jarman has described as “legal morass”, trapped by a situation with their UK management that stopped them from recording new material for 18 months and very nearly broke the band. This is, of course, the brothers Jarman and they were always going to find a way back. A support slot with the Foo Fighters led to the official ‘nicest man in rock’ Dave Grohl inviting the band to utilise the Foo’s very own Studio 606. A lifeline that produced the bands eighth studio album, Night Network.

Survival and solidarity have always been The Cribs way: three brothers who formed a band over a shared love of indie, punk and old Queen records. If you’ve ever been lucky enough to see them play live then you’ll know just how much sweat, blood and torn denim they put into their music. This passion has been reciprocated by the fans too: they’re a band who have, quite rightly, inspired devotion amongst the faithful. Cribsmas 2018 was one of the most exciting gigs I’ve attended; an emotional and euphoric performance at The Brudenell Social Club. Those days will come again but for now we’ll have to settle for some new Cribs tunes.

Night Network comes a full 3 years after the raucous 24-7 Rock Star Shit, a Steve Albini ‘engineered’ effort that saw the brothers embrace their noisiest inclinations. An album that hit me square between the eyes from the very first spin. By comparison, Night Network sees the noise and rabble rousing screams dialled back a little. I’ll be honest, it took a few listens before the album started to fully click with me. Having said this, the album’s opening track was an absolute beauty from the very first play. Goodbye starts with a decidedly melancholy melody and some beautiful, almost Beach Boys-esque harmonies. It’s a lovely surprise with a distinctly Christmassy (or Cribsmassy) feel.

Running Into You comes next: a barnstorming Cribs classic-in-the-making with some suitably wild guitar work from Ryan. Screaming In Suburbia is a brilliantly big-hearted and emotive tune that finds the band looking back to look forwards: “if life’s just a sad song/ we’ve been singing it for too long”. The edges have been smoothed slightly since Albini’s time behind the desk yet the shift does allow other elements, like the brothers’ harmonies, a chance to really shine through. The driving joy of Never Thought I’d Feel Again steams in next: musically triumphant while lyrically wrestling with the past via old photographs and, “mental baggage imported straight from the West Riding”.

Deep Infatuation is catchy and solid enough but pales in comparison next to the sprawling I Don’t Know Who I Am. Easily one of my favourite songs on the album, the track features a woozy and brilliantly uneasy instrumental, a cryptic lyric and the return of friend and Sonic Youth noisemaker Lee Ronaldo on guitar. While the track doesn’t reach the same heart-wrenching and cathartic levels as the glorious Stay Safe, it’s still a welcome step into something strange and unknown. Fool enough to care, brave enough to try.

She’s My Style is a fuzzy, sweet and catchy indie-rock love song that revels in simpler musical pleasures. It’s one of those tracks that didn’t make a massive first impression but those harmonies really are hard to resist. Under The Bus Station Clock is a thoroughly gorgeous, yearning ode to faded daydreams infused with a distinctly Cribs-esque sense of melancholy: a shared history spent standing under the bus station clock in their hometown of Wakefield. I love it to pieces. The Weather Speaks Your Name is a sonically intriguing and misty-eyed shoegaze-esque slow-burner. Sure, there’s part of me that misses the throat-shredding and sonic vitriol of albums like Men’s Needs, Women’s Needs, Whatever but that was a lifetime ago. Night Network is an honest and heartfelt snapshot of the band in 2020.

Siren Sing Along will no doubt inspire a few sweaty sing-alongs when we finally get to hear it played live: “Is the song for real or just a feel good drug? Don’t overthink it/ it won’t do no good!”. An open letter to the power of a good tune and some solid advice (trust me, I’m king of the overthinkers). Earl & Duke is a blissful, understated melancholic gem floating on a lovely, Smiths-esque jangle. A subtle track that really gets under your skin after a few listens. The album comes to a close with In The Neon Night, a ragged ode to escaping the past. Ryan singing for his soul over a wonky, perversely jaunty tune: “Now I’ve got to the point when I don’t want to wake each morning”. It’s the sound of a band bidding good riddance to troubled times and trying to find a way to move on and be happy.

In a world of instant gratification, Night Network is an album that benefits from close and repeated plays. A little more restrained than I was expecting perhaps, as a whole the album actually felt a tad underwhelming the first time round. Then it clicks into place; the attention to detail, the blissful harmonies and the heart-and-soul the band have clearly put into the album. It isn’t The Cribs trying to make some kind of definitive, world conquering statement, rather a glimpse inside their collective diaries. Bruised, tired but still defiant. They’ve arrived in the midst of a particularly strange year but it’s really great to have them back. Here’s hoping that Gary, Ryan and Ross continue to make albums for a long, long time.

You can order Night Network from the band’s website here