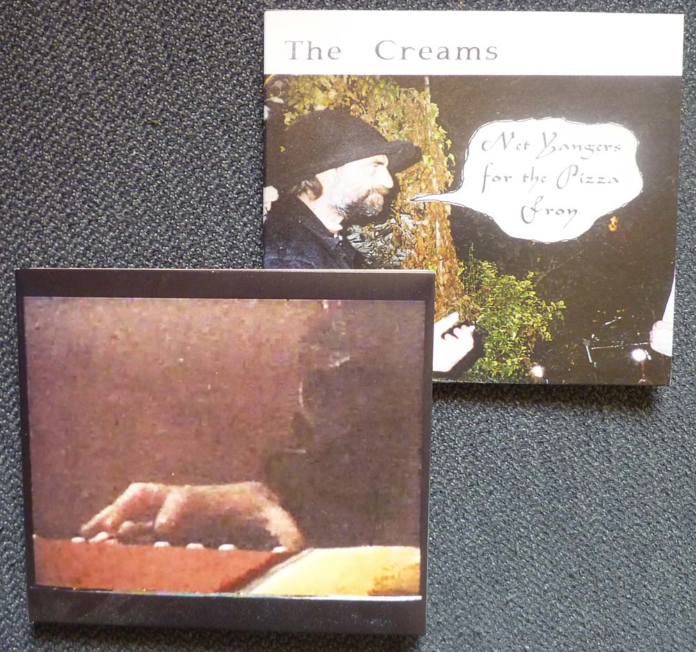 The Creams – The All Night Bookman/Net Yangers 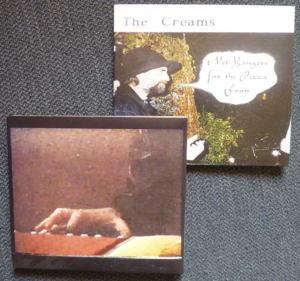 A double CD that is a reissue of the final album by the Creams, the 1990s band of Alan Jenkins, previously leader of the Deep Freeze Mice. Also available is a 22 song set taken from a live show in Hannover in 1997 entitled Net Yangers For The Pizza Froy. That all totals up 64 tracks of prime neo psychedelic weirdness that was right up Ian Canty’s alley…..

Another band featuring Alan Jenkins of the Deep Freeze Mice, the Creams developed out of Ruth’s Refrigerator (the band that is, not some kind of growth left in a cooler for a long time). Three members of that band, Alan Jenkins, Blodwyn Teabag (possibly not her real name) and Robyn Gibson and were joined by Howard Fairley to complete the Creams’ line-up heard here. They played their skewed pop sike for most of the 1990s to a small but discerning section of the musically-inclined public.

For those who missed out like myself, more fool them and me, because the Creams presented an enthralling multi-pronged attack. One that still maintained Alan’s trademark style of twisted new psychedelic storytelling, something that would be familiar to old Deep Freeze Mice fans, but also branched out into some other quite unexpected directions. They were a band whose interests seemed to include 60s pop legends the Zombies (who they cover three times), the TV series Red Dwarf (the theme song is versioned on the Net Yangers… live LP LP, see below for details) and They Might Be Giants, whose songbook they also dip into.

The All Night Bookman was their double album swansong from 1998 and disc one opens up with the sound collage/announcement of Beware, but from there on it is littered with gems. Howard Fairley’s offerings provide a neat counterpoint to Alan’s wild and wonderful song as they are cut in more straightforward 60s pop direction, but in a way that is very pleasing to my ears at least. Like the addictive jangle of Pretty Thing, which is an absolute belter, or the oddly named and Big Fat Beautiful Thighs, garnished with a reggae rhythm which even comes complete with a pretty authentic bit of toasting! The band stretch out on compositions like the soul beat and ringing keys of Little Particle and cool mood piece Stubbs Inflates A Kangaroo. All of which should give you some indication of the breadth of sound present.

Jenkins himself is in fine form too, with Four Dozen Monkeys a top effort that incorporates talk of Airfix kits amongst other things in the lyrics and some prime biting guitar. Blitzkrieg Bob is an early foray into experiment surf music, a jolly beat nugget with great energy and No Stories has a gripping new wave tension to it. It would be remiss of me not to mention the crazed and comic tribute to their drummer Robyn Gibson CBE and the Small Faces-like singalong with lovely keyboards Bag Of Moonshine too. Bringing this disc to a close is Bursting (The Bubble Of Love), which harnesses a marching beat and then veers into funk and electronic bleeps before finally climaxing with a some great wigged-out guitar. A little like Can if they came from Leicester.

Moving on to disc two the variety continues, but not at the expense of quality. This platter begins with the extraordinary (Not An) Interflora Van, opening with a freak out and then feedback marks a nervy but catchy psych song. This fades into a ersatz show tune before returning to end the piece. Outstanding. The weird pop/bracing new wave feel to Ringing The Bell On The Chocolate charms, as does Howard Fairley’s straighter pop nugget Sports Casual Is The Way. Alan intones that “some people like to keep an extra head or two” on the great Men With Two Heads, which develops nicely out of a jazzy intro and the fast and riffy Civil Disorder In Bad Rabbit has a VU-relentlessness about it, though as always the Creams don’t really sound like anyone else. Anyway it certainly is an upbeat way to end an album filled with interesting concepts, unusual insights and great melodies.

Also available as well as The All Night Bookman is Net Yangers From The Pizza Froy, a rum name for live collection of the Creams’ set taped at Silke Arp Bricht Club in Hannover, Germany on 19th September 1997. This gig was the last night of their tour and Ted Milton’s Blurt were also on the bill, indeed the run-out track is the assembled waiting for Milton’s particular brand of skronk.

The run of shows had clearly honed the Creams’ live attack to the point where they were a fast and feisty live proposition, speeding through their back catalogue to the approval of the crowd. There’s not too much crossover with The All Night Bookman material either, so if you are suitability impressed by that record, this offers you the ideal next move. With a sleeve that seems to be a photo of the Esperanto-spouting heckler that momentarily and surreally interrupts the band’s set, Net Yangers… is a good sound quality recording of a band on a mission.

The set is bookended by two atmosphere tracks, the wittily titled The People Of Hannover Talk Amongst Themselves before the Creams enter stage left and The People Of Hannover Wait For Blurt after the conclusion of their performance. In between it is all-action attack, with typically self-deprecating humour like on the breezy Mostly Crap. If their take of Walk Don’t Run again points to the ESM direction Jenkins would pursue further, the ultra-fast intro to Hello Anne Of Green Poplars is the prelude to some classic Alan Jenkins psych pop.

This live show speeds along at quite a pace and the band are too busy and sharp to ignore. The short and snappy Hell With No Sun Cream and the ringing guitar chimes of The Little Like Song impress, compact but full of fire. Echos Myron is great pop, as is their version of They Might Be Giants Nothing’s Gonna Change My Clothes, which brings the set to a thrilling end.

I’m as culpable as anyone, but I can’t understand how Alan Jenkins doesn’t get more acclaim, especially when others doing a similar thing with far less wit and invention are lauded. Am I missing something here? The Creams were another in the series of his bands that gently pushed the boundaries with very pleasing results. They were built on his core strengths of neat tunes and eye for an endearing and unusual lyrical viewpoint, but refused to be hamstrung to repeat the same set of sounds endlessly. He also had the lack of ego to allow other band members to shine as well. The All Night Bookman is a refreshing glimpse into their offbeat world and Net Yangers… ably demonstrates that they could really deliver in a live setting too. If you pop along to Cordelia Records website at the link above, you might well want to pick up both.