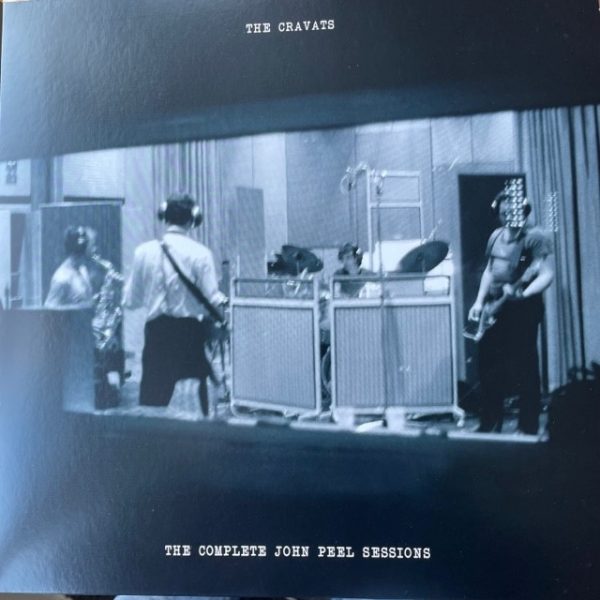 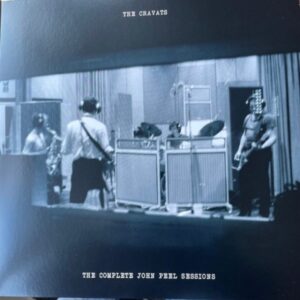 Foreign release of the Redditch marvels’ John Peel Sessions, produced on a double vinyl issue limited to 300 copies. Ian Canty snuggles up with the radio on…

Like many bands in the late 70s, The Cravats opted to put out their own record and did so in the summer of 1978. Happily, the Gordon single quickly became a “Peel Favourite” and started a long association of patronage from the DJ, the fruits of which are catalogued on this new vinyl release.

The first visit by the band to the Beeb’s Maida Vale studio was on the last day of July 1979, accompanied by Bob Sargeant in the producer’s chair with Mike Robinson engineering. At the time The Cravats line-up was Robin Dallaway on guitar and lead vocals, bass and singing from The Shend, Svor Naan on saxophone and drummer Dave Bennett, with the latter having replaced John Yapp. This version of the band remains in place for the whole of this set.

These first five tracks ensue with the very fast pace of Welcome. It’s clear at once the band are firing on all cylinders and the sound is superbly caught on this platter too. The bass is insistent, the drums clatter and the sax wails, with a breathless voice adding just the finishing touch to their unique sound. Pressure Sellers comes next and is relatively sedate, but full of reined-in might with a cool sneering vocal, which sets up a showcase for the sax to reveal Svor Naan’s talents. It’s a mad, maniacal fun fair of noise that just drew me in immediately.

Who’s In Here With Me? builds patiently into a true wonder of itchy paranoia that comes over positively hypnotising and haunting. The rhythm section is a power pack of tension and showing no let up at all, the brief breakneck thrash of Live For Now squeals with punky mayhem. Final number in this set of songs, the rumbling Precinct, was a spoiler for the next Cravats single. Small Wonder Records wisely snapped them up just after this session was broadcast. The version here is a great take and for me perhaps just a touch better than the finished 45. That The Cravats are pin-sharp and full of impact on this first set of songs is no real surprise, but they were only just getting started, as we shall soon find out.

It is a bit of a surprise really that it was a full year before their next Peel Session, recorded on 29rd July 1980 with John Sparrow replacing Sargeant behind the control panel. Still starts off this second section as a purposeful, busy buzz with some inspired guitar mangling and gets things off to a fine start together with the jazz-flecked punk pop of In Your Eyes.

You’re Driving Me, another tense, nerve-jangling ace, occupies the third track here like Who’s In Here With Me? on the first session. This helps to give the two groups of songs a sense of consistency, as the band tightened up the formula to a frightening intensity. Triplex Zone ends the 1980 part of this collection with a measure of one of The Cravats’ more conventional, but completely enjoyable punk freak outs and departs appropriately with a detonation of sound.

The third session from August 1981 saw Tony Wilson in the overseeing role, which was turning into the John Peel radio show equivalent of being Spinal Tap’s drummer. As its final offering we were given a preview of the Rub Me Out single before its Crass Records’ makeover. It’s really good to hear this scaled down version. Don’t get me wrong, I love the single take, but this feels like something totally Cravats and a brooding masterstroke to boot.

The fullness of sound in the opener Terminus gives one a good appraisal of The Cravats’ musical strengths, where a soaring vocal line and an awe-inspiringly tight rhythm are allied those prime guitar and sax blasts. On top of that, you also get an intriguing sense of mystery plus typical Cravats’ warped humour and worldview. No-one else was offering quite the same thing and they were attributes to cherish.

Ice-Cubists is another bite-sized example of their craft, with a thudding drum pattern beating the path. The slithering, near-static sections of Fireman contrasts sharply to the very bright, near-pop chorus/crescendo. One of the good things about these sessions is how well the sound captures The Cravats’ work and how delightfully different they were from everything else, even in the “anything goes” post punk years.

The final suite of songs comes from a session 6th November 1982 when Dale Griffin took up the production job. This was in the run up to 1983’s The Colossal Tunes Out and much like the previous session, all four songs were later included on the band’s second LP. A spidery guitar starts off There Is No International Rescue, almost surf punk really, before the sax forms it into some kind of deranged, ultra-fast jazz dance that would have yanked the goatee beards clean off the faces of Blue Rondo A La Turk.

This is breath-taking and if The Station appears more in the line of The Cravats’ previous adventures, it adds a pleasing touch of murky menace. The scratchy, Beefheart rumble of Daddy’s Shoes is one neat earful and finishing up the set we have a lively Working Down Underground. That’s the funny thing about this band, they are so damn catchy in their oddness. The overall effect is one that is beguiling and totally addictive. After playing this collection I was left this wanting more. Thankfully The Cravats are still around and in super-hot form, for example on their recent and great albums Dustbin Of Sound and Hoorahland (reviewed here and here)

This two vinyl LP set sounds absolutely spot on throughout and presents a band at the height of their (early) powers. That the BBC productions for John Peel are a valuable punk/post punk archive has been proved beyond doubt time and again. The various producers and faithful engineer Mike Robinson must have worked hard to capture The Cravats’ power, dark humour and thoroughly ingenious aural havoc so well. The band take the opportunity that this the clarity offers by to shoot for the stars. It’s wonderful and Cravats’ watchers are going to want a piece of this tasty musical biscuit.