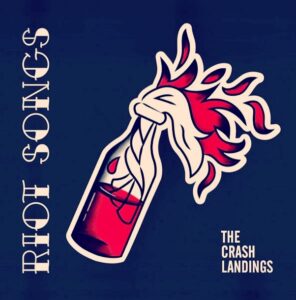 Six whole years since the debut, All Guts and No Glory album and South Coast Punk Rock band are back, minus a frontman but with the same explosive sound and three of them taking turns on vocals.

The Crash Landings have a classic sound.

Traditional. Punk Rock but with serious skill and with a Heavy Rock precision and clean-cut but loud, chunky sound.  Solid, heavy drumming. Anchored, pummelling bass.  Throaty and raw but properly sung vocal.  It is the lead-guitar that is the meat and muscle. The playing and guitar sound is magnificent – almost verging on Heavy Metal at times, but pulled-back from the brink every time! Think Pistols Steve Jones and his Chuck-Berryisms. The choppy, powerful sound of Paul Fox from the Ruts. The blitzkrieg attack of Fast Eddie… yep, this is an album for lovers of electric guitar – and solid street-punk anthems.

Bassist Seb told me about the title track.

‘Riot Song’ is about the Poll Tax riot. My mate Zac was the ‘skinny punk rocker (who) threw a traffic cone’.  He was on TV and the police hounded him until they got him banged up for 6 months!

The best title is for the instrumental, Duke of New York, my daughter suggested it. Everyone from the Ramones to the Bunnymen has a Clockwork Orange reference, this is ours.

There is not a weak track on Riot Songs. It’s ten short, sweet blasts of prime punk-pop in steel toe-caps.  Gold is one of my favourites though – a song about mates no-longer-with-us.  The boogie-rock flavoured Sister is another cracker.  Some subtle organ and a heavy-heavy ska vibe on What Goes ‘Round is a nice bit of variation.

The only song I’m not personally that fond of is Halloween where the out of favour female in the lyric is addressed as ‘woman’. It’s also got that distinctly Dropkick Murphys thing going on musically.

TCL really do have an across the board appeal punkwise; Streetpunks & Oi! herberts will like The Cock Sparrer style chorus.  Old-boy retro-punks will love the Ruts and UK Subs influences.  Fans of American Epitaph/Lookout/Hellcat bands will appreciate the style & energy.

Pop-punk kids, metalheads, garage-rockers and just plain lovers of noisy guitars and good tunes should take The Crash Landings to their hearts. I don’t think it’s an exaggeration to say that Riot Songs really is one of the best traditional punk (I hate the expression ‘old-school’) albums you are likely to hear this year.

Stick the CD on the car stereo on the drive up to Rebellion and then tell me I’m wrong.

Recorded at Blueline in Bournemouth. Recorded & mixed by Antony Woodhams