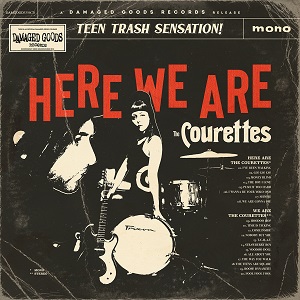 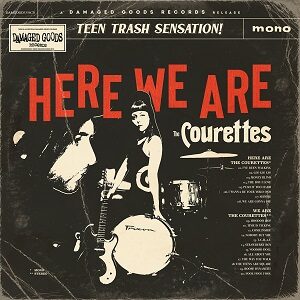 Three years ago we told you that The Courettes would be your new favourite band. If you haven’t heard them yet, now is the time as Damaged Goods reissue their first two albums, handily on one CD (as well as individual LPs) for a quick and easy fix of fuzz-crunched garage rock doused in soulful 60’s girl-group melodies. Imagine The Detroit Cobras covering The Sonics with the Ronettes guiding proceedings and you’re pretty much there.

From the off, they blast in. Songs like The Boy I Love push fuzz to the max. It’s a savage introduction to the Brazilian/Danish wife/husband duo. Flavia Couri’s voice hits great peaks over a fantastic crunching Troggs-like guitar sound that flits into subtle soft licks before kicking free and wild. It’s a total Riot grrrl from the garage blast that they continue on through Here Are The Courettes, stomping and grooving all the way. The influence of that 60’s American garage sound and the Medway stylings of the likes of Billy Childish are on show, rough and unpolished, beaten and battered. And when she wails, like on the great I Wanna Be Your Yoko Ono, boy does she let loose. Behind the chaos, Martin Couri keeps it all in check with his spitfire drumming, tight to the rhythm and the perfect foil to create a wonderful racket that calls to mind the very best of Jon Spencer. Flavia plays some wonderful garage-blues on Push It Too Hard, the duo pulling on the typical drum break jolts, while producer Kim Kix (Powersolo) provides a warbled vocal that brings a real shade of The Cramps to their sound. We’re Gonna Die pummels that fuzzed-to-the-floor sound, full of savage urgency, closing out the record in style.

After that eight-track debut leaves you salivating for more, there are a whole twelve morsels to devour on the following We Are The Courettes. Hoodoo Hop opens the album and it’s clearly a step even further to the wild side from their debut. Still stripped back retro garage, but this time the sweeter vocals that brushed Here Are… were seemingly pushed to one side in favour of a blender-fed 5,6,7,8’s, definitely the bastard younger sibling of an already wild child. That said, songs like Strawberry Boy still allow the space for the calmer delivery, which, while more soothing, leaves you waiting nervously for the next explosion. There’s not long to wait at all as Voodoo Doll flies in full of trash-garage horror, helped naturally by the appearance of Brazilain horror legend Coffin Joe adding some guest vocals. The album produced some top singles, such as the twanging Time Is Ticking and the primal energy of Boom! Dynamite! which, to go for the easy pun, is a blast. They close out the album with the caressing Fool Fool Fool, a gentle drift after the pace and energy of the rest of the record.

The Courettes are back and Damaged Goods have recently put out a couple of great new singles, but for anyone looking to really delve into their music, there’s no better place to start than Here We Are The Courettes.