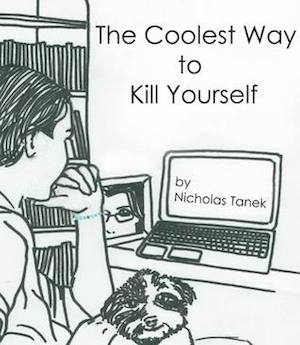 The Coolest Way to Kill Yourself by Nicholas Tanek

The Coolest Way to Kill Yourself is an unconventional romance. In short, the book, written by ghost writer Nicholas Tanek, tells the story of “a woman who thought no one would ever write something for her.” For Louder Than War, Wendy Buck reviews.

My appreciation of this book began when the hand-drawn cover popped up in my “recommended selections” on a certain website.  It really struck me that someone would publish a book with what seemed like a basic cover.  After reading the book, I reached out to the author to get the real story.  That is when I truly connected with it.

Some people remember things like what they were wearing when they think back on a certain event. Nicholas Tanek will tell you what song was playing. When he was thirteen, he met a girl in a record store who introduced him to the punk scene… amongst other things. At fifteen, a friend took him to his first rave, and that is where The Coolest Way begins.

For people who do not truly appreciate the power of music in our lives, the sheer number of music references in this book will be lost on them.  For the rest of us, the first song reference appears three paragraphs into the 460-page memoir: The Orb’s 20-minute long “A Huge Ever Growing and Pulsating Brain that Rules from the Center of the Ultraworld.” Before the end of the first page, he also mentions the names of several other bands, including My Bloody Valentine, Happy Mondays, Sonic Youth, The Stone Roses, and The Jesus & Mary Chain.

As I perused the playlist at the back of the book, I realized how carefully Nicholas had chosen each and every song so that it expressed the right words and emotions to go along with each part of the story.  I was transported back to my own days of mix-tape creations.  I was transported to many places, to be honest, while reading this book – some old and some very new to me.  It is an experience, to say the least, to enter into the world of Nicholas and Lynn.   This novel is not just several hundred pages of band names and song titles.

Although it is labeled as fiction for legal reasons, the book is a memoir and a tribute to the love of one man’s life.  Everything in it actually happened.  It explores, in depth, subcultures that existed in the underbelly of the tri-state area during the 1980’s and 1990’s.  It is told in a beautifully, brutally honest way, and if this world of commonplace drug use and kinky sex is new to you, strap in and put your helmet on because it is a wild ride.

You see, this book was written and published with next to no budget. The simplistic hand drawn cover, with only a hint of color, has a special meaning to the story, and was not designed with advertising in mind. The editing was all done for free, and all promotion you may see floating around has been done by a small group of volunteers who truly believe in this author and his book.  The title is a metaphor; this is not a how-to manual. The book was not written to be sold, but was written for love. At its core, this story is about second chances. It’s a story about giving in to love and finding the strength to heal.

The book can be purchased via Amazon or Outskirts Press Publishing.

More info about The Coolest Way to Kill Yourself by Nicholas Tanek can be found online here: thecoolestway.com.

Nicholas Tanek is on Facebook and twitter (@NicholasTanek). The Coolest Way to Kill Yourself, meanwhile, also has a Facebook page. Finally, check out the author’s page on Good Reads.

All words by Wendy Buck. With thanks to Melissa Blair for her invaluable help.