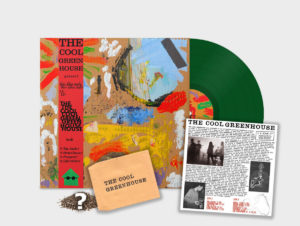 “You see the purpose of this band is to offer a glasses cleaning service at a very reasonable price”. With their eloquent debut album, The Cool Greenhouse are setting the agenda clearly.

Having initially emerged as a brainchild of a spoken word artist Tom Greenhouse, the solo lo-fi project has now been transformed into a band presenting their first full-length studio work. Those familiar with previous single releases might expect the LP to be as charmingly odd and hilariously confessional as its predecessors. This time the recording process was conducted by Phil Booth, whose prior collaboration with The Wave Pictures seems to have defined the approach to this album. The recurrent melodica line on the closer The Subletters Pl. 2 fills it with similar countryside reminiscence.

Apart from remaining poker face sarcasm, the overall music structure became more solid. There is no click track anymore but real drums instead. Although most songs skid on two chords, sonically they evoke various associations bridging music concreté and art-punk, e.g. Swell Maps and Talking Heads. On the opening The Sticks, the jangling texture is gradually intensified with nagging keyboards and slightly dystopian lyrics somewhat resonating with current newspaper headlines. “Today the birds are flying unusually low to the ground / And the insects are flying unusually close to the clouds / There’s all sorts of inversions that you need to get your head around”.

It’s not all black and white though. There is a fine line between irony and earnestness, so the mood of wordy monologues varies as much as a discourse of diary entry and stand-up comedy show.

With constant repetitions and lyrics sounding like teasing rhymes, The Cool Greenhouse intend to be an irritant aiming at global and lesser targets. They are self-ironic too. On Dirty Glasses, Tom introspectively gives a brief summary of the like-minded audience: “We represent a different platform of dispossessed pinko middle-classes who have very dirty glasses”.