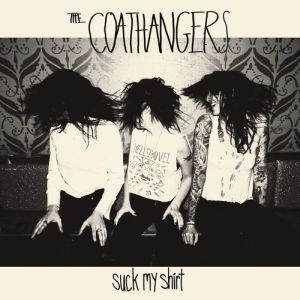 The fourth album from ATL’s smart punk sisterhood The Coathangers gets a European release to coincide with their upcoming overseas tour.

Although Suck My Shirt has been available in the US since March, the UK and Europe will finally get to join in on salvaging some spilled tequila with The Coathangers, a band that has fine-tuned their technique but lost none of their fun, rambunctious magnetism.

The fact that The Coathangers are all girls is something a lot of people can’t seem to stop talking about. Personally, I can’t wait for the day when all female or female fronted acts are no longer analyzed as a separate phenomenon from their male counterparts, when reviews stop becoming lengthy feminist theory pieces with the band’s actual music largely ignored, but it’s a long way off yet. Unfortunately, the same discussion is going to keep occurring when an all female band is still often seen as a novelty. The Coathangers rise above this burden nevertheless, and continue to defy men’s (and the industry’s) expectations of marketable women in music by having their own identity and not worrying about what anyone else thinks.

Since the departure of keyboardist Candice Jones, The Coathangers are now a trio with Julia Kugel (Crook Kid Coathanger) on guitar, Stephanie Luke (Rusty Coathanger) on drums and Meredith Franco (Minnie Coathanger) on bass, although all three ladies share vocal duties and often switch things up by alternating instruments. If anything has really changed with Suck My Shirt, it’s the band’s ‘fake it ‘til you make it’ approach noticeably paying off; their songs are more confident and better developed, while the lack of keyboards gives them a tougher, leaner and less diluted sound.

The Coathangers have always embraced the natural duality of their vibrant personalities through their music, so the results on the ear are both sweet and sour, spiky yet pretty. From their abortion referencing band name to their Myra Hindley design t-shirts, it’s clear their spirits align with the confrontational crassness of punk, but their hearts are much bigger than that. There is a wonderfully contagious feeling of sisterly camaraderie as they slap eachother’s butts onstage, and one of their most devoted fans is an 8 year old girl whose dad regularly brings her to the all-ages shows where she is always encouraged to join them for a Don’t Touch My Shit! duet. With their matching denim, elaborate tattoos and the raucous irreverence of some of their song themes, The Coathangers seem like the ultimate bad asses, but also unlikely role models and positive motivators with the potential for forming strong, enduring friendships.

Follow Me opens Suck My Shirt with a self-assured swagger of razor-like palm muted guitar riffs and a cool, rippling bassline dominated by Stephanie Luke’s powerful, smoky rasp. Shut Up continues in the same demonstrative and bossy vein, a solid denunciation of selfish bullshitters in relationships that feels like a refreshing fumigant rather than an embittered backbiting. It is less shrill, playful and bratty than Shut the Fuck Up from their self-titled 2007 debut; perhaps this time there is little to be amused about because it’s nearly 8 years later and these guys are still whining… Much of Suck My Shirt plays out like a determined shedding of dead weight/human baggage; a brave and stouthearted ‘fuck you’ to all the fakers and parasites intent on dragging everyone else down.

Springfield Cannonball is a nervy groove full of scratchy power chords, manic drum thumps and anxious vocals. Its wiry high string bend in the chorus harkens back to some of the more esoteric post-punk girl groups like Erase Errata, The Mo-dettes, and Snatch. Lyrically it is somewhat of a karmic cautionary tale of the inevitable loneliness awaiting those with toxic personalities who continually make bad decisions (“only regrets to keep you warm”).

The yipping, bouncy Merry Go Round (reworked from the version that appeared on 2012’s split 7” with Heavy Cream) is surely one of the catchiest album cuts, and while the band has no designated leader, Stephanie Luke’s beguiling growl is wisely at the fore on a number of standout tracks; the boozy and bluesy Love Em and Leave Em, their ode to the psychoactive stimulant Adderall, and the visceral anguish of Derek’s Song, an elegy for late Seattle musician and friend Derek Shepherd.

In place of the hysterical juvenilia and idiosyncratic shrieking imprinted on earlier songs like Parcheezi or Pussywillow, the ire of The Coathangers is more measured on Suck My Shirt, and their targets are struck with finer accuracy. There is also plenty of variation, like the sullen and atmospheric Zombie, which in itself flips from an eerie slow burner to a mini symphony of slashing guitar squeals. Meredith’s moody, vibrating bass and Julia’s honeyed, downtrodden vocals are complimented perfectly by the call and response echo of Stephanie’s untamed, abrasive howl, and is an excellent example of how trading off and sharing responsibilities within the band works so well for The Coathangers. My runaway favorite, however, is the restless unrequited longing of album closer Drive, a song bursting with so much bittersweet poignancy that it is almost painful to listen to.

The album title Suck My Shirt works both as a sassy kiss off and a reminder that everything will be okay; even a spilled tequila casualty does not have to mean the end of the world. I just hope Suck My Shirt will help me and others find the wisdom, the grit and the guts to hang onto our own sense of self-belief and scrub out the negative influences in our lives, or at least write some stomping good songs about it.

The Coathangers are hitting the road in October as part of the Burger Records Caravan of Stars tour in North America before heading to Europe in November. All dates listed below.