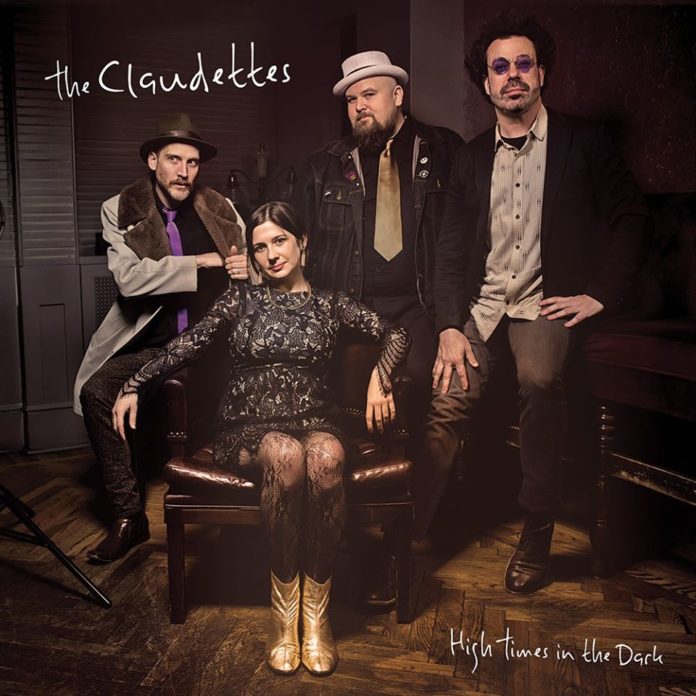 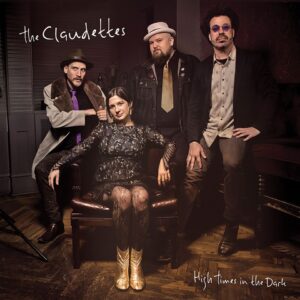 The Claudettes: High Times in the Dark

Hailing from Chicago, The Claudettes return with a follow up to their highly acclaimed album Dance Scandal at the Gymnasium. Like its predecessor, the album is packed with spirited rootsy New Orleans influenced jazz blues piano led rock n roll. The result? 11 prime fresh cuts of glorious attitude packed musicianship with vocals delivered by an angel, lyrics emotionally charged and often humorous. Most of all though all eminently listenable that will have you reaching for the repeat button.

The main theme of the lyrics throughout is relationships. Bad Babe, Losing Touch kicks off the album with Johnny Iguana’s punchy piano leading the charge on a song about a relationship turning sour and the couple losing their closeness. This is followed by 24/5 which tells the opposite story. “There’s such a thing as gilding the lily” sings Berit as she tries to put some space between her and her lover. Berit’s voice is somehow simultaneously formidable and serene & heavenly. Her voice matches the commanding musicianship on the track Iguana’s fearsomely impressive piano playing. This is complemented by the return of the sophisticated Michael Caskey on drums and tasty guitar licks from Zach Verdoorn.

I Swear to God, I Will has laid-back hypnotic dreamlike quality to it, matching the lyrical theme. Then Creeper Weed doesn’t so much creep up but smack you in the face. The song bringing a vibrant almost ominous energy to proceedings, the energy and vibrancy building to a climatic crescendo.

The blues infused, Grandkids, Wave Bye Bye, is a criticism of the “I’m alright jack” attitude of society. Without a doubt, the lyrics of this one are appropriate in these times where the selfish have stripped the shelves of essential items – I’ve got mine, sod everyone else. Full of lush instrumental breaks, including a piano part that is vaguely reminiscent of The Smiths’ Oscillate Wildly, One Special Bottle sees the protagonist waver about opening “that” bottle.

“On behalf of womankind, you’re declined”. Declined is a potent #MeToo influenced track. Berit sending a message to an unwanted persistent suitor, clever lyrics delivered in business style letter responses. Zach joins Berit on the wistfully lamenting I Don’t Do That Stuff Anymore. The song both a confirmation of putting old bad habits behind them, but also an almost sorrowful celebration of the love of life that went along with those times. I could hear Paul Heaton and Jacqueline Abbott singing this one.

Funky guitar riffs accompany the sarcastic humour on Most Accidents Happen, a critique on the fear mongering by the incessant 24-hour news channels that only help create hyperbole and hysteria. The penultimate track this song comes with a health warning. Don’t date a drummer… Like The Waterboys Fisherman’s Blues, You Drummers Keep Breaking My Heart is a list of lovers’ past and how each one breaks her heart…sumptuous piano, beautiful mid-song break, cymbals crashing in the outro. Superb.

The metaphor filled closing track The Sun Will Fool You is achingly beautiful in is melancholic delivery. Absolutely tears to a glass eye stuff. A reminder that people aren’t always what they seem, the public façade completely different from that which goes on behind closed doors.

Taking my lead from the lyrics of 24/5, there is no need to gild the lily, how can you improve on what is already a thing of great beauty?

Unfortunately, The Claudettes, like every other touring band, have fallen foul of the consequences of the COVID 19 crisis, with planned live gigs in the UK cancelled. I look forward to when they do eventually bring their music to the live arena in the UK, those will be dates to savour. In the meantime, enjoy High Times in the Dark.