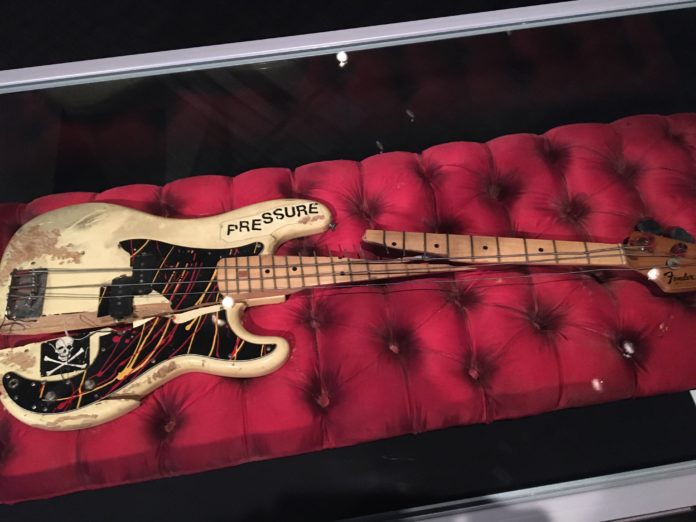 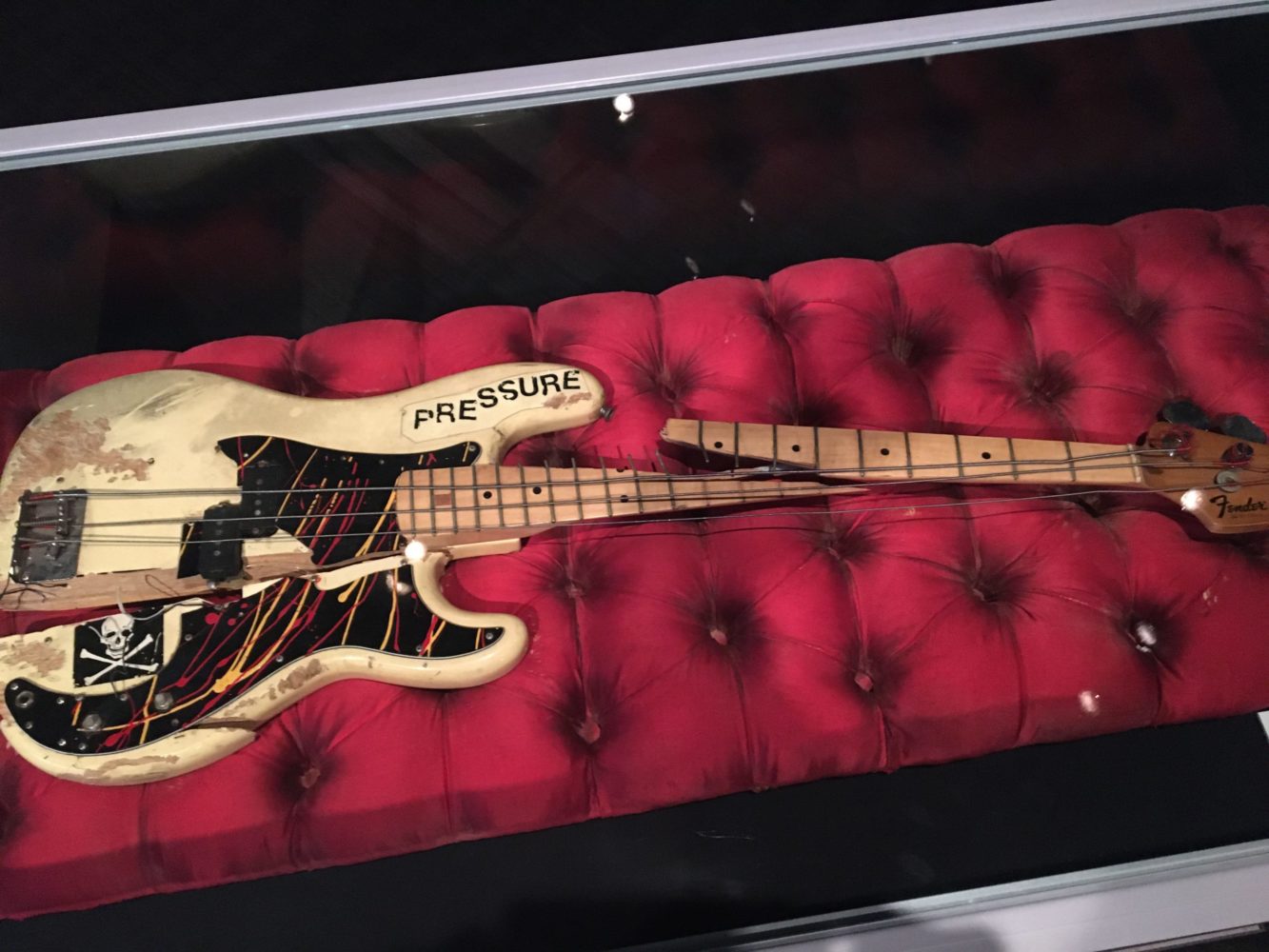 London is calling alright but is a Clash consensus and the reverie that surrounds their third album forty years on deserved? Steve John gets his souvenir bum flap stuck on the fence.

Good intentions have however gone straight to hell with my fragile head reverberating with Total Control Racing from the previous night’s Sleaford Mods gig, and the line ‘Go and listen to some fucking garage punk you pointy little tit’, seeming disturbingly prescient. Complimenting this was enough time sat on the tube to get in the mood and consider the wisdom of trooping around the London Museum for the first Saturday of one of those anniversaries, that in the hands of art and culture bigwigs is a scene in danger of eating itself. Thankfully though this isn’t the seventeenth anniversary of a middling indie record but in the case of this exhibition, the bits and pieces which surrounded the making of something which has for better or worse gone on to be hugely influential.

Nevertheless, it’s difficult not to hope that this canonisation of The Clash might have jarred with Joe Strummer on some level. If the last high profile equivalent of this exhibition had led The Clash touring mate Viv Albertine to amend the signage at the British Library, then this could have done with the spirit of Ari Up running around with her Union Jack pants on her head. In dereliction of my DIY duty, I did neither and limited my dissent to sighing at people spoiling my photograph by loitering over the usual sycophantic tributes. There certainly wasn’t a united front at the time, as while ‘The Only Band That Matters’ legend arose around the time of London Calling, that could be because the likes of Crass and Sniffin’ Glue’s Mark Perry accused them of murdering punk.

Claims that London Calling was the first time a band from the era had experimented with different sounds, countered with it being more the welding together of existing musical styles which had a lineage to make the music establishment feel at home. One of the most revealing cases in the display features band tour DJ Barry ‘Scratchy’ Myers records, from the reggae of Dillinger that they came on stage to and a copy of The Cramps first album which did at least as much to give rock & roll the kick up the arse it needed as The Clash. With Brand New Cadillac the reference points were particularly easy with it being great rockabilly because Vince Taylor’s 1959 B-side had been great rockabilly. So were The Clash, who by creating a soundtrack that wouldn’t scare the horses, a comfy type of rebellion and the one thing punk should never be: respectable enough for Radio 2 and Rolling Stone magazine to declare London Calling the best album of the 1980s.

Punk as a musical year zero with about three bands it was acceptable to name drop was always a pose but if the reaction The Clash sometimes provoke can be po-faced then it is a reflection of how seriously they took themselves. Star of today’s show is the broken Fender Bass of Paul Simonon which with its prophetic PRESSURE sticker does produce a frisson of excitement in a way that in all honesty Topper Headon’s drumsticks don’t. The well-worn tale of Simonon’s frustration at an all-seater gig at the Palladium in New York being the result of its capture by the iconic Pennie Smith picture that adorns the London Calling cover. Ray Lowry’s insistence that ‘God made me do it’ is there to explain the decision to frame it with the lettering from Elvis’ debut album, but it is perhaps another acknowledgement that a band who declared ‘No Elvis, Beatles or Rolling Stones’ were repositioning themselves. The display’s mock-up poster of Elvis holding the album is an arresting one but convincing Smith to use an out of focus picture, shot whilst retreating from Simonon as he demolished the guitar, a masterstroke that best articulates all the beautiful contradictions and frustrations of the band. In some ways clichéd rock behaviour, it is an image which is more than salvaged by a release of energy encapsulated in the wire-like frame of Simonon that makes the record look like it has just been plugged into the mains.

Less so the bored teenager who appears to have come with his Dad and whose slouch against Smith’s other photographs may currently make him most punk in the museum. Particularly when I realised they appear to have been taken, complete with a quote from the back, of the admittedly splendid Before & After photo book. These shots still rising head and shoulders above a copy of the overseas journal of the BBC, variants of single sleeves and slightly random newspaper clippings which have presumably been designed to give a feeling of the time but feels like padding. Evidently it’s a high bar but if the purpose of a good museum is to inspire then one of the contributions the exhibition could make is to challenge the hegemony of pristine, production line images that convey nothing of the moment or spirit of the occasion.

For every band misstep, the exhibition highlights Road Manager Johnny Green being told to let people in for free or the ‘Two for a Fiver’ poster that despite the dodgy deal with CBS meant this double album would sell for the price of a single one. Unfortunately, if you slip the record from the ‘deluxe reissue of the album featuring a special sleeve highlighting the layers of the album artwork’, then first up is a title track whose sheer ubiquitousness skews critical appraisal. If familiarity doesn’t quite breed contempt, then becoming the soundtrack to the trailer for every sporting event that happens in London, or being used in adverts for the likes of Jaguar, dilutes any sage-like claims for lyrics concerned with flooding and nuclear power which are shown to be referencing the Three Mile Island accident in Pennsylvania. In this setting, Joe Strummer’s notebook is particularly interesting in the sense that lyrics which made their way into London Calling are present in a song which had it been called Ice Man would have probably meant we wouldn’t have been here to stand and look at it. Musically as it plays now it also seems less swing than plod and is light years away from the assault of similar time frame releases by the likes of Black Flag and the Dead Kennedys.

After this album tracklisting stuff highlights, for anybody who has forgotten, the run of songs which form the pinnacle of The Clash’s output. Rudie Can’t Fail comes in praise of rude boys and gets the internationalist ball rolling in a style that just about makes all the old boy Rancid clones and extras from Goodnight Sweetheart that continue to follow worthwhile. The widescreen Spanish Bombs whistle-stop juxtaposition of civil war, separatism and tourists another testament to Strummer’s way with words. Evocative songwriting with a purpose that stopped before the descent into the sixth form revolutionary chic and army fatigues which characterised much of the band’s subsequent releases. At the time of London Calling the sartorial style being described by Jones as all being part of the experimentation was again rooted in the past, and either gave them a look which made them the best-looking band around or a rod for a particular punk purist to beat them with. That it forms part of the hair on the back of my neck action that accompanied a Clash turn and walk to the microphones start to a song, putting me in the shallow end. For some reason a leather jacket which Simonon got from the set of The Fabulous Stains movie where he was in a band with Ray Winstone prompting curiosity. The clothes may be threadbare but this is ironically an exhibition which takes off when the artifice makes for artefacts which have a romance that transports you out of the restrictions of time and place in a way that most great music does.

Clampdown features the sound and urgency which seems largely attributable to having the sort of possessed producer who kept an edge on proceedings by throwing chairs or swinging a ladder over the heads of the band while recording. Lines like ‘It’s the best years of your life they want to steal’ and the ‘Work, work, work, Who’s barmy now?’ coda hitting hard as a spine-tingling inspiration for more than bullshit jobs. Good fortune helped Guy Stevens with the sort of sound that was a long way from the mid-Atlantic sheen of Sandy Pearlman’s job on Give ‘Em Enough Rope, when a CBS executive visited the studio in Highbury for Simonon to direct the words from Guns of Brixton at. A section on Stevens in the Museum being one of the most rewarding because of its focus on a less well-known story and an undesirable reputation which made him want to prove a point by making a record that sounded like scoring at Wembley. This resulting in the sort of giant-killing euphoria which really did resonate with the faraway towns while giving a mainstream voice to the people of a capital, who to this day are the still-beating heart of places a million miles away from a ‘liberal elite’ that the right has somehow managed to embroil in a real Project Fear.

Another song which chimes with relevance and involved an element of getting in character is Lost in the Supermarket with vocalist Jones inner-city London experience being contrasted against Strummer channelling his inner vicar’s daughter upbringing with ‘a hedge back home in the suburbs’ recollection. Everything coming together for the sort of lush pop sound which thankfully stops short of the saccharine ending of an album which does trail off slightly from its high standards towards the end. Train in Vain missing Jones’ tracklisting because of logistical problems rather than it being a precursor to the godawful Should I Stay or Should I Go that marked the nadir of a line-up that with hindsight, thankfully imploded before they actually became the Rolling Stones.

All things considered, then diverting enough for slightly less time than the album lasts and a decent enough archiving of one of the bands that mattered, but something that still has a lingering whiff of what the younger versions of the people involved in these events would have made of them. For example, following on from the ‘deluxe reissue’ ten minutes earlier is a ‘London Calling Scrapbook’ with the album on CD which unless you’re twelve or been handcuffed to a radiator in the Middle East for forty years, seems like nostalgia overkill. Part of a business which sees a five quid ‘fanzine’ for sale on the way out that might just have finished a youthful Perry off and would be better advised to give something new a chance before London Calling: The Musical. The fact this show is free should, regardless, please a wise man who once said, and almost certainly didn’t expect it to be used for selling shirts in Camden, that ‘The future is unwritten’.