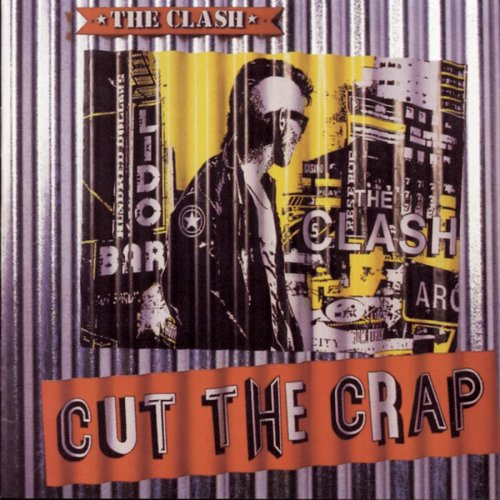 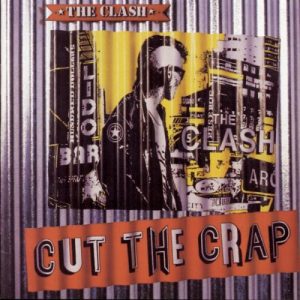 In the grand scheme of things if you were to ask most Clash fanatics about the Clash and where the best place to start for someone who is not familiar with their body of work they would reel of the album and song titles no doubt eulogising at length and rightly so about ‘London Calling’ and ‘Combat Rock’ and describing the adrenaline rush of their debut album ‘The Clash’.

Few would mention the final studio album of the Clash, 1985’s ‘Cut the Crap’.

In terms of the history of the Clash it has seemingly been airbrushed out not making it into any official documentary of the band and only “This is England” making any showing in any Clash compilations. But the band behind this album the fabled Clash MkII were together for some 2 years and surely deserve some kind of mention, enough time has now surely passed since its release to listen to it with fresh ears and pose the question was it really cutting edge or just plain Crap? Ã‚Â

By 1985 The Clash had undergone personnel changes that changed the whole DNA of the band, gone was Mick Jones ever present since the bands inception in 1976 – key songwriter, guitarist and vocalist! Gone was Topper Headon – distinctive drummer and with ‘Rock the Casbah’ a dark horse who had learnt a thing or two about song writing over the years. Original drummer Terry Chimes had gone, returned on Toppers departure but he now had also departed. Gone and now back in the fold was one time manager Bernie Rhodes but he never had anything to do with the music of the Clash so his presence behind the scenes surely could not impact on the band and its output! Ã‚Â

Of the Clash Joe Strummer and Paul Simonon remained, Joe responsible for so many great Clash songs with his distinctive honest vocals and guitar playing and Paul Simonon whose bass playing had vastly improved over the years and with ‘Guns of Brixton’ had demonstrated the catchiest of bass lines mixing it with thought provoking lyrics and his distinctive vocals! Surely with these two at the fore they could produce an album with a difference. From the last live outings with Mick Jones in 1983 they retained drummer Pete Howard perhaps not as technically gifted as Topper but certainly capable of complimenting the talents of Strummer and Simonon. Additional guitarists Nick Sheppard and Vince White were drafted in to fill the void left by Mick Jones the Clash became a 5 piece band again as they had been in the beginning when Keith Levene was in their ranks. The Clash MkII had the overall appearance of a young brash band, as a band they honed their skills playing numerous gigs, around 20 new songs were introduced on these live outings including ‘Dictator’ ‘Dirty Punk’ and the remainder of Cut the Crap these songs were good at demonstrating that the Clash MkII were a tight band – all that was required was to deliver the goods courtesy of the recording studio; step forward that world beater of a producer (that the reputation of the Clash deserved) step forward Bernard Rhodes co-songwriter and producer for Cut the Crap! After all if McClaren had re-invented himself as a song writer with Bow Wow Wow and an artist with Duck Rock why couldn’t Bernie Rhodes. That Simonon was not utilised as a proven songwriter was a trick that Strummer clearly missed if he had used him it would have presented more of a group front and as with their two most compelling albums London Calling and Combat Rock the presence of a Simonon song and vocal drove those albums to new heights.Ã‚Â  Ã‚Â

The albums opening song ‘Dictator’ is a good song as can be testified by its many airings at numerous Clash gigs when it was played straight! On Cut the Crap a good song becomes mediocre, the production does it no favours, the backing vocals are anonymous it could be any group of lads from the local pub or the football terraces, weak drum machine backing, pointless horn interludes but what really sounds the death knell for ‘Dictator’ is the constant annoying radio in the background needlessly distracting from what in essence is the framework to a very good song. ‘Dirty Punk’ gives hope that the album has potential as it is one of the songs that works best on Cut the Crap, a return to beginnings for the Clash a guitar driven song that sweeps you along with it. ‘We are the Clash’ a not so subtle message to Jones and Headon again is a song that draws you in, a good song that works well even with the not so enthusiastic backing vocals highlighting the need for Mick Jones distinctive and emotive backing vocals to take the song to the next level. ‘Are you Red…Y’ again a song that promised so much and delivered so much played live as “Are you ready for War” gets the premier Rhodes production and ends up a cluttered mess of a song, lame drum machines, pointless keyboards taking the sound away from a guitar led band who could play and of course the backing from the ever present enthusiastic male choir ‘Cool Under Heat’ and “‘overs and Shakers’ both have great guitar riffs and great opening vocals as the song builds to the first chorus and the intensity builds your brought crashing down to Earth with an inaudible shouted mass of poor vocals so much promised, yet again what are potentially great songs end in disarray. Then when all hope seems lost the standout song of the album arrives like an oasis in the desert ‘This is England!’ A classic Clash song that works well and takes the album to a completely different level.

That ‘This is England’ works is a shock in itself. The song opens with samples, drum machines, keyboards and a classic guitar hook and the ever present backing vocals but it is slower than most of the other songs giving it more time to breathe and Strummer is on form with his vocals and lyrics. The track works from start to finish a great intro, verse and for once a chorus that delivers and one that you have to sing along with, the best song by far on the album and the song released as a single prior to the albums arrival, if people bought the album in the belief that there would be numerous tracks that reach the heights of ‘This is England’ on it they would be let down. It did show that the Clash MkII were good and had potential that it remained untapped is the real crime.Ã‚Â Ã‚Â  Ã‚Â
‘Three Card Trick’ another good song played well live for so long, it was always going to be hard to follow on the heels of ‘This is England’ thankfully the track doesn’t stray too far from how the band played it live, again Strummer is in fine form and seems to be enjoying himself one of the few songs on Cut the Crap that keeps its head above water. ‘Play to Win’ the introduction perhaps has shades of ‘Ivan meets G.I. Joe’, but with the later there was more of a song to be had, here there is slight potential in the chorus even with the shouted vocals but ultimately Play to Win? On this evidence they were always going to lose. ‘Fingerpoppin’ a song played live prior to its arrival on Cut the Crap it remains an average song that doesn’t draw too much attention to itself, there were better new songs to be had that the Clash MkII played live that were overlooked in favour of this. As the album draws to a thankful close ‘North and South’ drowns under the weight of over production when is seems to have had more potential as a stripped down song with Strummer and minimal backing, ‘Life is Wild’ brings the recorded output of the Clash to a close a poor full stop, again a Strummer song with good guitar and vocals in the verse all coming to nought when placed against a chorus shouted with inaudible vocals again! And annoying spoken word in the background detracting from any semblance of a song. Ã‚Â

One answer why Cut the Crap fails is “E=MC2” – Mick Jones and Big Audio Dynamite came along at the same time and presented their songs well, clear production brought clarity to their ideas. The irony is for all their musical differences Strummer and Jones walked the same path with ‘This is England’ utilising samples and keyboards as did the bulk of “This is Big Audio Dynamite”. That Mick Jones with “E=MC2” equalled the highest ever Clash single chart placing of ‘London Calling’ at number 11 put it all into stark contrast. The Clash was never solely about chart positions but Strummer surely must have seen the writing on the wall.Ã‚Â Ã‚Â Ã‚Â Ã‚Â  Ã‚Â

The album cover artwork is good, but the Clash Situationist call to arms on the inner sleeve is cringe worthy – instructing would be young guns to get out there and Cut the Crap, the title itself was down to Bernie Rhodes seemingly without consulting any musician involved in the process, the original title for the album was to be “Out of Control” check out the song of the same name and you wonder how it was not included on the album. There are bootlegs out there that give a better reflection of the Clash MkII and the fact that they had many songs that could have made Cut the Crap a better album or indeed made up a good follow up album check out ‘Glue Zombie’ and ‘In the Pouring Rain’ The Clash MkII deserved a better album than Cut the Crap but the reality is this group carried the name “The Clash” and that group deserved so much better. Ã‚Â

History hasn’t been good to “Cut the Crap” – “Give em Enough Rope” seems to have fared better, even the sprawling “Sandinista” an album that would be hard to listen to from start to finish has fared better than “Cut the Crap” There are good songs to be had on this final Clash album “Dirty Punk”, “We are the Clash”, “Three Card Trick” and “This is England” but is the album cutting edge? definitely not, but if you take away the amateur production and the ridiculous backing vocals there is the makings of a good album in there but to get to those ideas and that more fitting epitaph that the Clash so richly deserved you just really do need to Cut through all the Crap!