Home Music Music Reviews The City Is Ablaze: The Story Of A Post Punk Popzine In... 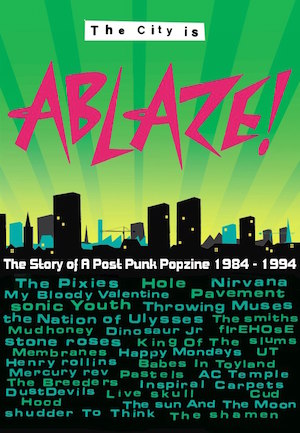 Order the book from here.

The fanzine culture was key to holding the fabric of underground culture together in the pre internet eighties.

There were heaps of them, I did one myself called Rox.

They were a place were machine gun imaginations and music ran riot and there were no holds barred. You could say what you liked and you always did.

Ablaze was one of the key fanzines of the period and ran from 1984 to 1994 and was put together by an initially shy but very determined and smart girl from Manchester called Karen who wrote about what she loved. It went from being a youthful expression to one of the main fanzines on the the scene and it grew up with Karen.

All the best fanzines are like diaries of the obsessions of their editors and Ablaze showed the growth from Karen’s Manchester roots where she was in love with the early Stone Roses (first single period only!) and ends up as one of the key documenters of the Riot Grrl scene.

On the way she interviews and reviews the cream of the underground and reflects the cut and paste music and media culture of the times.

The best bits of her outspokenly passionate zine are now available in book format, published by Mittens On. Alongside hundreds of zine pages, The City Is Ablaze! features new writings by Karren and other members of the Ablaze! team, as well as interviews with fanzine writers John Robb (Rox), Dave Haslam (Debris) and Richard Johnson (Grim Humour), essays by DIY cultural commentators Lucy Cage and Deborah Withers, a re-examination of the Riot Grrrl movement, and an epilogue by Gary Jarman.

This 320-page A4 book also covers other zines that Karren produced in Manchester and Leeds between 1984 and 1994, capturing an era where DIY was de rigueur and indie actually meant something.

Youâ€™ll be able to read original interviews with many bands including Happy Mondays, henry Rollins, Mrcury Rev, Nirvana, fireHOSE, Steve Albini, My Bloody Valentine, Nation Of Ulysses and many others as the book perfectly details the ebb and flow of underground culture. It also includes annoyed letters from Morrissey and Thurston Moore as they clash with the idealism of the young fanzine editor.

It’s the Riot Grrrl period that really defines Ablaze and her championing of the new breed of women bands is quite brilliant and gives you a sense of the importance of that key period whose repercussions are only just starting to hit the mainstream now.

Looking through the Ablaze fanzines all faithfully reprinted here you get that sense of excitement of youth and that real thrill that when Riot Grrl turns up here was a revolution of her very own. There are also her aforementioned run-ins with Sonic Youth and she reprints the correspondence- there is also that very pithy letter from Morrissey written in his spider writing, which is reprinted here and a very tense interview with the Stone Roses where she tells them she doesn’t like their second single and change in style.

The massive book- and it really is huge- is not only a valuable document of the underground media of its period but a sharp reminder of the ideology of the underground. It’s also stuffed full with great interviews, scurrilous reviews and loads of idealism that is just as great to read about now as it was then. The layout of the fanzine, so faithfully reproduced here, is fantastically chaotic and an art form of its own.

Printing the fanzines into a big, glossy book is quite a venture but has been really worthwhile and this is a perfect reproduction of an interesting and valuable period in our music culture and helps to retell the true story of fanzine culture which has been rewritten and edited and miss doug this crucial period.