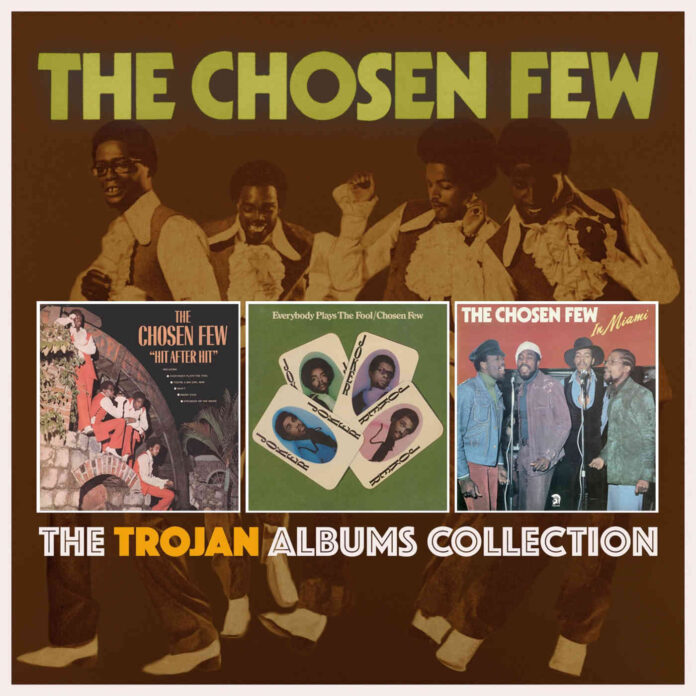 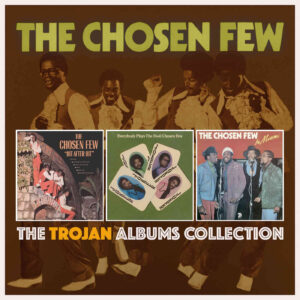 New collection including the albums made during the mid-1970s by vocal group the Chosen Few that were released on the Trojan label in the UK, with bonus tracks coming from their sessions with Derrick Harriott and Lloyd Charmers….Ian Canty chooses to dig a little bit of soul….

Mid-70s Jamaican music was all about dub, Rasta and roots right? The most experimental time for producers, pumping up the bass, stepping up the sound effects and launching the sound into space. But that was only half of the story, because a substantial part of the Kingston scene needed music to dance to and the plain truth was that roots didn’t really cut it on the dancefloor. US soul music had maintained a healthy fanbase on the island from the late 1950s onwards, keeping its popularity right through the ska, rocksteady and original reggae eras. In fact rocksteady had relied on soulful singers like Alton Ellis to really make it work and during the original reggae era singers like Dave Barker thrived with a US attitude.

American soul was still big business there as the 1970s dawned, playing a large part in powering the dance scene. It was perhaps inevitable that this influence, something ingrained on a generation of singers, would eventually come flooding out. The big boom of the boss/skinhead reggae year of 1969 faded into distant memory as the new decade went on and the singers and players looked to integrate other sounds into their performances. Since the majority of the vocal groups had developed their skills in r&b in the first place, it wasn’t a mystery that many of them began to re-explore this in their contemporary works. The Chosen Few, who formed in the final knockings of the sixties, were regarded as possibly the most soulful of their type.

Beginning as a spin-off from the Federals, two members of that band Dave “Scotty” Scott and Franklyn Spence joined up with Noel Brown and Richie McDonald in the first Chosen Few line up. By the time of the recordings here Scotty had gone off to pursue a successful DJ career and the personnel had changed with Spence and Noel Brown being joined Clive “Busty” Brown and Errol Brown (bringing the Brown contingent up to three quarters of the band), as McDonald dropped out. At this stage in their career they were being produced by Derrick Harriott.

An early advocate of the works of King Tubby, Harriott had much success as a singer at the time of rocksteady’s prominence and began producing around then as well. By the early 1970s he had become one of the top producers in Jamaica. He had been involved with the Chosen Few for a while by then, having helmed their Psychedelic Train hit back in 1970. By the time of the first album of this set Hit By Hit in 1973, they had settled into a style of elegant vocal group singing that ran from alto to bass, coupled with pop reggae plus a big serving r&b/soul power. They sought to apply this format to appropriate material, mostly sourced from outside of the group.

It was a simple enough recipe, but works well on this LP, which makes up the first 12 songs of disc one here. On the whole Hit By Hit consists of soul covers with a bit of reggae rhythm in the backing music, not bad in a easy listening sort of way and with some fun moments. Opening song, their take of the Stylistics’ You’re A Big Girl Now, is has a lovely gliding rhythm and does an accomplished job in reimagining the tune as a bouncy reggae number. It is immediately followed by a smart dub that plays off the first take in a very cool way indeed. Unfortunately this is a one off diversion, but showed abundant potential for dub versions of their cuts.

The Chosen Few also do a snappy and fun version of Shaft and though I can’t listen to the song Melting Pot now without thinking of Alan Partridge singing, the Chosen Few do a pretty good job on it. Fuzz distorted guitar, not exactly a staple in reggae, is utilised well on the Acker Bilk(!) song Strangers On The Shore and in a more restrained manner on It’s Too Late, a Lloyd Charmers production of the famous Carole King number, featured later in the bonus material. There’s some subtle trombone that enhances the title track, which also begins with neat semi-spoken word intro and wah wah flanges give original I Wanna Go Back Home a different level. Hit By Hit, very much a creation of the early 1970s when reggae aimed directly for the mainstream after the 1969 goldrush was over, is mostly a well-crafted and very commercial collection.

The second part of this disc takes in bonuses produced by Harriott and Charmers from around the same period. Though credited to the Chosen Few the Charmers’ sides are the work of main vocalist Noel Brown, but for me the additional Derrick Harriott cuts have the edge. Why Can’t I Touch You is thoroughly fine and smooth soul and a great version of the Billy Paul single Am I Black Enough For You? really hits the mark.

Second album Everybody Plays The Fool from 1975 kicks off disc two of this set. It carries on in very much the same vein as Hit By Hit, familiar cover versions given sweet reggae reboots. “Prince” Tony Robinson slipped seamlessly into the production chair for this LP. The cool and laidback performances even seem to predate lovers’ rock, particularly the horn-led Hide And Seek. Smokey Robinson And The Miracles’ songbook gets dipped into twice with I Second That Emotion and Tears Of A Clown featuring, with the latter’s more urgent reggae rhythm and simple piano line pleasing to the ear. A slow version of Curtis Mayfield’s Queen Majesty is possibly the record’s highlight – a gospel vocal style and rising brass really go with each other perfectly.

Between the two albums there is a very good and funky bonus track, a cover of Kool And The Gang’s Funky Stuff as (I Can’t Get Enough Of That) Collie Stuff which just about pips the Reggae Stuff version on Everybody Plays The Fool. This track serves as ideal preparation for what comes next.

The Chosen Few In Miami, recorded in 1976, is the final album included in this set. This recording represents the point where the band went almost straight over into pure soul/funk, retaining only the barest hint of reggae in the backbeat. King Sporty, a Miami resident, was on the production duties this time around and the band had also been playing regular dates on the west coast of America. This time spent in the States must have intensified their soul and funk leanings, tilting the crossover firmly in their favour.

Judged by this criteria, the LP is actually pretty damn groovy, with their skanking version of Elton John’s Daniel being the only real reggae track on the record. Elsewhere Funky Buttercup really jumps and Hit Me With The Music shows a band now much closer to James Brown than Dennis, flowing and muscular funk with busy percussion being highlighted. In The Rain has some neat wah wah guitar and upbeat horns, with the Few’s honeyed tones standing out. Members of K.C. And The Sunshine band were also on hand in the studio to help to root the tunes firmly in authentic funky territory. Night And Day even gets close to the Philly sound that was all the rage at the time. The Chosen Few In Miami is a very danceable and well put together platter, if more often than not a fair distance from their reggae roots.

In summary The Chosen Few The Trojan Albums Collection may be mostly in a lighter and more easy listening mode than is my preference, but one cannot deny the vocal talents of the band and the inventiveness of the producers who sought to squeeze a few more wriggles out of some very well-known and much-covered songs. Strangely enough the LP where they went almost totally over to funk/dance is probably my favourite of the three, as they adjusted very well to pure funk and soul. The other two albums have their moments, but at times the balance of soul/funk and reggae doesn’t quite work. Being a barometer of the times the Chosen Few showed that reggae was still viable as a pop force away from the dub/roots underground, with this set provides ample evidence of their soulful prowess.