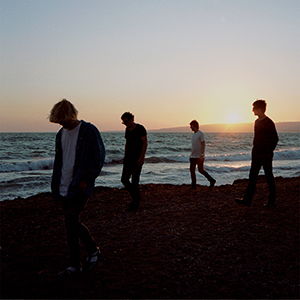 The Charlatans return with their twelfth album, Modern Nature. A remarkable affirmation of life, the record has this long-standing band coming out of dark days sounding better than ever. Features Editor Sarah Lay reviews.

The world outside my window is in the shimmering embrace of another heavy frost. The mundanity of the uniform brick and tile of houses transforms, magical, sparkling as the streetlights reflect on the ice. I close the curtains against the dark and for the twelfth time in 25 years I sink into the first play of a new album from The Charlatans.

Twelve albums. A twenty five year career. These things alone are amazing in a culture so obsessed with the new. And the longevity means, of course, that life (and death) has happened to this band, the story of their dark days as well known as the highs of their hits. Modern Nature is a record of resilience, of survival and a brilliantly melodic statement of the band’s resolve to find a way continue following the death of drummer Jon Brookes in 2013.

After such a loss the songs that would allow them to continue didn’t come easy. That struggle isn’t reflected in the sound – Modern Nature has a lightness about it, a pop breeziness to the melodies, a pretty surface underneath beneath which exploration of life, death, love and other such flows effortlessly.

Album opener Talking in Tones begins with a sparse set of clinically clicking rhythms, spacey keys and cool-to-the-ear bass lines. There is something sombre about the verse as echoing but carefully controlled vocals, giving a cue that we should begin this listen with a reflection. But as the chorus builds Collins’ guitar bubbles up and we’re encouraged not to be saddened by what has been but to celebrate what is yet to come: “I feel strengthened, by your presence, it’s like heaven”. As the first single and the first new material from the band since 2010 Talking in Tones feels like a statement, perfectly but gently setting the mood for the rest of the album.

Positioned then, it is followed by So Oh. This is a mellowed, not diminished, version of the indie floor fillers which pepper this band’s back catalogue. A strong bass line is upfront and centre as sliding riffs and layered vocals whirl around it. There is something of The Jam, something of the Wonder Stuff, but so very much The Charlatans. It defies you not to smile.

Further mellowing as the soul groove, a hint of bouncing disco rhythm, of Come Home Baby builds towards that big, bright sing-a-long chorus of joyous vocals backed with soaring harmonies. Tim Burgess has an infectious enthusiasm about him in person, a sense of peaceful happiness emenates and here that impression is reflected both in the lyric and the can’t-keep-it-in delivery: “Come Home Baby, Come Home Baby, Kiss Me Gently, I can’t wait, Don’t hesitate, Let’s be together.”

Elsewhere in the track the theme of moving on appears again and that balance between dark and light, pain and recovery, death and life, the grief of loss and the celebration of having known, emerge as themes that weave subtely throughout the whole album.

As we head into the middle of the album that signature sound is spun out to become something quite new. In The Tall Grass has solid rather than chunky organ and tribal rhythms both brought to the fore with the vocals, confidence shown in allowing the song to be full of space rather than heavily layered.

On Emilie we reap the benefit of experience and the eclectic and passionate love of listening to music as well as playing it that The Charlatans share. There is an almost country rock guitar line with tight, looping beats – a mix which on paper shouldn’t work as well as it does when you hear it here.

Let The Good Times Be Never Ending brings the album to a new peak. Scuzzier guitar, plenty of snare, bolder organ, that groove to the bass line again and a steady, confident vocal delivery. “We know each other, I get the love that you’re sending, Let the good times be never-ending” is beautiful spinning on record, with that lyric given the space it needs by a funky, fast-paced instrumental trip out to the end. There is already a flutter inside at the thought of this emotional roll being given a raw edge when delivered live.

But it’s not all grooves and smooth melody; Lean In presents with a sinister background swirl topped with a dizzying complexity of sounds. The guitar goes darkly through this track, the drumming building up speed and the vocal giving the impression of being encircled. This is where the album comes closest to being claustrophobic, avoiding being over-powering by cutting through the layers with some soft strings and on the outro a reminiscence of tracks past.

The album closes with Lot To Say, a return to the spun out fuzziness introduced earlier in the record. The guitar once again gentle and pastoral, loops and electronic echoes keeping this moving on not looking back.

The strength of Modern Nature is in it being an album not of a band’s rebirth but of one adapting to circumstance, celebrating their history but moving forward, always moving forward. It’s DNA is instantly recognisable as The Charlatans – the swooping keys, the looping drums, bass-led melody, the twinned guitar lines gently picked or boldly riffed and the buzz of accented vocals. Reassuringly familiar it’s an evolution of their sound. This feels like a step which could only be taken by a band which has decided to be bolstered, rather than weighed down, by its history.

Modern Nature is an album bursting with love, tender in its honesty, full of soul, delivered with strength. And despite setting forth from the pain of loss, and the possibility of being lost, this is a record of acceptance and celebration.

A beautiful, uplifting pop album, understated and slow-burning but undoubtedly one of The Charlatans strongest records.

The Charlatans are on tour in Spring – details on the band’s website.

All words by Sarah Lay. You can read more from Sarah on Louder Than War here and you can also find her on Twitter.