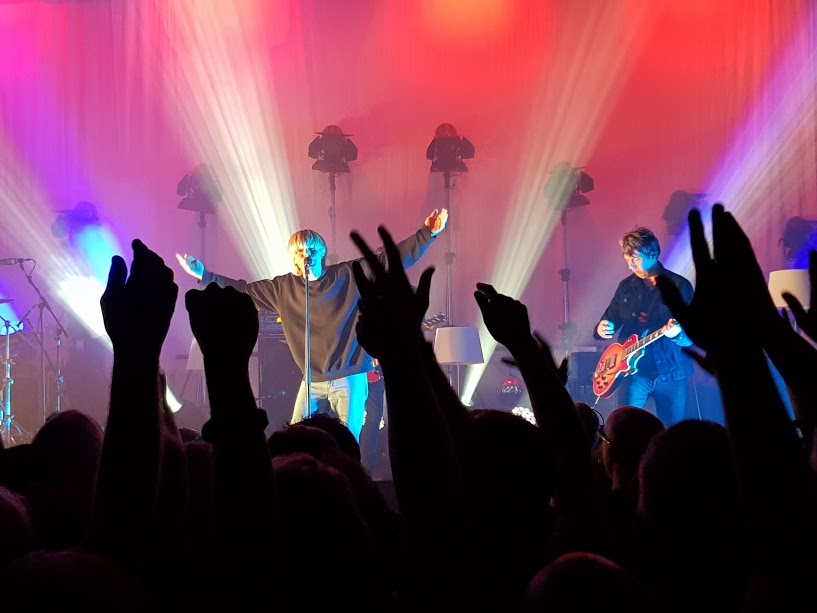 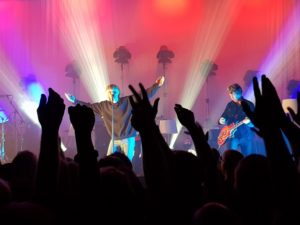 Tonight saw the finale gig of a four night stint by Northwich legends The Charlatans on their home turf, playing to a lucky sold out audience and being filmed for cinemas across the world. To make the night better the excellent BMX Bandits were over the road at The Salty Dog earlier in the evening with the man himself Tim Burgess watching a cracking set of pop gems. 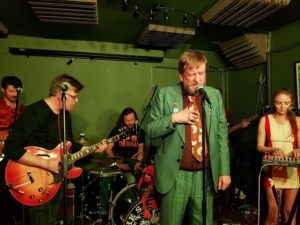 I must admit from the start that BMX Bandits were one of those bands I missed first time round and they escaped my sonic radar. What a fool I was. After listening to BMX Bandits’ Forever I an now a convert. Tonight they pleasantly surprise me with a great set of songs. They enter the stage with indie legend Norman Blake of Teenage Fan Club as guest guitarist / bass player (he was actually in an early line up of the band) and get the Dog in a bouyant mood with opener Little Hands. Duglas is a born showman and looks dapper in his green suit and flashy tie and even pulls out a kazoo for some of the numbers. His between song banter is funny as fuck as are the lyrics to some of the songs like Serious Drugs or The Way Of The Wolf. There are the ironic love songs like Love Me Til My Heart Stops and It’s In Her Eyes which are real crowd pleasers. The trick with Duglas is he has that Scottish sense of humour that wins you over, and he knows how to pen a great pop song.

The highlight of the set is the hilarious Girl At The Bus Stop which is comedy genius at it’s best and very infectious. They go down so well that they have to do an encore and go off to a great applause from a crowd who are bowled over by some belting tunes. 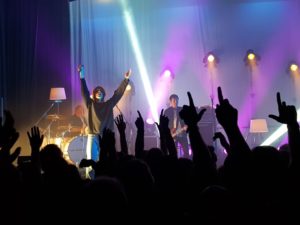 Next stop is the Northwich Memorial Hall across the road and you can see the excitement building around the streets of Northwich. The pre gig music is a mix of indie classics and Northern Soul picked by the band to set the scene. The band  arrive on stage to mass applause and dive straight in with their massive back catalogue of indie greats. Can’t Get Out Of Bed, Blackened Blue Eyes and Tellin’ Stories are belted out and Tim has the crowd chanting “Northwich” from the off.

North Country Boy is a mass singalong and Plastic Machinery is a Charlatans masterclass in how to perform live. Tim is filming the crowd inbetween all the ruckus and I’m sure everyone will want to see the end result when it’s out for the public to see. They do a couple of new songs including the excellent Totally Eclipsing which will be a sure fire hit. You know they have the audience when The Only One I Know airs, and I get a good drenching from the flying beer or whatever… Over Rising and Come Home Baby finish the set and they go off stage for a breather. Meanwhile the crowd are stomping the floor and begging for an encore . They hit the stage again with I Never Want An Easy Life and then set off with what everyone was waiting for, the amazing Sproston Green which is turned into a psychedelic party piece and proper wigs out for our pleasure.

A great end to a brilliant week of music in Northwich and I’m hoping this becomes a yearly event for the town. And it’s not even over yet.