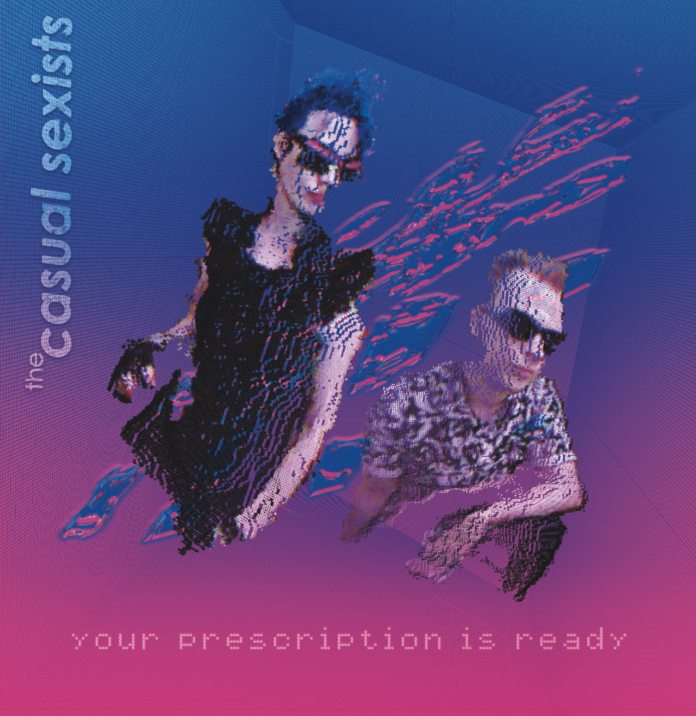 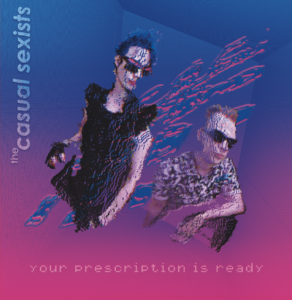 The Casual Sexists: Your Prescription Is Ready

The Casual Sexists administer a vibrant elixir with their debut album Your Prescription Is Ready. Bryony Hegarty reviews for Louder Than War.

Purveyors of avant-bedroom-pop, The Casual Sexists mix spirited electronica with irreverent commentary. Their debut album, Your Prescription Is Ready, is a concoction of acerbic humour and sonic delights. New Yorker Varrick and Londoner Ed Zed describe the band name as “a way to confront the casual sexism still so woefully ever-present in our world” and their sound as “disjointed pop for a disjointed era”. The duo’s work has been likened to Soft Cell, The Flying Lizards and Madonna’s Vogue. Taking a unique spin on these influences they offer fresh perspectives.

Word play is central and further to this, the contrast of Varrick’s mellifluous tones and Ed’s English intonation creates texture. A transatlantic thread runs through the album, such as UK cultural references to Soho, Channel 4, and the tabloid press, mingling amongst slick New York vibes. Varrick and Ed say “Each song has a creative process of its own, and most are built, rather than written”. The music that emerges is refreshingly unfettered by lock down suffocation.

Moving Forwards Moving Back contrasts gritty commentary and harmonic delivery before I Like Shapes takes tongue-tripping inspiration from concrete poems. Pulsating rhythms on My Heartbeat Keeps Me Awake make for an infectious tune, further enhanced by Varrick’s ironically dreamy vocal that shimmers across the track.

Electro-punk number Fresh Legs encapsulates both the trance-like enticement of dance floors and accompanying challenges of protecting personal space. Elaborating on a theme, the track also incorporates rave beats and sardonic voice over from the archetypal nightclub bore. With clubs having been empty for so long, if you’ve forgotten that feeling Fresh Legs will take you back there.

A playful and accomplished release.