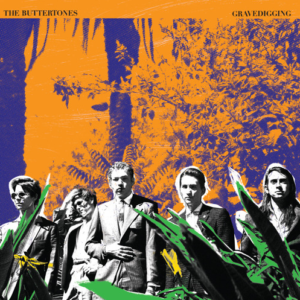 Louder than War’s Ioan Humphreys gets pleasantly acquainted with some nice and sleazy psychobilly stomp, Sadie’s A Sadist by The Buttertones.

The Buttertones hail from the Hollywood hills and are apparently cut from bare knuckle boxing and high speed car chases. Whether this is real life or from some Raymond Chandler inspired pot boiler who knows? But The Buttertones’ latest release Sadie’s A Sadist on Innovative Leisure just screams 1950/60s sleaze and I for one bloody approve!

The video is full of fun and is heavily influenced by the Grindhouse double features of the time that were lovingly re-created by the film makers Robert Rodriguez and Quentin Tarantino over a decade ago with Planet Terror and Death Proof respectively. For Sadie’s A Sadist, the band lean heavily on the Death Proof car chase side of things, with additional respectful nods to the sexploitation movies of Russ Myer.

The music itself is a pure psychobilly stomp that conjures up influences such as Guana Batz, Demented are Go, The Reverend Horton Heat and The Cramps. It’s 100mph frenetic, joyfully addictive and is another slice of the psychobilly/rockabilly revival mayhem that keeps it’s tongue firmly in its cheek and refuses to go away. Nice addictive stuff.