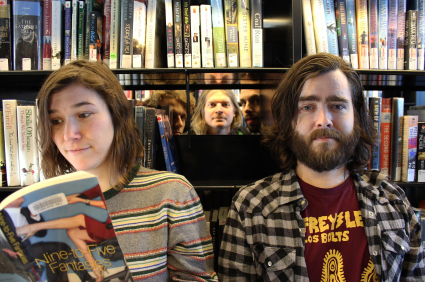 The Burning Hell –  ‘Men without hats’ / ‘Fuck the government, I love you’

Ok so I am very new to ‘The Burning Hell’. This is just a double a-side review. However, looking a little into their history, I realise that I am very late to this clever, tuneful party that has in one shape or form been producing music for nearly a decade and are currently on their seventh album (??!!??) Called ‘Public Library’, the lead release from this obviously prolific Canadian band is a double a-side called ‘Men without hats’ / ‘Fuck the government, I love you’.  Immediately I am drawn to their sense of humour and (possible) political sensibilities that generally make life a little more interesting and bearable.

As ‘Men without hats’ chugs away with an insistent lovely riff on an acoustic guitar, it is pretty and lo-fi, yet is able to grab ones attention. And after a few listens, you find yourself singing along to the gentle lyrics that sometimes boarder on Art Garfunkel, but with a possible sense of mischief? Mathias Kom sings about “a pervert in a video store” and immediately you are there with him. Watching, hiding and laughing. And in the next beat he sings about a “blister in the sun”, name checking a song by a band (The violent Femmes) that they certainly share comparisons with.

The second track ‘Fuck the government, I love you’ is a lovely duet with Mathias and Ariel accompanied with the odd trombone (?) Arial sounds like a young Kim Deal and this is one of reasons that immediately draws me in. This song is self referential, self deprecating and a beautiful and hilarious call and response from both singers. I can’t help but compare this tune to similar outputs by Adam Green and Kimya Dawson as solo artists and/or as The Moldy Peaches. However, if The Burning Hell are happy to be grouped and accepted within the ‘Anti-folk’ community then I can’t think of a nicer place to be! Original, playful and meaningful stuff. Nice.