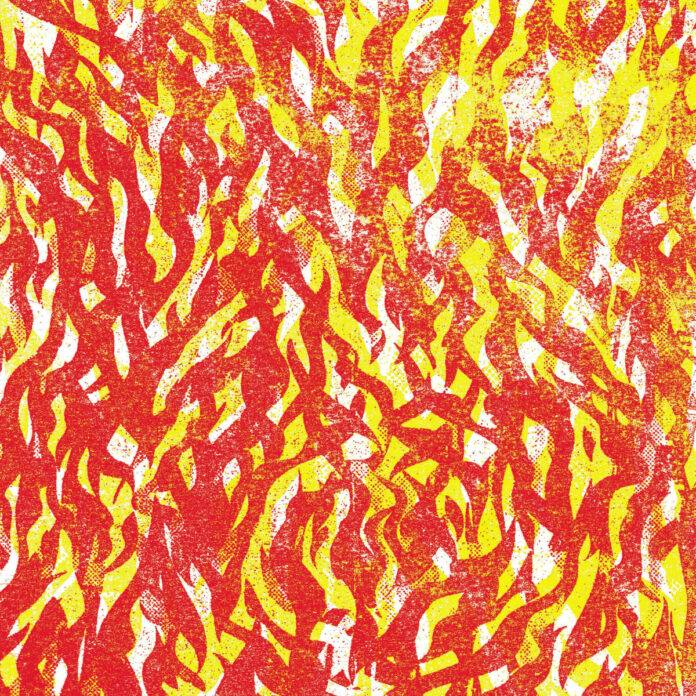 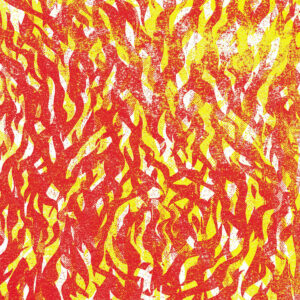 Following on from his interview with Kevin Martin aka The Bug, Andy Brown puts his speakers to the test with Fire, a brand-new album of dub, dancehall and noisy dissent released via Ninja Tune. He shares his thoughts for Louder Than War.

Kevin Martin doesn’t make the kind of music you’ll be hearing piped quietly into the background while you eat at one of Tim Martin’s three million Wetherspoons restaurants. The Bug has always been a bold and in-your-face kind of enterprise and Fire is certainly no exception. Drafting in his very own A-Team of MCs, Martin has crafted an LP of heavyweight rhythms for your heart, mind and body. Through close and meaningful collaboration The Bug has produced a sound that channels dancehall, reggae, grime, hip-hop, dub, noise and poetry. Everything comes together in one gigantic and highly danceable carnival of sound. Every inch of the record is pushed firmly and defiantly into the red to create the most overwhelming experience possible. It’s one hell of a ride.

The Bug first came to my attention with the genre-straddling urban goliath that was 2008’s London Zoo. I’d never heard anything quite like it. London Zoo’s opening track – Angry – saw vocalist Tippa Irie vent his spleen: “So many things that get me angry and so many things that get me mad.” Anger has always been a theme in The Bug’s work and Fire will undoubtedly be the most vitriolic record you hear all year. While Martin’s music has nothing in common with the three-chord thrash of punk, it does share its unmistakable spirit. When it comes to The Bug, anger most certainly is an energy. A record like Fire is, perhaps, the only sane response to a world that seems to be unravelling at every turn.

The stall of collaborators is impressive: a family of idiosyncratic MCs, poets and visionaries. It’s only here that you’ll find Jamaican ragga vocalist Daddy Freddy on the same seismic slab of wax as Philadelphia-based experimentalist Camae Ayewa, aka Moor Mother. The latter captures much of the record’s spirit with the superb Vexed, an ominous, brooding and thoroughly fierce groove that finds Ayewa stalking the dusty, dystopian landscape as she spits and growls through the noise. It’s a track I keep coming back to, yet Fire is an album that doesn’t put a foot wrong. Kevin Martin has been crafting LPs of sonic Armageddon since his days with GOD in the late eighties and that fire, if you’ll excuse the pun, is still burning strong.

Marc Veira, aka Flowdan, provides three staggering contributions, his lyrics and style as formidable as we’ve come to expect. Bomb channels the edge-of-chaos energy that runs throughout the LP, as his rhymes evoke images of war-torn lands and fleeing refugees. With recent events in Afghanistan, it couldn’t be more relevant. Pressure finds Martin’s electronic soundscape looming like a Godzilla-size threat, while Hammer is ridiculously and relentlessly intense.

Conflict and catharsis are never far away on Fire. Just listen to War, as Kingston’s gravelly-voiced dub-poet Nazamba delivers warnings of ideological, mystical, biblical and global war. The response to all this imminent man-made doom is perhaps best summed up by Logan on the appropriately-titled sound system banger, Fuck Off. Fire is an album that thrives on tension and release.

Fire is the kind of album where you have a different favourite track every time you listen, from the evil heat of Irah’s delivery on the sinister electro-dub of Demon to the searing social commentary on High Rise, courtesy of Manga Saint Hilare. The quality, it has to be said, is utterly relentless. Amongst the familiar collaborators, we’re introduced to a fiery 5ft Northampton-based grime MC by the name of FFSYTHO – the acronym standing for ‘For Fucks Sake Why Though’. I’m not usually a fan of acronyms, but you can’t argue with that, can you? FFSYTHO (real name Shell) delivers the frantic How Bout Dat with the kind of fearless energy, style and lyrical finesse that will knock you off your feet. Pure, unfiltered fire.

Trinidadian writer and musician, Roger Robinson ties the whole thing together with two poems that bookend the LP. The Fourth Day provides the album with an ominous yet all too familiar picture, as Robinson describes a world where we see our families through square screens and the robots deliver our food. “Hello loneliness,” intones Robinson as the track broods, “goodbye compassion.” It’s an incredibly powerful way to open the album, but even this doesn’t quite prepare you for the final track. The Missing is an incredibly powerful ode to the victims of the Grenfell Tower disaster: a devastating, passionate and chilling piece of poetry. I was left absolutely stunned. It’s tracks like this that elevate Fire from being a great album to being an album you simply need to hear.

The album tackles some heavy subject matter, but it would be misleading to call it ‘dark.’ Fire is a reflection of and reaction to the world we live in, the floor-shaking dub designed to snap you out of complacency and instil a little fire in your soul. In times of division, we need music like this more than ever. The Bug’s work may be confrontational, yet there’s an underlying unity here that draws dub heads, noise freaks and hip-hop fans together under one roof. That roof would ideally be located at a live music venue, fitted out with a sound system fit for the gods. It isn’t the kind of music that should be greedily hoarded by underground aficionados. Fire is a gift to the world.

Other Kevin Martin projects include King Midas Sound, his recent soundtrack to Solaris and his solo work.