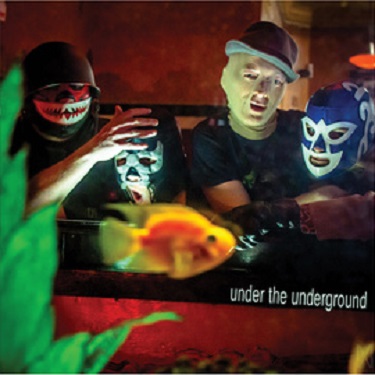 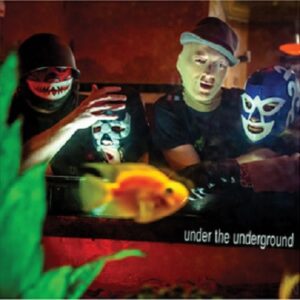 The Bucky Rage- Under The Underground (self-released)

In a recent interview with Louder Than War’s Guy Manchester, legendary road rat bass king Mike Watt revealed that he views albums as flyers for gigs, the live experience being the main focus for him. I suspect that the same is true for The Bucky Rage- they sound like a band that thrives on entertaining a bar packed with boozed-up punters intent on having a good time, in the tradition of countless 60s US garage bands who would grind out ‘Louie Louie’, ‘Gloria’ and every Bo Diddley song they could think of as the beer kegs were drained at student fraternity parties.

These Glasgwegian garage punks have a penchant for Mexican wrestling masks, an affectation which appears to have infiltrated garage/punk aesthetics through the late 70s/early 80s LA Chicano punk scene, perhaps popularised in the UK by the cult ‘Love and Rockets’ punk comics written by the Hernandez brothers. Surf band Los Straitjackets are particularly associated with the outfits, and The Bucky Rage’s adoption of the look fits with their obvious affection for the music of that time and place.

Under The Underground often sounds like it was conjured up by the band while under the influence of the first two Pixies’ albums- the peerless ‘Come on Pilgrim’ and ‘Surfer Rosa’, before producer Gil Norton stripped out much of the intrigue and danger of the band. Talking of the Pixies, has there even been a worse, more cringe-inducing album title than ‘Indie Cindy’? Oh, how the mighty have fallen, but fortunately, the Glasgow band show no signs of following the Pixies down the path of sanitised college rock.

If Taco Bell had a garage-punk house band, it would be The Bucky Rage. Connecting the dots between Sam the Sham & the Pharaohs, LA Chicano-Punk pioneers The Plugz and the afore-mentioned Pixies, the group also draw inspiration from The Mummies and The Country Teasers. It’s fair to say this is very much a party album, not designed for cerebral contemplation.

Album opener ‘Wild Bill’ makes very effective use of a wall of feedback squall abetted by classically cheesy frat-rock keyboards by Pete Chaos. The leave-your-brain-at-the-barnyard-door party spirit of ‘Farmer John’ by The Premiers or even the daft, frenetic genius of ‘Roo-Buh-Doo-Buh-Doo’ by The Statesmen are brought to mind over the course of the album, as is ‘Free Cocaine’ era Dwarves.

Third track ‘Desperate and Dangerous’ is a nugget of prime 60s garage, while ‘20:20’ chucks Bo Diddley and Hasil Adkins into the blender. Elsewhere, ‘Holy Cripes!’ has a satisfying lo-fi country feel, ‘O’ Ragin’ Sea’ is a woozy sea shanty and ‘Heart of the City’ reveals solid songwriting buried within the Pussy Galore-like trash and burn reinvigoration of ancient blues, surf and rockabilly forms. There’s even a frugging homage to Link Wray, ‘Missing Link’.

Jon Spencer’s early band took a similar approach to “the Rage” on albums such as ‘Right Now!’, ‘Groovy Hate Fuck’ and the irresistible ‘Sugar Shit Sharp’. Big Black is another reference point, particularly when guitarist Handsome Al unleashes torrents of noise from his Vox Phantom and Kyle Thunder lays down his steely, crunching basslines. The Bucky Rage’s pell-mell, brain-bypass methodology raids rock ‘n’ roll’s graveyards to resurrect its corpse in an irreverent post-punk form, undoubtedly inspired by The Cramps, but also incorporating the innovations of No Wave and industrial punk. The purpose of their mission is clearly to make the whole jalopy dangerous and thrilling again, and this album hits with the brevity and intent of the first Ramones’ album.

Shrouded behind the nom de guerre of “Philthy Collins” and a natty trilby and luchador mask combo is The Bucky Rage’s drummer, Hugh Mclachlan, who also fronts garage rockers The Reverse Cowgirls. The Cowgirls have developed over recent years into a riotous hoedown of cow-punk exuberance with a double shot of The Gun Club, becoming in the process a major presence in Glasgow’s resurgent garage rock scene. Taking an even more insouciant path, The Bucky Rage don’t appear overly concerned about hiding the garage punk cadavers that these songs have been harvested from, putting the emphasis on boisterous party tunes rather than pursuing an Ivor Novello. In that respect, The Bucky Rage remind me of a late 80s Glasgow punk band called The Stretchheads, who invented a singular strain of “daft laddie” punk that was pure, joyful anarchy.

The Bucky Rage have been around for 10 years now, releasing a plethora of EPs and split singles, but this is their first full long-player. The band tour regularly, taking in venues from Dundee to London, but if you can’t join them for a bout at your local cellar dive, don’t be a heel, slap on this album and brave a few rounds with these 12 piledrivers. By the end of its 23 minute blitzkrieg, you’ll have been pummelled like a turkey-neck and won’t be crying “Fix!”, that’s for sure.

Buy Under The Underground here.

The Bucky Rage celebrate the launch of Under The Underground at Weirdsville (Facebook event page) London, on November 29th.

All words by Gus Ironside, whose Louder Than War author’s archive can be found here.