Home Music The British Pop Archive opens in Manchester in May

With its permanent home at The John Rylands Research Institute and Library in Manchester, the archive will present a collection of artefacts that shaped pop culture in Britain and worldwide.

For a city with a vibrant musical heritage such as Manchester, the archive sums up ideas that have been scattered around and defined the atmosphere of genius loci. A similar attempt was made last year with Use Hearing Protection: The Early Years of Factory Records, the great exhibition at the Science and Industry Museum. Indeed, the success of this display prompted questions about permanent incarnations. 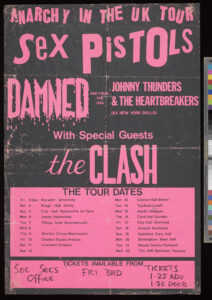 Although not directly linked to the Science and Industry exhibition, the archive’s content spotlights subjects from the Manchester pop culture scene (but not only). Among the items are punk fanzines (Jon Savage’s London’s Outrage), original posters (works by Peter Saville and other pivotal announcements such as Sex Pistol’s Anarchy Tour), music magazines (particularly, Manchester-based publications such as City Life), archival images, handwritten lyrics (Joy Division’s She’s Lost Control and Atmosphere) and notes. The latter includes writing by Rob Gretton, the manager of Joy Division and New Order, who outlines the concept for JD: “Personally, I would rather […] try to approach everything from a different viewpoint”.

Focused on pop culture artefacts, the archive offers a diversity of media. The visitors will have access to the complete corporate archive of Granada Television as well as rare printed materials (aforementioned fanzines and more).

With its opening in May, the BPA will launch the Collection exhibition that presents the scope of Mancunian pop culture. Other contents of the archive will include items that shaped pop culture not only in Britain but far beyond its insular borders. Elaborating on the idea Jon Savage said: “Britain’s pop and youth culture has been transmitted worldwide for nearly sixty years now. As the most fertile and expressive product of post war democratic consumerism, it has a long and inspiring history that is in danger of being under-represented in museums and libraries”.

The BPA and Collection exhibition will open on 19 May.

Poster – courtesy of The University of Manchester.