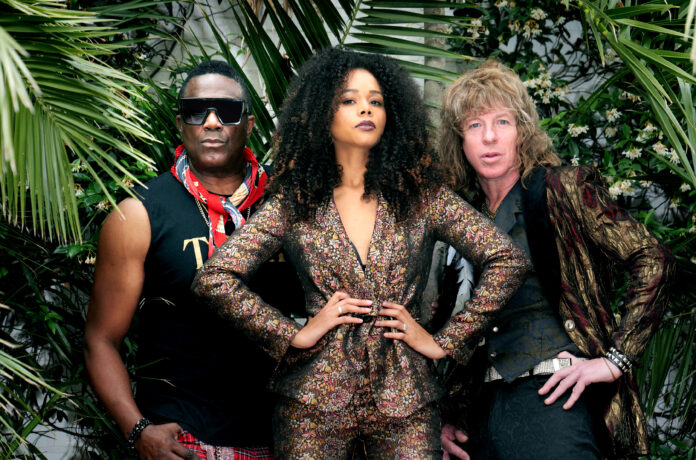 Despite a career spanning three decades, dousing the charts with their uniquely super-chic brand of funky acid-jazz pop hits, anyone who has caught The Brand New Heavies on their current tour, or heard their most recent album TBNH (as good as it is succinctly named) will know that they show no signs of slowing down any time soon. In fact, they are producing, in my opinion, some of their best ever work – and barely appear to have aged a day doing it.

I caught up with Andrew Levy, founding member and strong contender for the title of coolest man in Britain, to discuss all things Heavy – from line-up changes to collaborations, style inspirations and hanging out at the Playboy Mansion.

LTW: What does it feel like to be a Brand New Heavy?

AL: Being a Brand New Heavy is about keeping the spirit of 70s disco and funk alive, mixed with the sounds of the 90s and a whole lot of musical energy. We’re self-taught musicians having a great time playing together live, which is why we make so many people want to get up, dance and have fun. It’s an honour to still be in demand all over the world and I think the fact that we have one foot in the past and one in the present gives us unique appeal.

LTW: How much would you align yourself with the acid jazz scene?

AL: I think as we were the first band from the Acid Jazz record label to make it into the national pop charts and the American Billboard charts, we see ourselves as the pioneers of that scene. We had some great songs and a few of them went on to be international hits that people still love nearly thirty years later.

LTW: Your former drummer, Jan Kincaid, was regarded as a key force in the band. However, your first album following his departure is your strongest musical statement since the 90s and a return to the unique cool of the classic Heavies sound. Has the change in line-up been creatively liberating for you?

AL: We miss Jan Kincaid. We all grew up together from the age of eleven, so it was a big surprise when he decided to disappear out of the blue. I guess the impression to some was that he was the driving force, but there was a magic between the three of us and the driving force was each of us equally. Simon and I have always played a pivotal role in every Brand New Heavies album and single; in fact, I was the designer of our legendary sun and elephant logo back in 1986.

I also wrote a few of our biggest singles, You are the Universe being one of them, and Spend Some Time. Most of the Brand New Heavies’ songs are co-written between the three of us and others. When we released our last record, TBNH, we had a lot to prove, so put a lot of effort into writing and producing it ourselves. I guess the public perception is of the two front guitarists from the band wearing crazy clothes and prancing around on stage, which doesn’t always translate into talented producers and songwriters.

LTW: What was your experience working with Mark Ronson on your fantastic cover of Kendrick Lamar’s These Walls? I believe you had previously worked with him on a Robbie Williams track?

AL: Mark Ronson is an inspiration, as he really understands our genre. He came to see us in the early 90s when he was an up-and-coming DJ and has since said publicly that it changed his life, and that we turned him onto soul and funk music. He’s also put our first album in his list of top ten albums in the world!

Mark produced These Walls on our last album, TBNH, and was recording with Miley Cyrus during the making of this, so a lot of the work was done online and on Zoom. His creative force for the song was really pulling all the musicians into the project and mixing the track. Mark also booked us to play for his 40th birthday party. That was incredible and, again, an honour. I got to shake hands with Mick Jagger, who knew about the Brand New Heavies, which made my year!

LTW: How has it been working with classic Heavies vocalists, N’Dea Davenport and Siedah Garrett again on the new record?

AL: We’ve learned so many lessons about music and performance from Siedah and N’Dea; they’re both astonishingly talented women in all areas. We would love to work with them again. One example of how amazing it is to work with Siedah was when I gave her a cassette with the music on it for You Are The Universe and two days later, she sent the cassette back with her vocals and a handwritten lyric sheet. I was blown away and knew that song would become one of our anthems. N’Dea also co-wrote Dream On Dreamer with Dallas Austin, a US writer.

Angela Ricci – also a force to be reckoned with – is our new lead singer and Angela will be co-writing with us on new albums. We’re working on a new album now as part of a new seven-figure record deal with Edel Records. Our first single will be out in spring next year. Angela became a permanent member of the band during our 44-date summer tour this year.

LTW: The Brand New Heavies are known for their strong sartorial choices and your recent press shots are no exception. Who are your personal fashion influences?

AL: I love dressing up and I’ve always been surrounded by costumes and show clothes. My mother sent me and my sisters to dance school when we were little, so I’ve always watched my mum making clothes and costumes. I like any designer who is flamboyant and not afraid to add a few sequins and a bit of glitter!

Back in the 90s we had Vogue, GQ and Tatler writing articles on our sartorial choices. It was incredible for us to make it into Vogue. We were a little funk band from Ealing and we were blown away, and felt as if we made an impact.

LTW: Which of the Heavies’ records do you hold in highest esteem?

AL: I think the last album, as it was a kind of ‘make or break’ record for us, is the most important album.

LTW: What memories do you have of filming the Sometimes video? Did you meet Hugh Hefner on set?

AL: We did meet Hugh, but not on set. We went to the Playboy Mansion a week before and I’ll leave it there! He was really into the music and let us use some archive footage from the 70s. It was a lot of fun and a massive set, so we felt like proper movie stars for the two days it took to shoot. We had to re-shoot bits of it when Q-Tip from A Tribe Called Quest agreed to rap on a remix version of the song.

LTW: What other current artists are you listening to?

AL: I seek out and listen to up-and-coming talented singers and musicians, and I’m really interested in championing them – so much so that I’m launching my own Jazz Funk Supper Club this November at Balfour at St Bart’s in East London, with world-class food and cocktails, live music and DJs. Singer-songwriter Kianja, who is absolutely incredible, will be joining us on the first night and the amazing Roberta Gentile, a young Italian singer currently recording her debut album, who has also toured with Incognito. I think if you’re reading this, you should come!

LTW: 1994’s Brother Sister was a big album for The Brand New Heavies, with hits such as Dream on Dreamer and Midnight at the Oasis. What memories do you have of making that record and how do you think the sound of the new album relates to that era?

AL: I have very fond memories from recording Brother Sister, as a lot of it was mixed and overdubbed in Hollywood, where we spent weeks in a hotel called The Mondrian on Sunset Boulevard. Lots of fun was had there, as major music stars were staying there at the time including Grace Jones, who invited us out for a night of clubbing! We also met George Michael in the Sky Bar on the top floor and we recorded at the studio where Michael Jackson recorded some of the Thriller album called ‘Ocean Way’, which is near Santa Monica, just down the road from West Hollywood. It was great recording away from home because we could devote our whole time and attention to mixing and writing the album.

All the lessons learnt from that record, I’ve been drawing upon for the latest record, to make a great recording and listening experience for our fans.

LTW: The last few years have been culturally and politically tumultuous. How do you feel about the world right now?

AL: I feel that things will never be the same following the past few years. But a human desire for escapism and fun, dance, love and laughter will always be there and hopefully, The Brand New Heavies will be there to meet those needs!

LTW: After your current tour, will there be new Heavies music on the way?

AL: The tour ends in December – check out our dates and come and see us live! We’ve got Indigo at the O2 still to go and various nights in Scotland, as well as Nottingham, Leeds and Peterborough, so we’re all over the UK. I think we’re going to take a two- to three-week break and then we will continue writing the new studio album. We’re also putting together an acoustic album, made up from our greatest hits and new material, also scoring a classical version of the greatest hits.