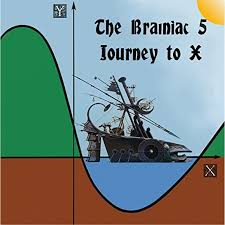 The Brainiac 5 – Journey To X

New album by long-standing West Country Psych-Punk outfit the Brainiac 5….Ian Canty hears the sound of 67 go head-on with the sound of 77 in 2017…………..

Despite originally being formed way back in 1975, the Brainiac 5 remain a strictly subterranean phenomenon. In 1977, when they first started to get any sort of attention, the only real comparison to what they were doing was Robyn Hitchcock’s Soft Boys (and possibly, stretching it a little, Twink and the Rings/Fairies), in that they crossed the then-current Punk Rock sound with a strong Psychedelic twist. Unleashing the self-released “Mushy Doubt” EP in 1978 and the “Working” single a year later, the Brainiacs only popped up intermittently after that, with odd releases turning up at the most unexpected moments during the 80s and 90s. The timing of these bursts of creativity put them in the frame for each subsequent Psychedelic revival without them ever becoming completely involved. With a core line-up that featured Charles Taylor, John ‘Woody’ Wood and Duncan ‘Mad Dog’ Kerr, they kept a low profile and their distance a little from even the underground’s version of mainstream and instead worked privately on their own muse.

A long silence then followed but the, ahem, ’10s have seen both an EP and their second album (which came out in 2015, entitled “Exploding Universe”) arrive from the re-energised band. As part of this burst of wild activity (well in the Brainiac world at least) comes this new LP “Journey To X”. I suppose it more of less goes without saying, bearing in mind who we’re dealing with, but this is a weird, tuneful and wonderful trip through the Brainiac 5’s own private world. Much like catching “the little people” on the hop at an unguarded moment, it’s a vision of life viewed from a very strange angle indeed.

Being that this is the Brainiac 5, they mainly eschew the usual boy/girl love themes for songs concerning less traditional subject matters, such as mind control, prehistoric traditions and inappropriate obsessions. After the short, Television/Quicksilver Messenger Service-style “Endless River Part 1” (actually part of a song that featured on that 1978 EP and the recent “Another Splash Of Colour” compilation), we are into the lengthy, multi-part “The Human Scapegoat”. Beginning with riffy Glam Pop sound featuring a guitar that could have come straight off of a Suede album, we move through crashing, heads-down no nonsense Metal and then quiet chiming interludes before re-joining the joyous main theme. The next track “Laura Riding”, the tale of the writer Robert Graves psychic adviser, taps into the same queasy sound as early Roxy Music, before the more straightforward cool 60s pop of “At Noon”.

What I would imagine side two of the vinyl album begins with “The World Inside” which is apparently the nearest thing to an out and out love song – “Meeting someone you can trust with your darkest secrets”. In the tradition of each track being markedly different to what has gone before, this one is a Jazz Pop zinger with female vocals by Jesse Pie one. As always there are a few Psych touches in there but it still hits like a curveball from “out there” in the company it is keeping, but the song is utterly entrancing.

“Some Things” sees the 5 delve back into their Punk roots with some Wilko-like chugging guitar and the final song is another 10 minute plus opus which also has a little Pub Rock in it, but takes things to a different level by including some scathing guitar lines too. If Syd Barrett was in Eddie And The Hot Rods there’s a slight possibility that it might have come out sounding like this – which from my perspective is in no way a bad thing. The song details the story of something/one that “never existed” – could “Altered States Pub Rock” be the next big thing in 2017? Who knows but it works well here and brings the album to a fitting end.

Considering their 40 years plus history it is quite an achievement for them to have come out with something so fresh sounding and consistently intriguing in 2017. The Brainiac 5 occupy a unique if almost invisible position on the UK music scene and if “Journey To X” is any indication as to their sound long may they remain doing so, but having said that they do deserve a higher profile. I salute them but hope for some long overdue recognition!