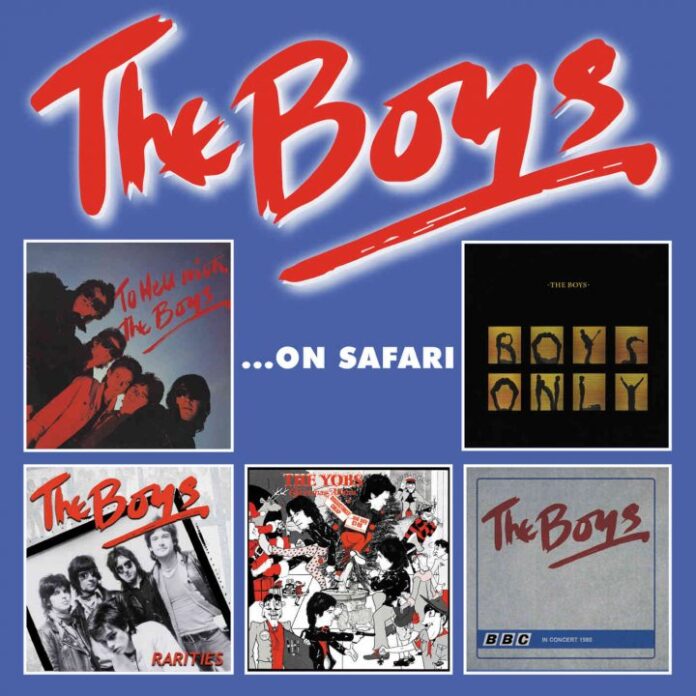 The Boys – The Boys On Safari 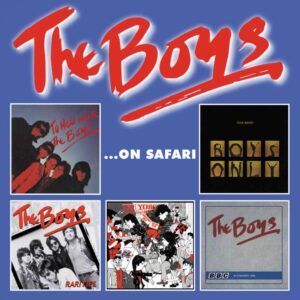 5CD set which includes the two albums To Hell With The Boys and Boys Only, plus the pseudonymous Yobs Christmas Album, a BBC live concert from 1980 and a rarities disc….LTW’s Ian Canty goes to hell and back…

After nearly hitting it big with their self-titled 1977 debut album and recording a very good second collection in Alternative Chartbusters, punk pop group the Boys moved from the NEMS label to Safari in 1979. This imprint, with an unusual roster that veered between the X-rated glam punk of Wayne County And The Electric Chairs, Glenn Hughes’ old school heavy rock and south coast mods the Teenbeats, is now chiefly remembered as being Toyah’s launchpad into the charts. But back in 1979 Safari was just another indie label trying to negotiate its way around the post punk fallout and in doing so giving homes to various waifs and strays.

The original Boys line up of ex-Hollywood Brat Casino Steel, Matt Dangerfield, Jack Black, Kid Reid and Honest John Plain was still in place and with new/wave power pop remaining a big deal in the UK and making inroads to the US at the time, they had every reason for cautious optimism. The band’s winning way with a good tune should have stood them in good stead as the 1980s neared, but perhaps two years into their career some could be excused for thinking they might have already missed the boat.

To Hell With The Boys was issued towards the end of 1979, their first LP for Safari and third in total. On this record the Boys come across as a slightly more mature band outfit, with the punk connections of the name and some of the wilder guitar flourishes being the only real throwbacks to more raucous times. It’s more a straight rock & roll record really and a good one too. The noisier tracks like the excellent Rue Morgue (one of their very best) and the No Fun-influenced See You Later are tempered with keyboards that are perhaps more at the forefront than before. It’s not really a bad thing though, as on the latter song of those two Casino does a lovely bit of organ work and he’s generally on great form throughout. Seeing as this was the last Boys album he would appear on in their original run, it seems entirely fitting that he gets to showcase his talents here.

Of the two singles from the LP Kamikaze is a doomed biker saga in a kind of “Shadow Morton gone new wave” mode. The other 7 incher Terminal Love coasts along in a dreamy, hazy manner that is truly memorable, a “sad ending/drugs death” disc, with a bit of Knocking On Heaven’s Door and a list of dead rockers thrown in near the end. These are the album versions, with the different singles cuts being included on the rarities disc. Elsewhere the fast and catchy Waiting For The Lady plays up to the “punk Beatles” tag the band were dubbed with on occasion and Bad Day boasts a fragrant waft of psychedelia/garage pop in its structure.

There’s hints of a Velvet Underground influence here and there on this LP and also of the Rolling Stones, in particular on You Can’t Hurt A Memory (which got its lyrical thrust from the similarly named Johnny Thunders song) and Lonely Cowboy. All this sets up for the emotional and moving finale of Independent Girl. To Hell With The Boys is a very solid LP that should have seen the Boys making up for lost time, but it wasn’t to be.

By the time the fourth Boys album Boys Only emerged, Casino Steel had left and for many fans he was an integral part of the group and much missed. It would have been a brave person who would have backed the band for the charts at this point in time, but despite their depleted ranks they were still more than capable of knocking out a winning tune. Appearing at the start of 1981, for a large part of this collection the Boys seemed to be reining in their natural flash a touch. They only really cut loose on the last three tunes, which happen to be the ones I enjoyed most of all. There isn’t anything really that wrong, but the Boys sound uncharacteristically a touch too modest, specifically on the first side of the original vinyl LP.

The musical palate had obviously shrunk a bit with Casino’s departure, with a chunky guitar attack providing the main musical thrust instead. Even without Steel Wrong Arm Of The Law perfectly captures the band’s Hollywood Brats lineage and Satisfaction Guaranteed is garnished with a Phil Spector “Wall Of Sound” type intro. The pacy Monotony is more in the old Boys style and those final three tracks really boost the momentum of Boys Only. Miss You, despite some daft lyrics, is freewheeling fast fun and a nicely chaotic Little White Lifeline a gem. An ode to pharmaceutical overindulgence, it is vital and exciting. The power pop smarts of final Boys’ single on Safari Let It Rain brings Boys Only to a conclusion. Whilst nothing is bad on this record, I feel the latter half is far more rewarding and proved at even this late stage in their career they had much to offer.

Disc three rounds up rarities from the Safari era, including eight previously unreleased tracks. The un-PC original title of Kamikaze Jap Junk lays bare the Velvets’ influence and in general the 1979 demos, though slightly more basic, have a lot of rough charm. I preferred the Original To Hell mixes to the final album takes, they just sound more vigorous and exciting. The compilers even reach back into 1978 when an early version of See You Later was taped for a projected third album on NEMS which never transpired.

Love In Pain and Schooldays musical provide a contrast, stripped back demos of just keys, acoustic guitars and voices. Walk My Dog feels like a lost Boys classic with plenty of drive and along with the song Jimmy Brown, which has nice ringing guitar sound, presumably could have made the Boys Only LP. Talking of which, there are five demos for that record which again sound really good. The ringing pop/rock of Little Runaround never made the cut, but sounds good. This disc ends with a couple of natty b sides Cool and Lucy.

The Boys had masqueraded as the Yobs every festive season from 1977 onward and the fair reception to these jokey punked-up carols encouraged Safari to schedule an album of them in 1980. It’s an odd experience listening to a Christmas album in the last knockings of summer, something that perhaps will sound better in three months’ time after a surfeit of mulled wine and egg nog. This is in its essence a more throwaway selection, but does have some fun moments, along with offensively puerile ones. But then again, that seems to have been the intention from the outset. There’s pretty neat synth spoof in Jingle Bells and the Pistols-style Auld Lang Syne is well done too. They also bung in a couple of originals which are entertaining enough, with Another Christmas being a sharp look at the downside of yuletide. This disc ends on a suitably bizarre note with a Stars On 45 medley of the Yobs songs welded to a handclapping disco beat.

The final disc here is a 10 song set that was recorded on 13th February 1980 for broadcast on the BBC In Concert radio show. Previously released around 20 years back on on the same disc as a Vibrators’ gig from 1977, this is a slightly fuller version with the Boys’ cover of r&b standard You Better Move On included, one which was missing from the original issue. The gig has the expected decent sound and a good selection of the band’s material from those first three albums and associated singles. The Boys sound in good form here after supporting the Ramones on a UK tour had tuned them up for this gig. Of course their classic Brickfield Nights shows up and they dip into the Yobs’ songbook for the Worm Song too. This selection ends with a cracking version of old favourite Livin’ In The City and the whole set rocks (to coin a phrase).

The Boys On Safari is a satisfyingly thorough look at the band’s archive from 1979 to 1981, bringing together rare and familiar material in a detailed and logical way. Plenty of attention to details that the fans will really appreciate. The two albums are presented as released, leaving the rarities disc to mop everything else up, which probably is the best method for these type of sets. The Boys can count themselves a little unlucky never to cross over to the national charts during their stay at Safari, but it wasn’t for the want of trying or indeed talent.

The two Boys albums included here have plenty to recommend about them with To Hell… being the stronger of the pair. The live set picks up some earlier Boys highpoints and documents a good performance by the band and the rarities disc is pleasingly thorough. Some of the demos included top the versions that were eventually released and the various single sides included give a feeling completeness. Speaking of completeness, the Yobs album had to be included in a full set of Safari recordings and is probably best saving for the point on 24 December when you have imbibed sufficiently. With sleeve notes from band mainstay Matt Dangerfield addressing every song, The Boys On Safari provides everything you need to know and hear from the band after their stint at NEMS, a time when the work they put in deserved success that was sadly not forthcoming.