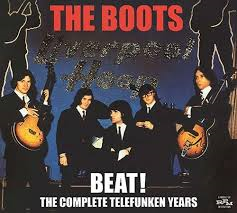 2CD set which rounds up all the early recordings of West Berlin R ‘n’ B kingpins the Boots….LTW’s Ian Canty finds out what was going on musically in Germany’s divided city during the 1960s

Of course the history of Beat music in the 1960s is inextricably tied to West Germany, with the Beatles stint at the Star Club in Hamburg being the highest profile link. But how about a band like the Boots in West Berlin, stuck out on a limb in the middle of Soviet controlled East Germany with very few routes back to the West? Well, thanks to the thriving counterculture there, they did pretty well. Foregoing the smoothness of the more pop elements of the Fab Four et al, they sought sustenance from the UK’s tough Rhythm and Blues outfits like the Pretty Things, the Stones and particularly Belfast’s Van Morrison-fronted Them. Beginning in 1965 they put out the stunning single “Gaby” a year later which more or less beat those bands at their own game; ironically for a group which mainly interpreted outside material, this self-penned effort was their very best. During the course of this collection we see a total change of musical direction, but we’ll come to that later….

Their first album, “Here Are The Boots”, is somewhat typical of times; drawing on mainly Blues and Soul cover versions, but with a tonne of enthusiasm and energy making up for the lack of original songs. Having keyboards set them a little apart from some their influences and added a “US Garage” edge for that coming wave in 1966. Certainly wild (in fact on their first single, a reading of “But You Never Do It, Babe”, the bass player clearly loses the tune and indeed the plot halfway through, but it does make this version exciting and makes it stand out from the pack), the Boots could on occasion pull off a more tender ballad such as “I Remember When I Loved Her”, but they generally sounded much happier kicking the living daylights out of something like “Mama Keep Your Big Mouth Shut”. They do put their own stamp on things though, managing to make garage band staple “Gloria” somehow into a wild jangle fest, complete with wobbly fuzz and effects and as far as pure attack is concerned, the Boots had few rivals.

This first disc includes the associated single sides from 1966 and oddities. By this time the Boots had ditched their much hated dark suits that featured on the front of the album and were sporting more “Mod” style threads, showing the changing times. As well as the mighty “Gaby” there are versions of “In The Midnight Hour” and “Watch Your Step” plus their only recording in their native tongue (“Aber Ich Blieb Kuhl”). Though low on numbers that you won’t have heard before, the Boots imbue them with their own personal finesse which makes for a very rough but pleasing effect.

Like many bands of that era a turnover of personnel (particularly the change of vocalist from Werner Krabbe to Jacques Eckhard) and changing fashions meant that their 1967 follow up LP to “Here Are The Boots” bore little comparison sonically to the debut. “Beat With The Boots” didn’t do exactly what it said on the tin: the band had forsaken their Blues obsessions for a more modern Soul influence by now and “Beat” was just a distant memory. Also their record company influence had decreed that a songwriter called Sanford Alexander was to be imposed on them, authoring four of the songs on the record. A much less rough and ready recording process meant that the Boots struggled to put their own slant on things and Alexander’s hyper commercial, almost middle of the road input doesn’t help. The songs are not unpleasant but the manic energy of “Here Are The Boots” is nowhere to be seen. The covers have a little more vim though, “Barefootin'” being powered along by a driving brass section, the Hammond organ coming into play nicely on a downbeat “Comin’ Home” and a really good version of “Out Of Sight”.

“Beat With The Boots” is perfectly serviceable and danceable 60s Pop Soul, but anyone looking for a continuation of the previous work might well be flummoxed. For the bonus tracks on this disc though we’re right back to the Boots ramshackle and raucous early days, with “live” (or doctored studio takes with added on audience noise) recordings from “Live At The Liverpool” compilations, where they rubbed shoulders with Screaming Lord Sutch and his Savages, amongst others. This is the band back to their driving, no-holds barred best, treating cover versions with a hard but fair doing over.

“Here Are The Boots” if you can forget the lack of original material, is an excellent LP of fiendishly chaotic proto-Garage Punk and the bonus tracks including the 1966 singles where they hit peak form, are uniformly excellent. Buy this collection for that great debut and you get the rather less consistent and energetic, but still enjoyable “Beat With The Boots” too. Very much a “win-win” situation for any fans of 60s tough Garage and smooth Soul.