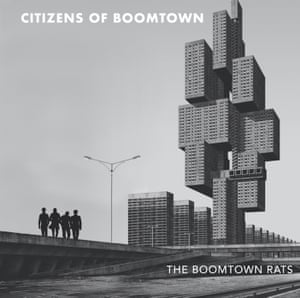 Geldof and crew with a most unlikely early album of the year contender. Joe Whyte reviews.

With it being something like thirty-plus years since the last Boomtown Rats studio album, this has been, if not hotly anticipated, a record that a lot of people were probably not that bothered about. The Rats have been pretty much excised from the history of punk rock (a bit like The Stranglers were for a fair old time) and their late seventies/early eighties heyday is seen through the prism of Live Aid, Geldof’s later celebrity status and an almost daily presence in the gutter press following the tragic events that haunted him for years.

This ignores a few long-lost facts; firstly, The Boomtown Rats were one of the biggest selling and most popular bands of the original punk wave (again a bit like The Stranglers) and were loved by provincial youth as much as The Pistols and Clash for (albeit) a short time. Secondly, they were an absolutely solid-gold singles band; those speed-thrill R&B-influenced seven-inchers that had elements of The Pretty Things, the early Stones and Them in among the buzzsaw punk and Geldof’s sneering lyrics were totally of, and in the moment. Thirdly, as a live band (they were the third real-i.e. not a local- band I saw after the Stranglers and The Clash) they were peerless and Geldof as a frontman was often untouchably enigmatic.

This last point was, in part, their downfall; the music press of the time initially loved Geldof before turning on this motor-mouthed, opinionated and often arrogant figure as was the way back then. Build ’em up and knock ’em down, the next sucker will be along shortly. The band’s moves into reggae-tinged tracks, calypso-styled singles (the much derided Banana Republic for one) and the chart friendly (as well as lyrically literary) stuff such as Rat Trap and I Don’t Like Mondays saw the press and the original fan base move away from the band and despite the hits, they saw diminishing 80’s returns as the decade wore on. It’s seems odd to me that the Rats modus of lengthy story-songs was so derided latterly; Graham Parker (and to a lesser extent, Costello) seem to have maintained a cult following for a similar type of writing. Geldof was clearly inspired by early Springsteen, lets get that straight; he’s not quite in that same league, obviously, but it seems that a lot of the regard for the clever songsmithery of The Rats has been lost in the mists of time.

A solo career of debatable success and of course the well-documented Band Aid/Live Aid phenomenon came next as well as Geldof’s autobiography, Is That It?, which is actually a real page turner and a great account of the early London punk scene as well as The Rats formation and Geldof’s early days in Dun Laoghaire in Ireland. You all know the tragic later story which I wont reiterate here.

In more recent times, an appearance at the premiere punk festival in the world (Rebellion in Blackpool) saw a reformed and reinvigorated Boomtown Rats play a set that had a huge amount of the old fire in it. That day is remembered, however, for Geldof berating the assembled vintage punks for their lack of sartorial elegance and for “wearing shit black t-shirts with shit bands on them while I’m up here in a gold suit and snakeskin boots” (I paraphrase, it was words to that effect) which saw the majority of the Rebellion massive throw a massive huff-and lots of pints- all of which seemed to me to be the “punkiest” thing that happened that weekend. A guy onstage pointing out the herd mentality of an audience? That remind you of anything, folks? Anyway, it seems that this audience-baiting schtick is now part of the Rats show and Geldof adapts it for whoever they are playing in front of to great effect. 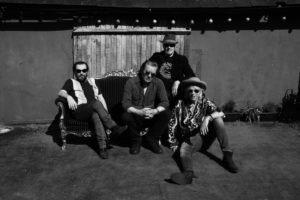 This new album is released in a silver sleeve and gold vinyl and that is completely apt as it leaps out of the speakers and demands your attention. If you’re after the Rats of old, this is probably not the place to look although the fizz and vim and the absolute pissed-off-ness of it will remind many of the good old days. Opener and single Trash Glam, Baby has a large slice of Mott The Hoople in its glittering grooves and the swaggering Sweet Thing manages to lift hooks and riffs from about a dozen other songs and still sound fresh, original and modern. The little bit of Bowie-backing vocal that’s been lifted from “Let’s Dance” is a case in point although I’m sure David the Dame lifted it from something else that currently escapes me. Both of these tracks have garage rock at their Nuggets-alike core and the Farfisa organ trilling through Sweet Thing is a great little touch.

She Said No  is another bouncy, ebullient track with Geldof giving it the big-I-am braggadocio, with tongue firmly in cheek throughout. The band are the original line-up minus Messrs Fingers and Cott and they sound like they’re having a whale of a time throughout these ten tracks; there’s little fat on the bones, there are hooks and choruses and middle eights that lend themselves to repeated listening and as I mentioned in the header, this (along with Wire’s Mind Hive) is currently an early album of the year contender for me.

The acoustic led Here’s a Postcard and the cheeky K.I.S.S. sit mid-album and are probably the poppiest things herein; the latter in particular has a playful, almost rhumba groove about it and has a rap section down towards the end although I’m not sure who it is as it’s uncredited on the record and the PR bumf.

The production on the album is also worth mentioning- it’s quite simply huge and lends these songs a gravitas that suits them very well. The drum sound in particular is gargantuan and reminds me a little of Achtung Baby era U2, but don’t let that put you off.

The two tracks that end the album are probably the most contentious; Get A Grip is a strutting electro bouncer and the closing The Boomtown Rats is another tongue in cheek four-to-the-floor shuddering, dancefloor banger that sounds like Utah Saints playing a Depeche Mode song and is all the better for it.

This is an album that will divide opinion, no doubt about it (if you want another view, read The Guardian’s review….) but I think it’s a real return to form and a surprise package that will delight as many as it annoys. I like it a lot.

All words by Joe Whyte