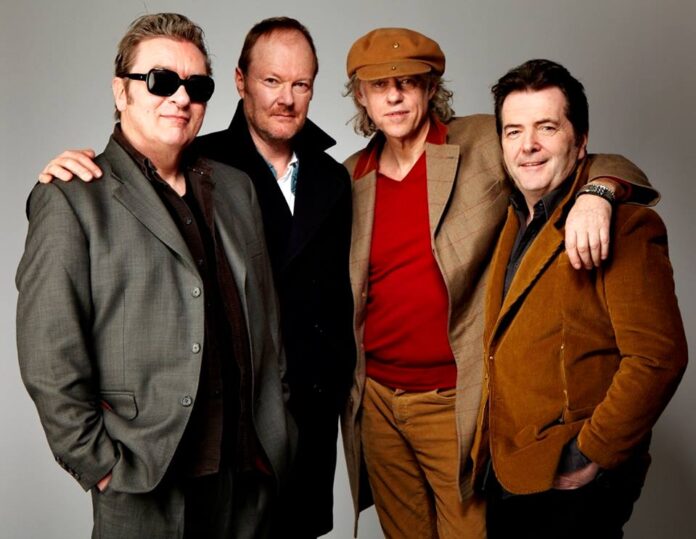 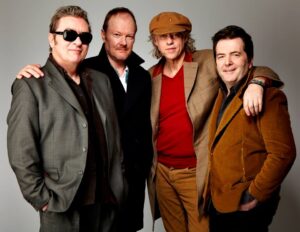 … and the lesson today is how to die! Harry Mulligan reviews The Boomtown Rats.

It’s as much of a reality check for me seeing The Boomtown Rats at the ABC O2, in Glasgow, as it can be. It’s been thirty eight years. It’s been thirty nine years since Britain’s notorious winter of discontent, and the time when the Labour government imposed a maximum three day working week under Sunny Jim Callaghan, the Labour Premier.

The Strikes were endless and came one after the other, sometimes several at once. We were home in 1976 for just under a year to bury my dad’s mother, Granny Mulligan – The Last of The Roaring Rafferty’s. Our adopted home was in Portland , Oregon, and after a brief interlude in Boston, Mass, had finally settled there. I returned to Scotland with the sound of Dark Side Of The Moon ringing in my ears. My new/old classmates called had nicknamed me Flink Poyd , sarcastically. They brandished singles of The Clash’s Tommy Gun around menacingly,  like they were as hot as a pistol. Luckily for me, I didn’t have to endure the British socio-economic misery long and was back in time for The Portland Trailblazers winning the NBA. That, and The Boomtown Rats Fine Art of Surfacing Tour when it reached  The Paramount …

The Show was electrifying, almost as good as Thin Lizzy & Queen at the same venue. Bob Geldof was a real live wire at that age and turned venue into a sweaty, sexy cauldron of nubile teenage American girls, much to my delight. Backstage after the gig, staged by pals at Double Tee & Albatross, wasn’t I bemused to find Bob lolling about in a broom cupboard with a big blonde darling. I was learning from a Master! We all sat around on the backstage floor rolling what seemed to be no less than an ounce of Columbian!

Less than two years later, Mondo Bongo – the fourth album was released in North America, and of course, I intended to be there to see it toured and promoted. However, the gig was cancelled for reasons I am still unaware of.  There was gnashing of teeth aplenty. Thirty eight years later and there have been a multitude of casualties, and I have always felt disappointed to have never seen the band again. The Fine Art Of Surfacing wasn’t off the turntable for a good year.

It is kind of surreal to be seeing them again, and the first three Rats albums have always easily slotted into my Top Ten punk albums of all times. However, thirty eight years later and it’s sort of out of context – or is it? Totalitarian Marxism is dead and The Conservatives have blatantly stacked the deck with Old Etonians.

Inside the ABC 02 in Glasgow, there are lovelies with pink hair and porcelain skin, and a fair mixture of drunken, aged punks, windmilling their arms about. I had a similar experience recently at a Big Country gig at The Fourth Road Bridge Fifty Year Anniversary Party in Edinburgh. I watched them thinking “Who are these old farts?”, and without Stuart Adamson, who is dead, they were dismal. I cannot imagine The Boomtown Rats even attempting to play without Bob. They have more class than that.

They bound onto the stage, and I’m a little taken aback. Ofnbcourse everyone is older, but they take the stage like Pierpoint, the last hangman coming into the cell for The Long Drop! Sir Bob, as we are loath to call him after his foray into the Ragged Trousered Philanthropy of Live Aid, at least has his sense of humor intact. He is wearing a kitsch fake snakeskin suit from back in the day.

“ I dunno if I can still do these songs!”

he says to the audience and sort of shrugs. Its honest. I have an immediate sense that Bob & The Rats need to do this. It’s imperative and this is their as well as our cathartic process. For me it’s a loose end from that cancelled show in Portland, and after waiting nearly forty years, by Christ, I’m not missing it …

The first few bars of I Never Loved Eva Braun resonate and I wait for the laudable prompt – Is she really going out with Adolf? … and there it is! I sigh and think, “Finally!”, smiling. Next there is the familiar Tick Tock Tick Tock … mouthed mechanically before they launch into Like Clockwork, from The Fine Art Of Surfacing. None of the angst is missing. Geldof still taps into the primordial bedrock that made them the angry darlings of the New Wave.

The next song I notice, There’s Always Someone Looking at You and I’m back there. I  listen for Geldof’s scathing wit: “…don’t flatter yourself, nobody’s listening”. His facial cues and body language are full of gesticulation and expression. He tells the Glasgow crowd:

“Thanks for coming out to see us in all our ragged Fuck Off glory!”

The band lolz into, Banana Republic. This is one of the songs from Mondo Bongo. It’s a reggae vibe from the ska years, and it melts into Many Rivers To Cross. Then there’s the punchy Tonic For The Troops … the title track from the second album.  She’s just a mocking bird … The song stops and suddenly we can hear Pete Briquette, generally on bass, or sax, playing the piano intro to Don’t Like Mondays:

“And the silicone chip inside her head, gets switched to overload …”

My own mind is racing between the events of years ago when the girl Shot The Whole Day Down outside that school in San Diego. I realize its a Monday in Glasgow. There seems to be an elephant in the room and no one is talking about it except Bob himself, and he is doing so tacitly. Then there it is right in front of me:

“And the lesson today is how to die…!” He sings.

He stops the band suddenly.  I can feel a huge lump in my throat and I’m looking at Bob, his arms outstretched and pleading with his audience. The air is filled with pathos. How many people are thinking of Paula Yates walking around with Michael Hutchence, the INXS singers ashes hidden in a silk pillow in Clouds House Rehab? How many people are thinking of Paula dying? How many are thinking of young Peaches Geldof dying? Who knows? My eyes are brimmed full of tears as I look at the apparent anguish on Bob’s face. Shit! he’s been through a lot. The moment is pregnant with poignancy and meaning.

I re-focus on Bob. He is prolonging the moment deliberately and there has been an odd drunken heckler with little sensitivity nor cognitive function. The pause is almost excruciating. I holler out We Love You, so he hears me above everyone else. I could hear a pin drop, and seemingly, Geldof draws the band back in as if on cue, launching back into the remainder of the song. The moment has passed and maybe I have read too much into it, but for me it was intense. However, its my belief that Geldof’s pain is real. Art imitates life in my book.

The rest of the show is upbeat with Close As It’s Ever Been and an excellent rendition of Lady On The Fourth Floor.

Do you know what time it is? Bob asks the crowd.

It’s John Lee Hooker time, he answers. Then it’s I Don’t Wanna Be Like You which has a great Garry Roberts solo. None of the band has lost their chops. Indeed Simon Crowe even configures his tom toms on the kit as he did all those years ago with big to small rather than the other way around.

Geldof talks plenty to the audience throughout. His self-deprecating humour is laudable as he talks about and laughs at his fake snakeskin suit that he has had to return to Boomtown (Glasgow) to locate. It’s not a dig at Glasgow’s fashion sense, it’s a laugh at, and laugh with, the kitsch aesthetic of the eighties.

Rat Trap is the song that encapsulates the Boomtown Rats. It speaks to the boy within me that struggled through that winter of discontent, puberty and the culture shock of being back in tawdry Kirkintilloch, Scotland after the sunny climes of the Pacific Northwest. I think of burying my Granny Mulligan and I look down at Riagan Cook standing beside me fresh from working her fingers to the bone as a carer just that day. I smile at her, the new generation of kids that we, the punk movement, made it possible for them to colour their hair and pierce their lips lip like its normal. I wonder contemplatively: Has anything changed?

…  and then I hear familiar words:

“Deep down in her pocket, she finds 50p, hey is that any way for a young girl to be? I’m gonna get out of school, work in some factory, work all the hours God gave me, and get myself a little easy money …”

Photo gallery of Bob and The Rats at Lincoln by idp. All words by idp. More work by idp can be found in his Louder Than War archive. His photography website is here and his photo blog is here.