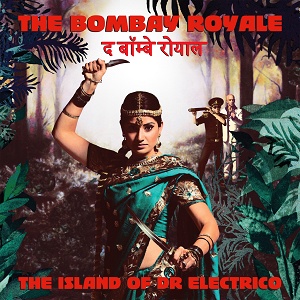 Following up 2012s You Me Bullets Love was never going to be easy. An album that obtains number 1 on the iTunes World Music Charts has to have something about it. Its mix of vintage Bollywood together with surf, rock and disco was intriguing and clever. Never disappointing in an album of superb musicianship and inspiring segues of 60s and 70s soundtracks blended with the sounds of today.

Based in Melbourne, The Bombay Royale are (currently) an eleven piece ensemble containing a wicked horn section which exudes life throughout the group’s sound. Fronted by Parvyn Kaur Singh, the daughter of shabad singer Dya Singh, and Shourav Bhattacharya a second generation Indian-Australian computer whizz, they present twelve tracks which create a varied musical backdrop.

As with their debut album, The Island Of Dr Electrico could, and should, front a movie. Seemingly interweaving all the tracks into an adventure on the land of the mad doctor and reciting a tale of love, hate and power, it is surprising and often borders on the amusing.

Take the video to single Henna Henna which contains heroine, hero and evil leader all in one. It’s almost comedic approach compliments the wild and commanding sound, racing along to a ‘to be continued’ finale.

Don’t let the Bollywood tag deter you, there’s enough modern influences in here to satisfy any music interest. Khubsoorat Bewafa bears uncanny resemblances to Blondie’s Rapture which must be intentional and demonstrates skill in converting the sound to one of their own.

Hooghly Night Patrol and (Give Me Back My) Bunty Bunty have funkiness in abundance, and together with the title track it includes some embryonic space age synth effects which only adds to the charm. The Bombay Twist is complete madness.

The Bombay Royale have done it again, and it was no easy task. Even with the slightly misguided album finale The River, musical director Andy Williamson has assembled another dazzling collection from your new favourite surf / spy/ spaghetti / disco / funk / pop Bollywood band.