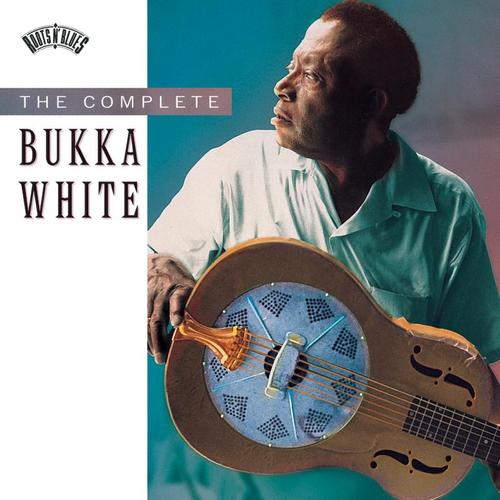 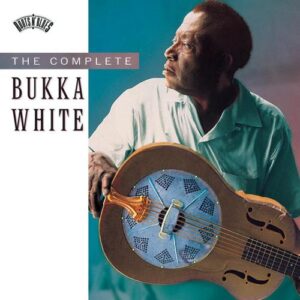 The Blues Poetry Of Bukka White

Bukka White is one of the legends of the delta blues. Frank Bangay looks back on his career.

Sometimes the blues suffers from stereotyping but listening to different blues artists and hearing what they are singing about you learn that there are many different musical styles in the blues, many distinctive songwriters, and many fine poets. When I interviewed Kevin Coyne in 2004 he told me that the blues has many fine artists; and it’s hard to pick the best. The blues reflects the environment that these artists were coming from, also their personal experiences. These experiences often reflect the experiences of other Afro American people from those times.

Sometimes blues artists also sang spiritual songs, concerned with the path we tread to get to heaven. One of the many fine blues songwriters and musicians is Bukka White. Back in the 1990s I heard a friend play a tape of a Bukka White recording and I liked what I heard. later I acquired The Complete Bukka White. I was attracted to the record by the front cover. This showed a dignified looking Bukka White wearing a white shirt and holding a steel guitar. When I got home and played the record. I realised that it was the same record that my friend had played for me.

Bukka White was born in 1909 either in Aberdeen or Huston Mississippi. His full name is Booker T. Washington White. Bukka  came from a misspelling on one of his early recordings. He was a first cousin to blues guitar legend B.B. King. His father worked on the railways, and was an accomplished musician and he taught Bukka how to play the guitar. His mother was the daughter of a preacher, fond of playing hymns. At the age of nine Bukka received his first guitar. Along with family influences Bukka was influenced by blues artists like harmonica player George ‘Bullet’ Williams and acclaimed blues artist Charlie Patton. Bukka worked as a field hand by day, at night he played in juke joints and at parties. He also spent some time travelling around on trains looking for work opportunities. In 1930 his recording career started. He recorded both blues and gospel songs. His gospel recordings were in the style of some of Blind Willie Johnson’s recordings, with a woman singer accentuating the last phrase of each line. He made these recordings under the name Washington White. At this time he also played semi professional baseball and fought in professional boxing matches.

In 1937 Bukka travelled up to Chicago where he did some recording. The two sides recorded were Pinebluff, Arkansas and Shake Em On Down. The recordings featured Bukka on his own playing a steel guitar. They were soulfull performances. After this Bukka travel back down south. He got ambushed and in defence he shot his attacker in the hip. He spent three years in the Mississippi Penitentiary also known as Parchman Farm. While there he was recorded by folklorist Jack Lomax. In later years Bukka played down the harshness of his prison experiences. This is in contrast to fellow blues artist, Robert Pete Williams, who found his prison experiences to be extremely tough. However when Bukka White said that he wasn’t lashed, you realise the harshness of the conditions in these places. While he was in prison, the single Pinebluf Arkansas/ Shake Em On Down became a hit. In 1940 Bukka returned to Chicago to record again.

It is said that when Bukka returned he was playing covers of popular songs of the time. The producer wasn’t impressed. However he paid for Bukka to spend two nights in a hotel to come up with some new songs. When Bukka returned to the studio, the results were most impressive. It has been speculated that he might have written some of the songs while he was in prison. But whatever the case may be, it still remains an impressive achievement. The album starts off with both sides of the previously mentioned hit single. Then we go into the 1940 recordings. As well as his steel guitar Bukka is accompanied by Washboard Sam on percussion and washboard, an instrument that would during the following decade make an impact in Brittan, as part of the skiffle movement, probably the first time British audiences were exposed to the blues. His prison experiences are sung about in two songs. In When Can I Change My Clothes Bukka sings about the prison uniform. He wonders when he will be able to get back into his civilian clothes again. Inside the booklet there is a picture of Bukka in prison with a shaved head. The other song is Parchman Farm Blues.

Fixing To Die is a song Bukka wrote after watching his mother die. This song looks death in the face. Bukka’s mother also appears in Strange Place Blues. Here we find him by his mother’s graveside wishing he could see her again. Sleepy Man Blues is a song about depression. In the lyrics Bukka sings “when a man gets trouble in his mind, he wants to sleep all the time”. However he knows deep inside that he can’t, he has to face the day.  District Attorney Blues shows how the district attorney is no friend of the poor. High Fever Blues while dealing with sickness is also a love song with similarities to the Little Willie John song Fever, made famous by Peggy Lee. Like the title suggests Good Gin Blues is sung in praise of good gin. Bukka’s guitar playing often with the use of a slide is very rhythmic echoing the railways that his father worked on, and the trains that he used to travel around on while looking for work. All this is portrayed very well on the closing track Bukka’s Special Streamline.

After this album Bukka retired from music, only performing on special occasions. He did however in 1948 help his cousin B. B. King gets his music career started. During the 1950s Bukkas retirement continued. In the early 1960s a new audience started listening to his music. Bob Dylan recorded Fixing To Die on his first album. Folk guitarist John Faye tracked Bukka down and along with Skip James and Son House, Bukka was brought back to the music world.  He started performing again, playing at folk and blues festivals, he also toured Britain where he took an interest in the latest fashions. The back cover of this CD shows him onstage wearing a ruffled silk shirt a medallion  and a pair of jeans. Towards the end of the decade Bukka recorded for Blue Horizon, the top British blues label of the time that promoted many British blues artists.

Bukka carried on performing until 1977 when he died from cancer. However he left behind some inspired recordings, and for those who saw him live, some fond memories. Along with his contemporaries he showed that blues lyrics can have great depth to them and cover a wide range of topics.

Essential reading, The Legacy Of The Blues by Samuel Charters. In this book written during the early 1970s Samuel Charters interviews Bukka White, the previously mentioned Robert Pete Williams and a number of other blues artists. In doing so he puts the blues in a contemporary context.

Bukka White’s legacy is remembered each year with a festival in his honour in Aberdeen, Mississippi. The festival is on Facebook.

All words by Frank Bangay. More writing by Frank on Louder Than War can be found at his author’s archive.