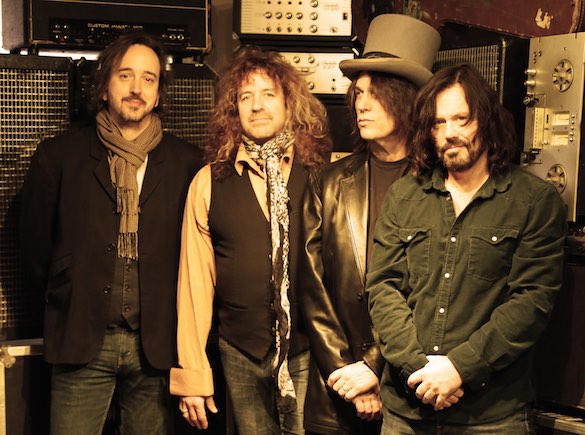 All hailing from Nashville, the band is composed of Joe Blanton on lead vocals and guitars, Warner Hodges on lead guitar, Dan Baird on bass (and occasional lead vocals) and Brad Pemberton on drums. The Bluefields can be considered as a kind supergroup as all the members have had their own successful spell in bands : Baird and Hodges both play in Homemade Sin, Blanton used to front Royal Court Of China and Pemberton has played drums for Ryan Adams and currently tours with Brendan Benson.

The Boston Arms is located just outside Tufnell Park Tube Station. The Music Room has its entrance on the side of the pub and has its own seperate bar area . When I arrived opening act The David Sinclair Four were already playing. The band reminded a little of Tom Petty And The Heartbreakers when they are at their bluesiest. They have a really really good lead guitar player and seem to be playing live quite a lot round London so make sure you catch them. You could see some Bluefields members walking round the venue during their set. Warner Hodges, the incarnation of cool was sporting a set of cowboy boots (with spurs) and seemed to attract every girl in the room like a magnet !!!

After setting up their instruments, the band came on stage and after a short lull due to a fault in Blanton’s monitors, proceeded to play a 2 hour set of sweaty rock’n’roll. The band’s set featured songs from their recently released Under High Cotton LP but their first two albums Ramshackle and Pure weren’t forgotten. Highlights of the night were Trainwreck (a Whiskey-in-the-Jar-ish rocker) sung by Blanton but written by Hodges and Belong, another great ballad from the Dan Baird songbook. The band were as tight as ever with Hodges displaying his usual vista on guitar and Baird and Pemberton would have made Cliff Williams and Phil Rudd proud (especially on the cover of AC DC’s own Down Payment Blues). The chemistry between the band members was evident with Hodges, Blanton and Baird exchanging jokes during the whole gig.

The Bluefields UK tour still has a couple of dates. Make sure you go and see them if they play near (or far) from you!