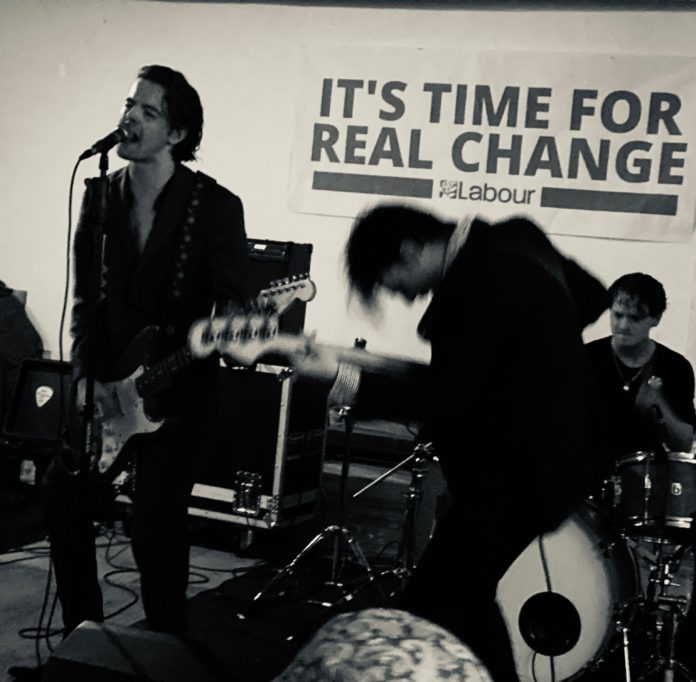 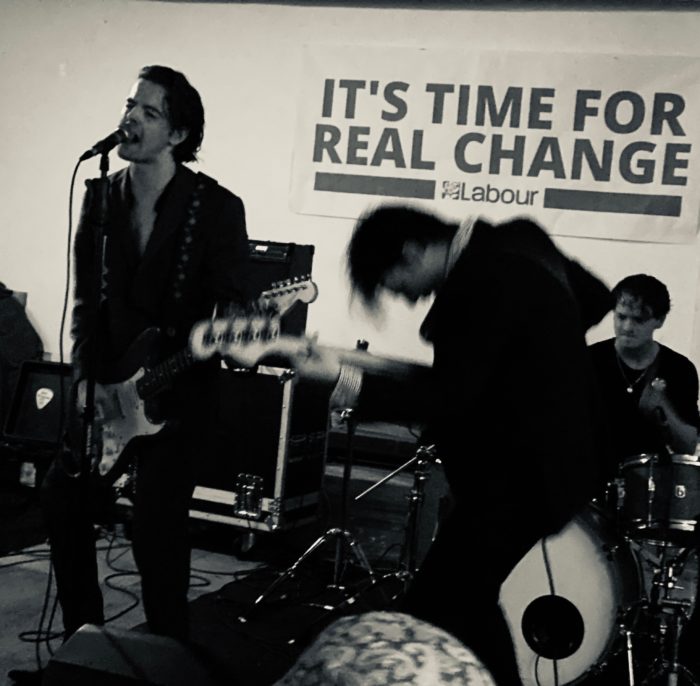 The Blinders have been rallying support and raising funds for Labour with their For The Many tour. Milly Whyles caught up with them in Lincoln.

In such a small city it’s rare to find a local alternative scene as lively as Lincoln’s. A gig at the local labour club takes punk back to its DIY roots – no frills or fancy lighting, just music and a feeling of complete togetherness in the experience. The venue is cosy, to say the least, draped with red curtains ( à la labour theming) and with a small stage at the back of the room dominated by a few massive amps.

The first to play were bluesy guitar duo Broken Crown – their set included a cover of Sinatra’s Fly Me To The Moon juxtaposed quite violently with a song about whiskey-induced murder. This was followed by Gary Rudd, with just his guitar and harmonica, singing a clear socialist message in support of the evening’s cause. It’s worth noting the sheer range of music amongst the supports – directly after Rudd’s set came explosive indie rock girl band Mary’s Dream who, despite their youth, demonstrated songwriting that felt experienced and fun. A highlight was definitely a bass-heavy cover of Come Together by the Beatles. Next to take on the stage were multi-genre fusion four-piece Pagans S.O.H (shepherds of humanity), with frontman Marcus donning a “jezza is a pagan” t-shirt. They tore up the stage with a truly unique style which can’t really be placed in a box. Whatever it can be classified as their set was a romp through off-the-wall rap with hard hitting rock sounds behind it – definitely a band to be watched! As the final support, alternative-indie homecoming heroes The Rills returned from London back to their roots in Lincoln. Their early arctic monkeys influenced rough musical charm was thoroughly enjoyed as the atmosphere rose in excitement before The Blinders’ set.

Between the supports and The Blinders, local labour candidate Karen Lee gave her campaign speech met with cheers of support. This was followed by the raffle announcements (only in Lincoln can you put a raffle in the middle of an alternative gig!).

The Blinders themselves seemed to appear on stage out of nowhere – there was no need for introductions as they plunged straight into Gotta Get Through, a thrashing warmup for the crowd. The pure noise of this band cannot be underestimated (my ears are still ringing a little bit), especially standing so close to the speakers. Matt Neale’s drums are visceral and harsh, his concentrated skill is completely unparalleled in power. A personal favourite of mine, “L’etat C’est Moi”, came next and saw the introduction of a 100-strong mosh pit to the apocalyptic tones of vocalist/guitarist Tom Haywood’s ominous chants “I am the state, subjects all you are”.

The band effortlessly and darkly caricatures today’s political mess with lyrics that only increase in relevance over time. Their clear political anger was further exemplified with the rousing spoken-word piece Free The Slave. Their anger echoed in the crowd, in chorus, ending the song on a bitter “who the fuck would want that” before the swirling, dark atmosphere was cut through with Can’t Breathe Blues. Starting at intense speed before melting into a brutal slowed breakdown, I hung onto every word and every note – the lyrics are crucial to the atmosphere of The Blinders’ music. They see no need to cover their thoughts with fruitful metaphors, instead speaking their minds regardless of the inherent brutality of the subject matter (“hands on the ground if you know what’s really best / or I’ll get you in a chokehold and squeeze your pretty neck”).

Earlier track Ramona Flowers was a swaggering highlight accompanied by bassist Charlie McGough’s undeniable stage presence. Haywood made a bitter introduction to Brave New World, pointing out the ever increasing relevance of its biting and political lyrics. This could be my lack of experience talking, but up until this gig I have never seen a group dance the can-can in a mosh pit – this appeared to be the perfect occasion to do so. Their usually apocalyptic tone picked up into one of hope during Rat In a Cage (“come together / we need each other”), however, this being The Blinders, it was not without the ominous, building chants of “they’re gonna build a Berlin Wall” before the pit again descended into as much chaos as it’s small size could manage. Their set ended on the short but intense “Et Tu”, inducing that primal feeling that comes with the spirit of punk music, followed by a longer (but intense all the same) Brutus. They ended their set so suddenly I hardly realised it was over – a brief “thank you” from Haywood and they simply walked off stage to the cheers of the crowd. The Blinders seem to deliver regardless of circumstance and regardless of venue. It’s hard to believe that in somewhere so small and intimate they are a totally relentless powerhouse. The atmosphere in the room was primal and immediate – an irreplaceable experience.

Words by Milly Whyles, you can see more of her writing here at her author profile.