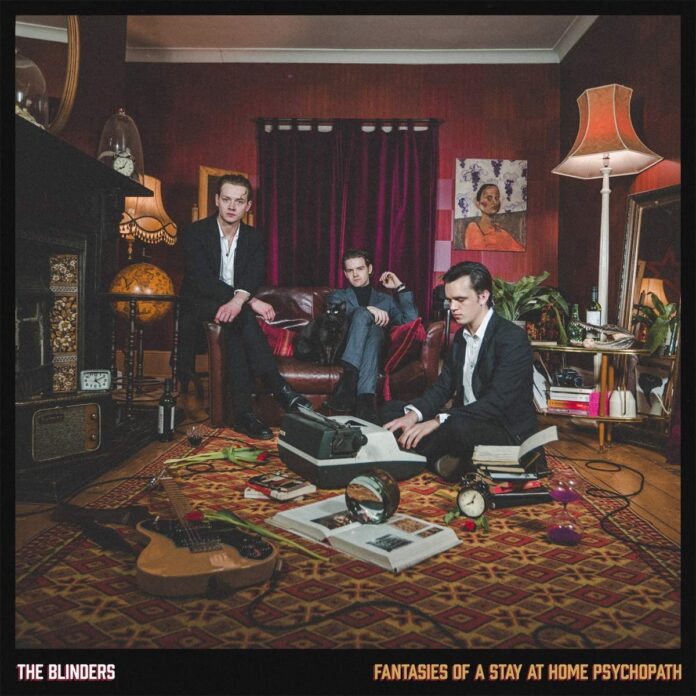 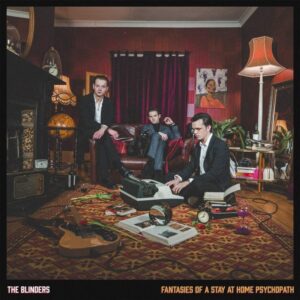 The Blinders: Fantasies of a Stay at Home Psychopath

The delayed second album from The Blinders, Fantasies of a Stay at Home Psychopath, finally sees the light of day as lockdown eases and the psychopaths finally come out to play again

I first received an email about The Blinders new album, Fantasies of a Stay at Home Psychopath, in February. A full month before any mention of lockdown or the Stay Home/Stay Safe soundbites. An interesting observation if nothing else. The album was originally due to see the light of day in May but was pushed back due to the state of the world, during which time psychopaths and the rest of us were all staying at home and fantasising about the end of the crisis. I don’t know about anyone else, but I was having some pretty weird dreams (nightmares?) during this time. I hope that doesn’t mean… (Note to self – must re-read that John Ronson book)

Well anyway. If you are one of those who have been desperately waiting for this new record from The Blinders, I’ll re-assure you now, the wait has been worth it. On initial listen I’d say that perhaps Fantasies is not as immediate as Columbia, but that isn’t a bad thing. This is a grower, and as such it surrounds and engulfs you, it has you noticing different little nuances and subtleties with each listen, you end up focussing on the lyrical couplets and analysing the messages behind the songs. It is definitely, and defiantly, a thought-provoking album.

Before you listen to a note, it only takes a cursory glance to suggest where some of the influences come. Ray Bradbury in the album’s title track. Paraphrasing Dylan Thomas in Rage at the Dying of the Light. And then there are the biblical references scattered through the song titles too. 40 days and 40 nights and From Nothing to Abundance. This is a band that puts a lot of thought into their songs, start to listen to the lyrics and the references continue from the classics (Edgar Allen Poe) to pop culture – “if not for Bowie, who’d know about the Norfolk Broads” (Circle Song)

Opening with the sinister title track, which sounds like a blend of The Doors/Nick Cave & The Bad Seeds and Arctic Monkeys, The Blinders set out their world view and it is not one that fills you with hope for the world. Painting their pictures with words and setting things off in a dark light. At only 22, he has said “all he needs to say” while overhearing others “sordid wicked views”. The something wicked isn’t the eerie carnival tale as set out by Bradbury, this is real life good and evil. The rise of those with extreme beliefs, the increasing gap between the have’s and have nots. A storming introduction and a warning that this isn’t an album of sweetness and light.

The pace lifts on Forty Days and Forty Nights, displaying a frantic Pixies-esque dramatic thrashing melody with equally frenzied pounding drum line. As the song fades, the intro to Lunatic (With a Loaded Gun) takes its lead from Placebo, before their unabated ire is unleashed and the target appears to be (a) power-tripping megalomaniac world leader(s).

I make no apologies for the references to other bands here. They are meant in a positive manner. Regardless of what I hear at first, all of these songs have an unabashed confidence, they are undoubtedly The Blinders through and through. But just to continue this referencing, Circle Song comes across like a Beatles/John Lennon anthem for the 21st Century.

I Want Gold luxuriantly takes us to the mind-point of the album and the late-night jazz club feel of Interlude. Its understated brushed drums and piano overlaid with a spoken word track questioning the life and behaviour of the character in the album title.

Then the brooding Mule Track bursts into life, referencing Lucifer for the second time on the album and channelling the spirit of Cracking Up era Jesus and Mary Chain. Cheery song subjects continue, death taking centre stage as Rage at the Dying of the Light takes over and reveals itself as one of the album highlights. This band are certainly not going to go gently as From Nothing to Abundance displays, follows its predecessor in and ensuring that the album continues to go out with a bang not a whimper, reaching a furious crescendo.

Penultimate track Black Glass takes the tempo back down to the minimum. A fragile ominous hum developing initially into a pulsating rhythm before ultimately building to a fearsome climactic fracas. The last quarter of the album is phenomenal. The frenzied build up to the climax of Black Glass is tempered by the fragile beauty of the final song.

Album closer, In This Decade, is a low-key slow burner which evokes the spirit of Dylan (Bob this time, not Thomas), at times Thomas Haywood’s vocal takes on an almost Neil Diamond-like timbre. This sorrowful lament takes its lead from the messages in the title track. It displays an air of despair for the future referencing Edgar Allen Poe “there’s a raven at my windowsill, there’s a raven at my door”, while revealing a wistful longing to be elsewhere “I wish that the cars hissing by my window were the sea lapping at the shore”. An epic outro.

Who knows what tomorrow will bring? For now, Fantasies of a Stay at Home Psychopath is an essential document and soundtrack for these quite frankly dystopian times.