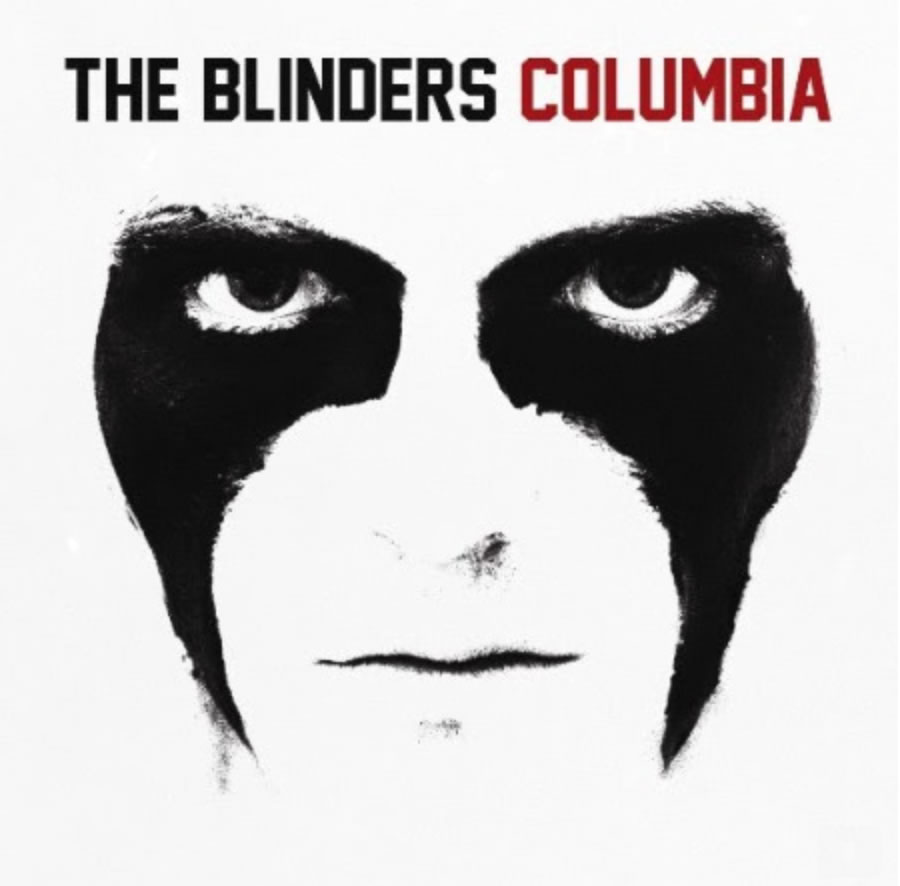 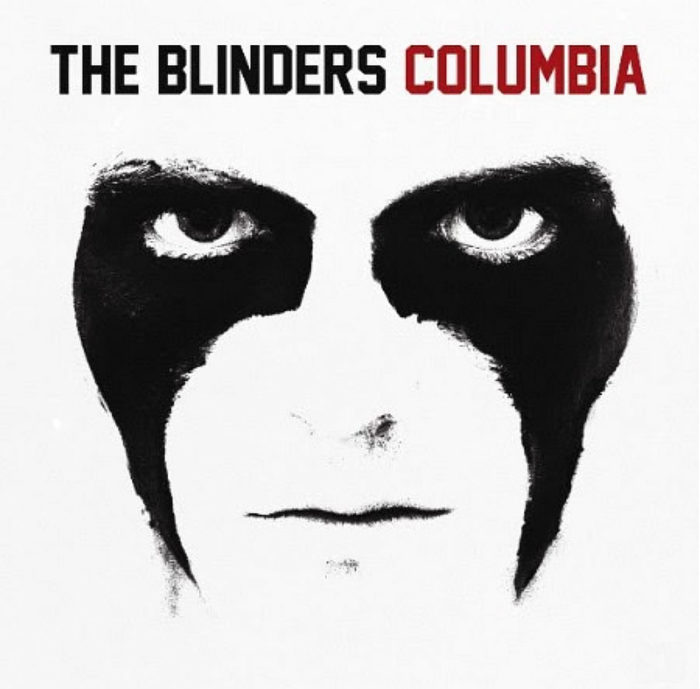 We finally get to hear The Blinders debut album Columbia, with a bun fight at Louder Than War as to who was going to review it! Nigel Carr reports for Louder Than War with additional photos by David Gleave.

We covered The Blinders’ first ‘Manchester’ gig back in March ’16 at The Kings Arms, Salford. It was a low-key affair to 25 or so astonished onlookers and the band has been a constant on LTW’s radar ever since.

Columbia, their debut album finally drops on September 21st. After non-stop gigging, honing their craft, this band of diligent, Doncaster wannabees finally get to release the record they wanted. Now signed to Modern Sky, they have been holed up with producer, the ‘Wizard of Wolverhampton’, Gavin Monaghan at his Magic Garden studios.

This is an album drenched in post-modern individualism, steeped in sixty years of rock ‘n roll from Dick Dale’s surf guitar through Beatles & Stones, Beat Poet Americana, Orwell and Huxley, whose dystopian vision is a thematic and lyrical inspiration. Electric live, the band shows us how to have a good time despite the leopard print jackboot of modern politics trying to grind us into the dirt.

Delivering the message loud and clear, Columbia, a euphemism for this rotten state, this septic isle. Out of touch politicians lead by a robotic, granny dancing parasite fucking with our future for their own personal gain.

From Gotta Get Through, a rallying cry for a blank and jilted generation, echoing the tribal vibrations of Who Is America? soundtracked by Northern Cree. A wake-up call for a disenfranchised youth. The prodigious frontman, Tom Heywood ‘magpie-ing’ McCartney’s breathless A Day In The Life pant through the repeated ‘gotta get through, gotta stay alive’.

The Blinders, humble and honest; the singer hides behind black daubed eye-slap to deliver the sermon of alter ego, Johnny Dream in the most gut-wrenching, visceral and ferocious way. Often slumped in a post-gig come-down, emotionally drained, every performance charged by a driving energy, a louche swagger, stoked by an unshakable belief, creating a thunderous shockwave of emotion through his audiences.

Gotta Get Through careers into L’ etat C’est Moi, ‘the state is me’ with its repeated, rapacious, breathless refrain ‘I’ve got divine right, I’ve got divine right’. Delivered live, it whips up audiences into an unprecedented frenzy; the feeling captured perfectly by Monaghan and the band in the studio.

Hate Song and Where No Man Comes slow the pace whilst maintaining punch and emotion, before Free The Slave, a Charlie McGough poem. It’s been in the set from the early days, affirming the band’s explosive political lyricism and Heywood’s proclivity for theatre. ICB Blues, perhaps the oldest song on this album deals with the death of Eric Garner in police captivity to a punching Barrett’esqe beat.

As we approach the 70th anniversary of the writing of Orwell’s 1984, the startling centrepiece to an album which cannot be categorised by simple genre breaks into the acoustic Ballad Of Winston Smith. Never played live, it’s a gentle lull in an otherwise bomb-blast of an album that builds to a deafening close.

This power trio, this band of very modern troubadours, this enlightened youth, deliver an album so explosive, so perfect, it defies any attempt at categorisation. There are odd time signatures, indefinite song structures but the tracks ebb and flow beautifully. Take the segue from Winston Smith to Et Tu which melds into Brutus, the massive crowd favourite and a concept in itself, creating a staggering nine minutes of explosive power.

It closes with the Stones’ influenced Rat In A Cage’ with its repeated harmonising cry, ‘Come Together’, and Orbit (Salmon Of Alaska), giving the listener the chance to calm down!

Columbia as an album is a single piece of art as a concept. Listen, track by track, join up the dots, get the message loud and clear – England is indeed dreaming.

You can pre-order Columbia here

The Blinders will be out on the road promoting the album on the following dates: 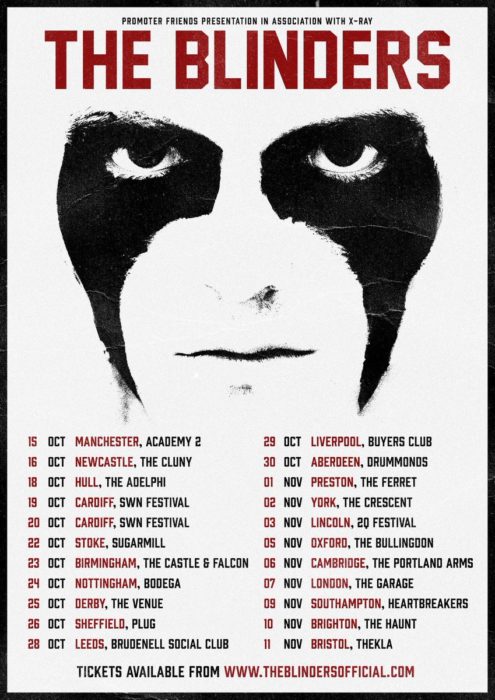 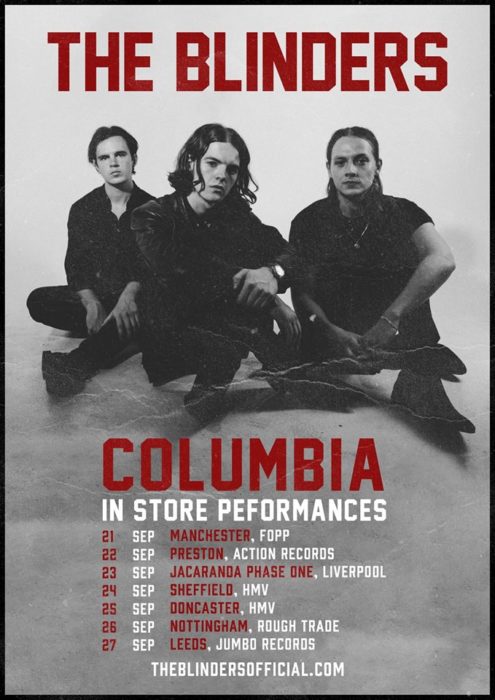 Additional photos by David Gleave. More of Dave’s photos on Louder Than War can be found here. He’s also on Flickr and his personal website is  davidgleavephoto.com