It’s almost hard to believe now, but U2 had a concrete reputation as the chameleons of rock music – no album would be the same, and the Dublin four-piece were constantly striving for new ground, new identities and albums that shifted musical gears. The hardest of these transitions also proved, arguably, to be their last – released twenty years ago, the simply-titled Pop was U2’s last big risk, a decadent and dark beast that almost blew the band apart. Sam Lambeth revisits the record.

By the mid-nineties, U2 didn’t have much to prove – they’d already reinvented stadium rock several times over, not least with the double-fisted Achtung Baby and Zooropa. However, Bono and co saw it as their duty, as one of the world’s biggest bands, to once again hit the regenerate button. With every new record came a mammoth world tour, and this would be where the group would make their first mistake – allowing their manager to book the dates from April 1997 meant U2 had put themselves on a tight schedule before they’d barely begun.

Ideas and fragments began to form around 1995, when the band’s modus operandi for Pop was laid out – the sonic textures and adventurous soundscapes that shaped their previous two records were going to be embellished, with The Edge in particular keen to dismantle his reputation for echo-heavy guitar riffs. Bono, too, wanted his previously theatrical, trembling tenor – as immortalised in torch songs such as With Or Without You – to be replaced with a nervous, raw register. All of these came to fruition – The Edge’s heavily-processed guitar melodies often sounded more like a pneumatic drill, while Bono often sounded like he was leaving a series of frantic voicemails, his rasp at the very front of the mix.

Musically and thematically, the band followed in the footsteps of R.E.M.’s grimy, slippery Monster by making a record of the night – one that took the pure format of pop and warped it, taking in the hedonism, happiness and eventual anguish of a night of bacchanalian abandon. Bono later commented that the record sounded like a dream turning into a nightmare, reflecting the track sequence. 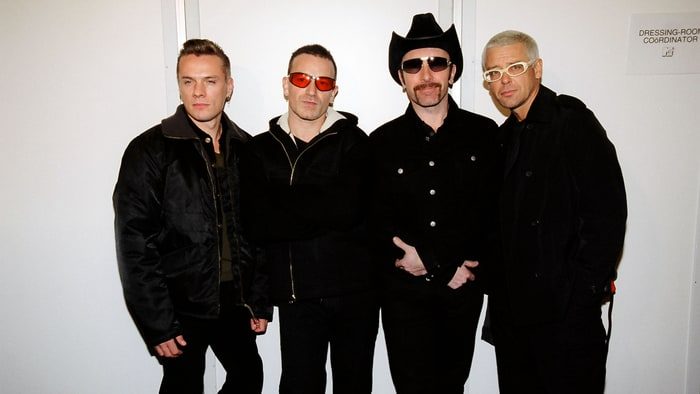 Another trait U2 took from R.E.M. was a newfound sense of irony, which is laced throughout the lead single Discotheque. A processed acoustic guitar bleeds into one of The Edge’s most metallic guitar riffs, while the empty spaces of the song were filled with erratic loops, pounding synths and Larry Mullen Jr’s industrial drumming. At five minutes long, it encapsulates the ecstasy-fuelled highs and gritty comedowns of a club hop, from Bono’s detached yawn of “you just can’t get enough of that lovie dovie stuff” to The Edge’s lounge guitar breakdown. Its equally frantic video, which saw U2 dress as The Village People aside various snippets of nightlife, was both bold and bizarre.

“It was important we got the brightly coloured wrapping right, as what lies beneath is not so sweet,” was how Bono viewed the subtextual Pop, but in truth he and the rest of the band weren’t so sure they’d got it right. While the group were eager to experiment with loops and different methods of playing, it meant they quickly ran out of time to finish tracks, while the picket line of producers meant there was a dangerous case of too many cooks. By Christmas 1996, the band weren’t still finished, with a world tour scheduled only a few months away.

Pop represents a unique part of U2’s eclectic back catalogue, for it represents a struggle, a fight and the fact they had to bleed a little to make it (something R.E.M. would later experience with Up). Bono, in particular, was having trouble finishing lyrics, and ironically only nailed the chorus to the trad-rock strut of Last Night On Earth on the final night of recording.

The electronic loops are prominent in the first half of the record, particularly the quasi-ambient Do You Feel Loved, which meshes acid house grooves with The Edge’s buzzsaw guitar, and the elegiac, if slightly incestual, Mofo. The only real moments of traditional U2 are in the sombre reflection on The Troubles, Please, where The Edge dusts off on his echo-riddled riffs, and the consumerism swipe that is ‘If God Will Send His Angels’, where Bono laments “it’s the blind leading the blond” and “the high street never looked so low” over a familiar guitar chime.

Pop gave the band positive reviews, but they didn’t last – their attempt to reinvent pop music for a generation raised on wry apathy hadn’t quite worked, but they were lauded for their guts to try. After this, though, U2 would stick to playing it safe – 2000’s All That You Can’t Leave Behind was a return to their roots, and only the mild experimentation of 2009’s No Line On the Horizon has hinted they’ll ever try anything as bold, brave and fierce as Pop again.

This year, U2 will celebrate the 30th anniversary of their seminal record The Joshua Tree with a world tour. Whether they will give Pop the same attention remains to be seen, but as a last bastion of restless creativity, it’s a record that was ahead of its time.