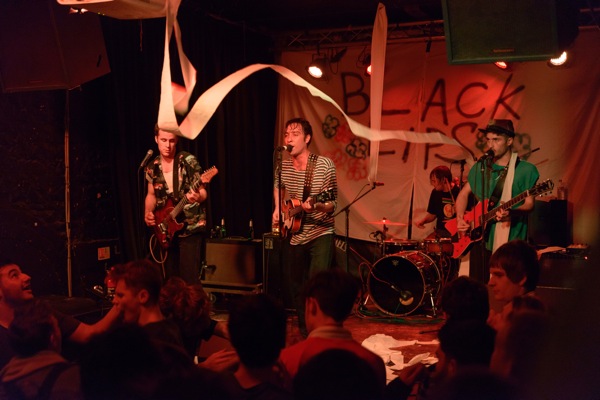 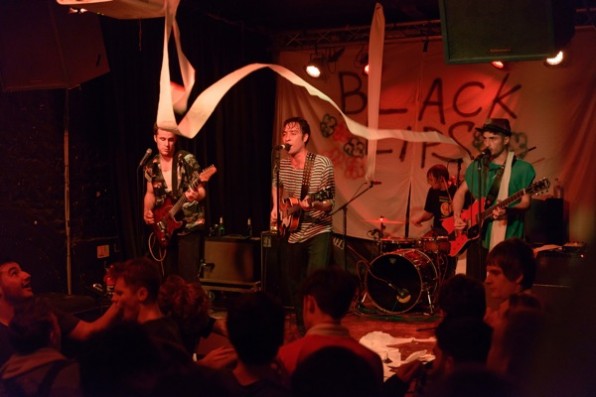 Two phenomenal live bands erupt on to the Cluny’s stage this evening and give everyone a lesson in how to destroy a venue. Louder Than War’s Lee Hammond is taken aback by the amazing atmosphere The Black Lips create.

In a world of mediocrity, the norm and sometimes a band comes along that throws convention out of the window, tonight sees one of the sleaziest rock and roll bands in the world roll into Newcastle. The Black Lips have never been one for convention and thank the lord that tonight is no different, first up though the equally sleazy Plague Vendor.

A band that take us completely by surprise, bursting on to the stage with such a furore we’re on the back foot from the off. There’s a blistering pace to the early part of the set, well-crafted Californian punk lead singer Brandon croons over his mic stand hanging out into the crowd. The crowd lap up his every move as he scales the balcony, on his return to the stage as Brandon’s persona changes.

As he retakes the stage he becomes a young Jack White, he yelps and croons like the great man himself. We’re taken aback by this change his whole demeanour and delivery, has altered into a man possessed by a god of sleazy rock and roll. The band pump out some awesome driving rhythms and we cannot help but get our groove on to this phenomenal change in this set.

Alas its over all too soon, we’re left wanting so much more at the same time as wondering whether or not The Black Lips can match this unbelievable set. The Black Lips take to the stage in emphatic form, opening up with the particularly sleazy Sea of Blasphemy as they howl there way through the crowd feed off the bands energy as they pogo around the venue.

The band is quite clearly in incredibly high spirits, as guitarist Jack bounds around the stage like a coiled spring. With a demonic look in his eyes whenever he approaches the mic. As old favourite Katrina rings out through the venue there’s a mess of bodies in front of the stage as everyone goes wild, again we’re left aghast at the power both bands have over the audience this evening.

Provoking an equally wild reaction is Drugs; tonight is The Black Lips at their absolute best. They’re bounding all over the stage feeding off the audiences sheer excitement at having them back in Newcastle. Not content with causing a mess of bodies in the crowd the band take to throwing copious amounts of bog roll into the crowd adding to the phenomenal atmosphere.

Tonight is a lesson in how to completely tear apart a venue, by the time the band get to the awesome Raw Meat. People are clambering on to the stage and throwing themselves into the heaving thrum below, its an awesome sight atmospheres like this are seldom seen anywhere now. However, this evening is a complete exception to the rule, The Black Lips banished mediocrity and completely blows every single person in this room away.

Arguably one of the most energetic ramshackle gigs of the year from two of the best live bands around right now.