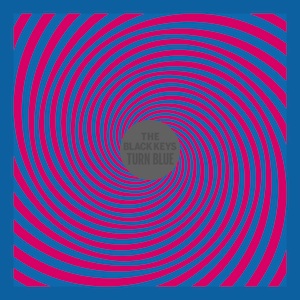 Twelve years ago, when Dan Auerbach and Patrick Carney released The Big Come Up, they were just two guys playing retro garage blues touring the US and UK toilet circuits.  Now in 2014 the Black Keys are on their eighth album, Auerbach is fast approaching guitar hero status and they’re headlining this summer’s Latitude Festival.  2011’s El Camino saw the band explode well and truly into the mainstream and deliver a string of chart-topping singles so one can’t help but wonder how drastically the success will have affected their sound.

Dangermouse is still behind the controls as he has been since Attack & Release (2008) and while there are no big blues riffs like that album’s I Got Mine – and the trashy garage days of Thickfreakness and Rubber Factory are long gone – this is most definitely a Black Keys album.

Weight Of Love introduces Turn Blue with a dreamy landscape of acoustic guitar, glockenspiel and musical saw.  It feels like quite a muted fanfare for the album, that is until Carney lays down the beat and Auerbach interjects with a phenomenal guitar solo that’s all drama and anguish.  Not quite Maggot Brain but it’s not far off.  “You’ll be on my mind/ Don’t give yourself away to the weight of love” pleads Auerbach in the chorus before the track descends into lush Pink Floyd textures and David Gilmour himself is channeled on another vocal and expressive solo. Weight Of Love rises and falls exquisitely over its six and half minutes and comes to an oddly sinister end with a riff that sounds like Black Sabbath playing surf pop.  It’s the perfect start to the album and one of the best songs the band has ever recorded.

In Time begins with a piano riff lifted straight out of 60s Motown and Auerbach’s soulful falsetto croon does nothing to take away from the feeling that this could be a lost cut from What’s Going On. It settles into a funky groove before (whisper it) a brassy synth appears out of nowhere for a more modern chorus.  The title track carries on the soulful vibes whilst lead single Fever is a bit like Lonely Boy part two but not as good; all the elements are there but it doesn’t excite in the same way.

Year In Review features some tight and incredibly funky drumming from Carney and a John Barry-esq string arrangement underneath a particularly distressed Auerbach: “Why you always want to love the ones who hurt you/ Then break down when they go and desert you/ It’s so hard to let them go”.

The acoustic guitar comes out again for Bullet In The Brain, as do the Pink Floyd comparisons.  The first minute sounds a hell of a lot like Breathe with Auerbach once again tapping into the spirit of David Gilmour and his trademark slow, bluesy guitar bends.  And then it’s all change; the guitar is layered with various synth sounds and Carney kicks the tempo up a gear.  “Bullet in the brain/ I prefer them to remain the same”, Auerbach could be singing directly to all the fans who mourn the death of the raw, minimalistic band they once were.

Yet, in the next breath, we’re back to the Black Keys of old as Carney lays down some thumping, tribal rhythms for It’s Up To You Now and Auerbach proves he hasn’t taken the Big Muff off his pedalboard just yet.  It’s a definite highlight, drenched in fuzzy guitar hooks and propelled by Carney’s reliable, solid playing.  Halfway through the band knock it down to half time and Auerbach dishes up one of the dirtiest, sexiest grooves he’s ever committed to record.

Waiting On Words sees Auerbach employ his slightly unusual but soulful higher register (as heard on Never Gonna Give You Up) for one of the album’s more romantic, wistful numbers: “Well goodbye, I heard you were leaving/ Won’t try changing your mind/ Goodbye, don’t know where you’re going/ The only thing I really know my love for you is real”.

The disco bassline and electronically-enhanced drums of 10 Lovers is quite a big departure for the band but somehow Dangermouse makes it work for them.  In Our Prime’ is the Black Keys back on familiar territory with a slow burning blues ballad. The song begins with a mournful piano and lazy shuffle.  “Pour me down the drain, I disappear/ Like every honest thing I used to hear”, sings Auerbach.  The band then swap the shuffle for a faster beat and the song builds towards an impassioned chorus: “Like every lover hovers in my mind/ We made our mark when we were in our prime/ The house it burned but nothing there was mine/ We had it all when we were in our prime”. The whole thing climaxes with a ferocious guitar solo and some heavy Bonham-inspired rhythms.

Album closer Gotta Get Away is all classic rock riffs and country slide solos and comes over like The Hold Steady playing early 70s Bowie.  With its simple lyric (“I went from San Berdoo to Kalamazoo/ Just to get away from you”) and three minute length it feels like the most throwaway of all the Black Keys’ output yet sounds like the band having the most fun they’ve ever had.  It’s a light-hearted and raucous end to probably their most sombre record to date.

Turn Blue is a different Black Keys than we’ve heard before.  It’s an overall more soulful album which moves away from the band’s reliance on big riffs and traditional blues tropes to focus instead on good songwriting.  Dangermouse has helped the band vary their textures and timbres whilst retaining the sonic quality that fans have loved since the beginning.  It’s not the band’s most immediate album and might take a few listens but persistence will be heavily rewarded.  Dan and Patrick, you’ve done it again.

All words by Ben Tansey, find his Louder Than War archive here.