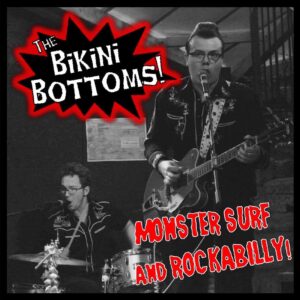 Glaswegian surf duo put the mental in instrumental. The album title says it all. Joe Whyte gets to the beach party.

Weird how music gets to your ears sometimes. I’d replied to an ad on Facebook Marketplace in which a guy was selling a set of Stratocaster machine heads which led to us chatting online and eventually meeting up to do the deal, as it were.

We’d ended up talking about Rockabilly (he had a set of tuners from a Gretsch, for sale too) and it turns out he’s in a band that play surf-trash rockabilly and had just released a debut mini album. That band are The Bikini Bottoms and the EP is a hellzapoppin’, reverb-drenched, twang-fest of tremelo and trouble and is a huge amount of fun.

Taking their cues from Link Wray, Dick Dale and the like, the five tracks are a delicious antidote to the serious business of the 21st century and are just what we need in these dark times. Anyway, who doesn’t need sub-three minute, breakneck speed songs about girls, cars, surfing, monsters and trains?

Jack “Kahuna Laguna” Elfick plays guitar and hollers and Ewan K “Atomic Flounder” Lake beats the crap out of his drum kit and does a bit of hollerin’ himself; the album is self-produced and self-released (in very limited quantities of 50- I’ve got number Lucky 13….) and its lo-fi growl suits the material very well indeed.

Bikini Bottom Boogie opens proceedings and is an slap-back echo-swamped surf (almost) instrumental which recalls old standard Pipeline,  both the Chantays original and Johnny Thunders later version. Elfick gives it big licks on his Bigsby tremelo arm and one can hear the reverb tank of his amplifier rattling and clanging. With cymbal splashes and Lake’s spare, precision drumming, this is a glorious return to 50’s B-movie heaven. As Elfick drawls “Ten hours later” in the breakdown, the song picks up and reprises itself in all it’s smokin’ garage glory.

Wet Legs And Skinny Jeans blazes in like a dragster snorting flames. The rolling riff and slapping snare cracks are enlivened by Elfick’s hiccuping vocals and scorching lead runs. It pauses briefly for breath then kicks back in with a twanging glissando and a searing solo. It’s a twisted love song and is gleefully boisterous. Similarly, Frankenstein Twist is a rockabilly horror dance craze song not unlike Vince Ripper and the Rodent Show’s recent stuff. With vocals mining an Eddie Cochrane vibe and a chopping, sleazy riff, it bleeds exuberance. As the two players exchange vocals, the chorus of “All the cool kids, flipping the switch, doing the Frankenstein Twist” leaps out of the speakers like a hot-wired zombie doing the Watusi.

Those Trains Ain’t Mine has some spare Sun Records dampened riffing interspersed with chiming chords. The solo is pure Brian Setzer (that’s a compliment, by the way) and the duet vocals add a neat touch. It’s not experimental, it’s not the latest new thing, but hell, The Bikini Bottoms are a whole lot of good time wrapped up in quiffs and western shirts. Surf’s up!

All words by Joe Whyte. Find more from him in his author archive.