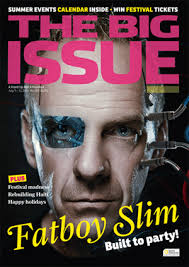 Keith Mullin, the lead guitarist in The Farm/The Justice Collective/The Peace Collective, and Dan Haggis, drummer from The Wombats have joined others this week in helping promote The Big Issue in the North.  This comes as part of an event called “The Big Sell”, and international event raising awareness of homelessness and will help raise funds for the International Network of Street Papers (INSP), which supports over 114 street papers worldwide.

Keith Mullin is joining a seller in #Liverpool outside Central Station from 1pm today, and will sell papers alongside him, as have all the other people involved this week.

Who else is joining in Vendor Week Big Sell

Dan Haggis – Drummer in The Wombats