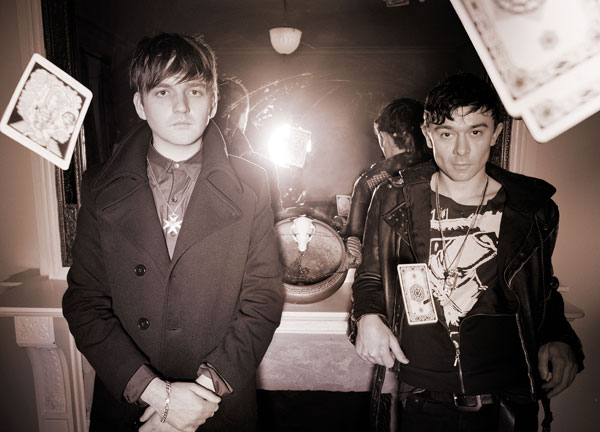 Lucy Holt doesn’t appear to spend a great deal of time NOT at gigs, and we’re all the more grateful for it. Here’s her take on The Big Pink at Manchester Academy 3 on Thursday.

Nicki Minaj turned up at one the most glamorous music event of the year ”â€œ The Grammys ”â€œ dressed as a nun and escorted by an anonymous guy dressed as the Pope. Her single ”ËœThese Girls Fall Like Dominoes’ unashamedly samples The Big Pink‘s biggest hit and perpetual provoker of their “one hit wonder” tag. In the same week, and in altogether humbler and less grandiose settings, The Big Pink played Manchester Academy 3. Is anyone feeling a little cheated?

The Big Pink’s less than papal accomplices were 2:54; a London-based band primarily consisting of some sisters and some misery. Frontwoman Colette Thurlow provided howling vocals that were just a little bit Karen O on top of reverb-drenched pop. ”ËœScarlet’ was a dusty, pulsating grunge number, and the ghostly ”ËœWait/Awake’ was a sort of gloom-ridden The Horrors. The four-piece acted as a musical sedative and depressant in preparation for the headliner’s wired stimulant of a set.

The set in question was backed by indecipherable projector images which cycled and frenzied in time to the music like a migraine, or a hallucinogenic acid trip (so I’m told). This, combined with music from the band’s more Dubstep influenced second album Future This, sort-of segues and a repetitive song formula gave the whole show a slightly nightclub feel (so I’m also told) that felt a little out of place in a grim hollow in Manchester University’s Student Union building filled with static and critical one-time fans.

”ËœVelvet’ from the debut album A Brief History of Love and its resident deputy hit single next to the universal ubiquity of ”ËœDominoes’ stirred up some enthusiasm in the crowd but surprisingly it was the new singles that got the warmest reception. The metallic sounding, extra-terrestrial anthem ”ËœStay Gold’ and current single ”ËœHit The Ground (Superman)’ – a rare sing along moment in their set of incessant distortion – proved that they still have more to offer.

The bane and holy grail of their existence, their ‘Creep’, ”ËœDominoes’ had been remixed within an inch of its life, perhaps an act to distance themselves as far away as Minaj as possible, or perhaps after three years of playing the same song they just got a bored of it. Robbie and Milo, the two pillars at the centre of the revolving door that is The Big Pink, were accompanied by a new drummer and a guy playing the MacBook (probably the tech guy) to orchestrate the button-pushing and dial-sliding.

”ËœThe Palace’ was a prime example of expert iJamming on the part of band/IT department. As the nearest thing The Big Pink come to a ballad, the spaced out melody was injected with fingernails down a blackboard screeches. ”ËœRubbernecking’, arguably the most tuneful pop song of the new album was accompanied by a hip-hop beat, and something called a “drop”, which threatens to corrupt everything the indiesphere holds sacred. Meanwhile an epileptic fit-inducing strobe light show accompanied and fulfilled the command of ”ËœLose Your Mind’, a jagged Kraftwerk style climax.

Whatever the reason for the less-than-riotous crowd reaction – maybe the dubstepping fell a little flat on an audience made to wait three years, perhaps people were disappointed by the lack of pop-diva cameo – it can’t have been due to the quality of the music, which was innovative and pretty brave for a supposed guitar band. Maybe they shouldn’t have let the initial NME hype lose momentum, but if it took that long to make an album like Future This then maybe it was worth it.