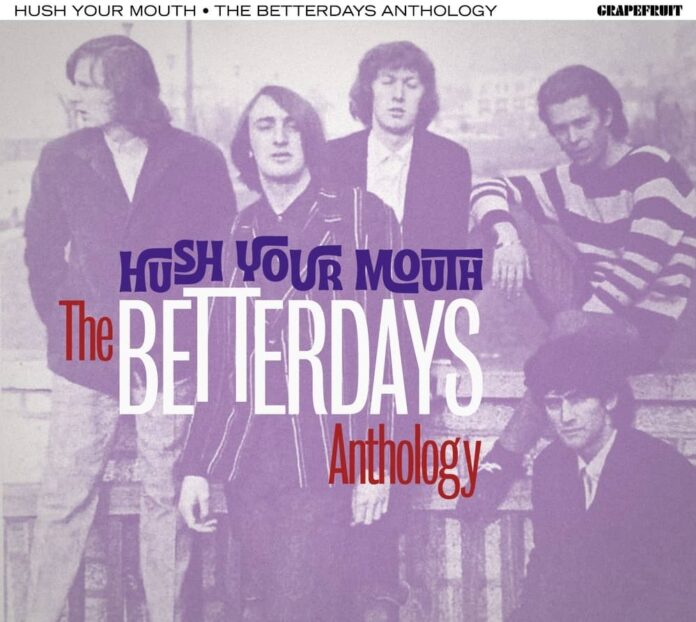 The Betterdays – Hush Your Mouth 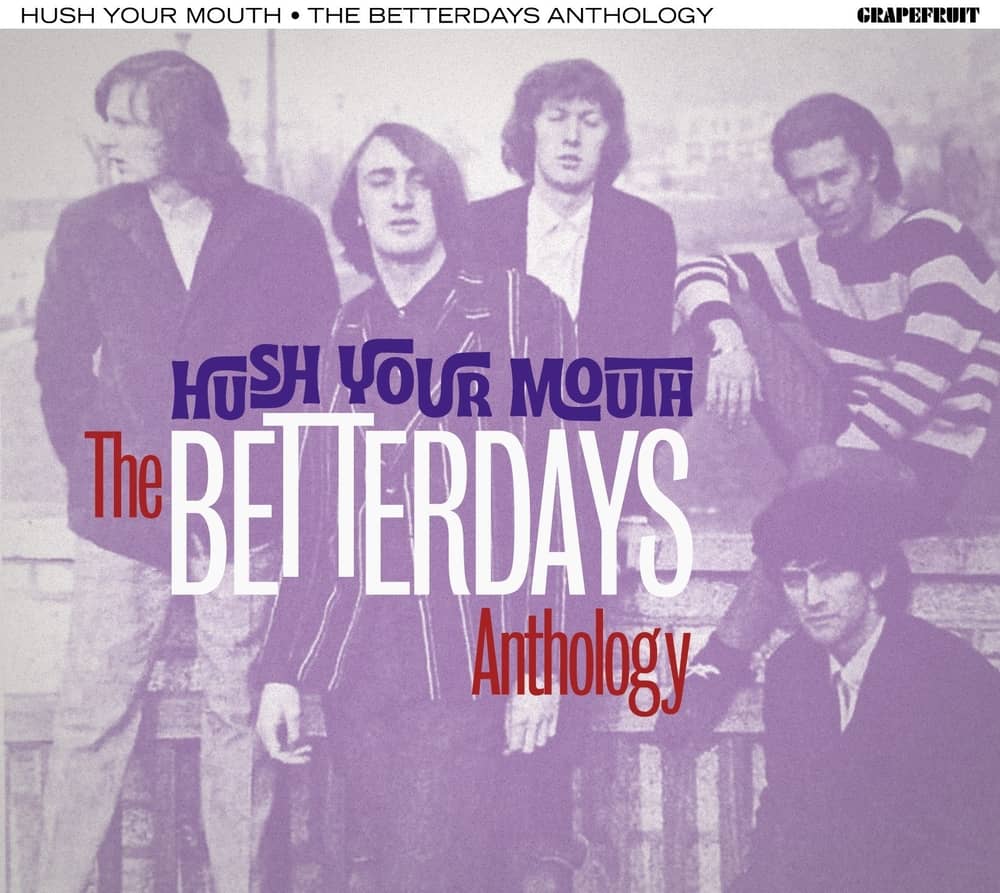 2CD anthology of the West Country’s answer to The Rolling Stones and The Pretty Things, raucous Plymouth r&b rockers The Betterdays. This set includes material from the 1960s that was unissued at the time and the full recordings from their successful 1990s reformation. Ian Canty hopes for an improved tomorrow…

The roots of The Betterdays lay in early 1960s Plymouth instrumental combo The Saints, a group of school pals including guitarists Richard Broczek and Oakley St. John Petts and drummer Frank Tyler, who tried gallantly to ape their heroes The Shadows. As the appeal of copying Hank Marvin and Co began to wane, Mike Weston purchased Pete the bass player’s equipment and inherited his role in the band. Mike had traced the strong blues influence in rock & roll and as a result knew some rare r&b nuggets, something which would be pivotal to the band’s future direction. The Saints soon added singer Mike “Shane” Hayne to their line up as part of a move away from the instrumentals. Oakley St Jones Petts, the band’s original leader, rallied against Weston’s call to cover some harder-edged blues numbers. Something had to give.

After the rest of the band saw the value of moving forward into the beat group future of The Beatles and The Rolling Stones, Petts left and they took on the slightly “on the nose” moniker of The Saints Beat Combo. The final piece in the jigsaw was the arrival of pianist Rob Pitcher in July 1964, giving them a different aspect to the many other outfits bashing out tear-arse r&b. Just after this, they tweaked the name to the somewhat snappier The Betterdays. After some gigs with The Pretty Things and Gary Brooker’s Paramounts, they travelled up to R.G. Jones’ studio in Morden to record some demos, returning in the new year to again put down a few sides. They looked the part too, with a wild image of ultra-long hair and cool threads.

Though the band travelled quite often to engagements in London, they never decided to up sticks from Plymouth and try their luck in the capital. Part of the reason for this is that they had a steady stream of live work which enabled them to earn a decent living.

This was a bit of a double-edged sword for The Betterdays. On one hand, it was great that they could cock a snook at the almighty metropolis and didn’t need to uproot themselves to be professional musicians. But on the other, they never really gave writing their own songs a real try. As the crowd pleasing blues covers did the job on stage and there was no-one demanding fresh material for a pop audience, there wasn’t the need. A shame, as the scant evidence of the very good Don’t Want That single recorded for Polydor in September 1965 does point to them being capable of writing decent original material.

With fashions swiftly changing, The Betterdays lost a couple of members plus momentum and the band eventually grinded to a halt in 1966. They did reconvene however in the early 1990s, initially for a hometown gig that went so well they played more shows and released two EPs of their 1960s efforts. These sold encouragingly, so they recorded an album No Concessions in 1994. In 2017 came the Backlash LP, which plundered their unreleased reformation tunes and was termed by Mike Weston as the album they should have made during the 1960s.

Hush Your Mouth begins with both sides of their sole single for the Polydor imprint. Don’t Want That is a fine dose of raging rhythm and blues, the Bob Pitcher tune makes me wish The Betterdays had invested more in their own stuff. The version of Bo Diddley’s Here ‘Tis on the flipside is full of energy, making for a classy 7 inch combination. Though the band wouldn’t release anything else back then, those R.G, Jones demos were cut in October 1964 and February 1965 and they make up the next five tunes. The title track is lowkey, but cool with some good guitar work and Honey What’s Wrong? is full of proto-punky power.

Then we find the band in what appears to be truly in their element, live in concert at the Quay Club in August 1964. Crowd noise to the front, it is very lo-fi, but this section crackles with atmosphere. Jimmy Reed, a favourite of the band, has his I Wanna Be Loved given the spirited Betterdays’ treatment and they groove on the Hooker/Bracken standard Dimples. Who Do You Love receives a suitably manic shakedown, with a thudding Walkin’ The Boogie ending what is an authentic trip back into time and a very enjoyable piece of Hush Your Mouth.

As stated above, in 1990 The Betterdays reformed after a chance encounter between Mike Weston and drummer Frank Tyler and released the album No Concessions a few years later. I must admit it was relief this was not in the 1980s, as anyone who has heard The Creation’s lamentable Psychedelic Rose album will agree. I love that band, but hearing tinny production quirks of the 80s applied to a classic like Making Time was something I had no wish to repeat. Thankfully we have here a nice simple production job that lets the reformed band sound in 1990 not much altered by the intervening years, showing first two items that never made the cut for No Concessions, a spunky live version of Roadrunner and the flowing keys of I Was Fooled.

Then we have six tracks that were released on the LP, ensuing with the fine and feisty Howling For My Baby. A gritty-voiced Working Man swaggers impressively and I Ain’t You’s tough attitude would surely have put the wind up any young pretenders. On this part of the set The Betterdays are full of fire and unpretentious rhythm and blues fun. This continues on the last three items on disc one, an unissued and powerful 1992 recording of Got Love If You Want It with searing guitar and cool keyboards, plus a second go at I Was Fooled and a slowish Bright Lights, Big City, both from the 1990s but only issued on 2017’s Backlash album.

Disc two of Hush Your Mouth is the remainder of the Backlash album’s tracks. It begins relatively tamely with the pleasant enough beat pop style of Cracking Up, before an electric I Can Tell ups the ante. Raining In My Heart is a good r&b slowie and a second take of Working Man grinds along in gritty fashion too. A harp-powered I Wish You Would has everything you could want from a moody rave up and Howling For My Baby is totally convincing and raw with great slide playing. Though as you would expect there isn’t any freshly penned numbers, The Betterdays sound great and topped up with a vigourous energy of a band half their ages here.

A full-blooded cut of John Lee Hooker’s Boom Boom (like I Can Tell, this song also cropped up on the first Dr Feelgood album) is impressive, with the chance for a cool bit of piano in the breakdown section. Help Me is a very smooth soulful strut that screams 1965 and Willie Dixon’s Pretty Thing gets a riotous and red hot makeover. The great thing about this disc is that no-one has tried to glue any modern nonsense on top of it – this is exactly how I can imagine that The Betterdays sounded back in the 1960s, taking on all-comers in some Plymouth nightspot.

Even on a pure rocker like Hey Josephine you can imagine them ploughing through it at high energy down at the local hop. Organ swirls abound on Treat Her Right and Too Much Monkey Business really rocks. It’s left to I’m Too Poor To Die with its more than a hint of Trouble and a second and tumultuous motor through Bo Diddley’s Road Runner to bring things to a close.

It is a pity that The Betterdays didn’t record more back in the 1960s. But the seven studio tracks at the start of Hush Your Mouth gives us a taste and they certainly made up for lost time in the 1990s by putting down a whole host of prime r&b numbers in great fashion. The Backlash selection on disc two is conducted in the kind a manner which shows they really meant business in the 1990s – they were in effect making up for lost time and determined to make the most of this second chance. What it may lose in being not cut “back in the day”, it gains in the total authenticity of the performance.

The Betterdays didn’t make much of splash outside of Devon in the 1960s, but from what can be gleaned on Hush Your Mouth they could certainly hold their own with the brand leaders in kick-arse, hell for leather punky rhythm and blues. A very enjoyable, lively listen right the way through.