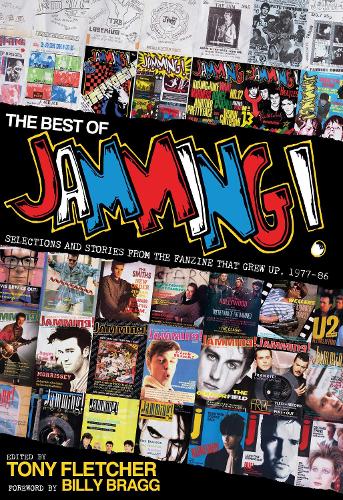 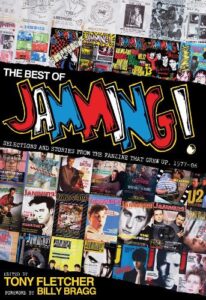 Tony Fletcher
The Best of Jamming
Omnibus Press 2021 (out now)

I’m sure most of us music obsessives have dreamt of doing our own ‘zine at some stage. Not many people though make the full journey from nicked school exercise books to full national distribution and the shelves of WH Smith. This is what Tony Fletcher achieved between 1977 and 1986. As always with Omnibus, it’s a handsomely produced and profusely illustrated book. It’s great following the mag’s visual evolution from handwritten beginnings, thru the typewriter and paste phase, then an underground press look, before expanding into coloured layouts, finally erupting into design overkill for that time in the ’80s when every mag wanted to look like The Face.

The book contains extracts from all 36 issues of the magazine. Naturally, the main focus is musical, but there’s also room for books, poetry, sports, fashion, films, graphics and of course, being the 80’s, VHS tapes. Starting from a textbook UK Punk Jam/Damned/Clash/Pistols stance, the magazine went on to record and anticipate many of the scenes that followed like electro, early indie, world music, reggae and folk/roots.

Starting from a schoolboy fixation with (inevitably) The Jam – the Fall were another great favourite – Jammin’ expanded from being a punk/post punk version of Zigzag, based mainly around live and record reviews from serious enthusiasts, to carrying lengthy interviews with nearly all the major players of the time. There are some really good ones, where the interviewees are less guarded than with the mainstream media, including revealing chats with everyone from 60’s figures like Pete Townshend and Paul McCartney, and major punk players like Elvis Costello, Paul Weller, Jerry Dammers, and post punks like Robert Smith or the Cocteau Twins. There’s also plenty of coverage of the Crass/ anarcho punk scene and looks at what’s happening regionally and in Europe. In keeping with the punk ethos – and later RAR activity – there was always a political and social awareness to the mag, as shown by features on the miners’ strike and the campaign against fox hunting.

It’s a fascinating reminder of the diversity of the scene then. At random you can dip in and rediscover people like Virginia Astley or groups like the Au Pairs, but it also tracks the emergence of hip hop, the UK reggae/MC scene, and the early utterances from future 80’s megastars like REM and the Smiths.

Since then Tony Fletcher’s gone on to write some impressive music biographies – I’d recommend the Keith Moon and John Entwistle ones to anyone with more than a passing interest in the Who – and he’s also written books on the early days of the New York hip hop scene and Wilson Pickett to show he doesn’t just do white blokes with guitars.

All in all, it makes a great time capsule of a really vibrant time in music and related scenes, and it also works on a personal level, starting from that most basic music lover question, “Hey have you heard this?”, to sharing that love with like-minded mates, before taking it out into the market place and dealing with the big beasts of the marketing and distribution worlds.

So whether you’ve been into the Jamming world all along, or just need reminding that there was a whole lot more to the decade than shoulder pads and Wham! This book is a really stimulating record of some diverse scenes that’ll have you digging out all kindsa stuff you haven’t heard in aeons – me? I’m off for a bit of Delta 5…